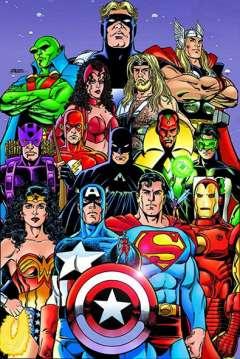 "The cops of [Gotham Central] are the best [Gotham] has and being a Gotham cop is hard. They [operate] in a city where Killer Croc is not considered a major player and that is creepy. I love Marvel but honestly, if you set DC’s rogues loose in The Marvel Universe for just five minutes, they’ll come back to The DCU drinking Pimp Juice from Spider-Man’s jewel encrusted skull."

That was taken from a couple of Thor's Comic Column reviews that I, Devon of "Seven Hells!," have done over the last two years. Ideas, that while talking to Scip yesterday, spawned forth, a beautiful, wonderful idea.

DC and Marvel Comics NEED to hold a draft. A draft where characters can find a "home" after being overshadowed by far superior heroes and villains.

Let's face it: some characters work better than others. The Joker is a once-in-a-lifetime treasure. Marvel's Turner D. Century is a dime-a-dozen villain, worthy of a bullet in the head and yet, I wonder what he could have accomplished if he were afforded the respect of say a DC villain, like....I dunno...Chronos or The Clock King?

With that being said, I'd like to formally offer up for trade to Marvel, a character tailor-made for the Marvel Universe.

He's got everything a good Marvel villain needs. He has super-strength! He's misunderstood, a victim of circumstances beyond his control. He is a former professional wrestler as was the hero to whose Rogues Gallery I'd like to see him join. He is a thief, a master extortionist and a finer pimp you'll never find. He is...

Marvel you need this monster! With the majority of Spider-Man's villainy (The Scorpion. Dr. Octopus. The Vulture. The Grizzly.) adopting some sort of animal totem, he'd fit right in. With the original Scorpion, Mac Gargan, currently filling the role of Venom, someone needs represent the "reptile" in Spidey's menagerie.

Who better than Killer Croc?

In a universe where killer clowns massacre innocents using poisoned fish, the DCU has little use for a super-powered pimp with a rash.

Killer Croc has super-strength AND he was a wrestler? So was Spider-Man. Marvel, can you imagine the carnage these two could inflict to downtown Manhattan? My God, I'm practically handing it to you!!!

What will DC take in return? Good question.

Seven Hells has a better answer....

Yeah, nowadays the only way to tell Croc from the Lizard is by the labcoat.

The Human Flying Fish would feel at home in the Marvel Universe, I think. He's just as lame as Turner D. Century and Leap Frog and the Trapster.

That guy and the Human Flying Fish could start a crossover team of Truly Lame Animal-Related Villains.

I was just about to say...doesn't the Lizard fill the correct reptile prerequisites enough for you?

How did Scorpion, a fellow arachnid and "the spider's only natural predator" leave a void in the reptile slot on Spidey's villain roster? The costume looked reptilian maybe.

I hate you and everything you stand for.

Ironically, Turner D. Century actually was shot to death in Cap America# 320 by the Almighty King of Villains, The Scourge of the Underworld!

PASTE POT PETE to DC.
That ain't all.
DOSESTE!
And that's not even mentioning TATEDECO!
With PATEDERE!
And don't forget the fucking REMPTATE!
And while you're at it, give us what ya got on the OPESS-
ROMTRY!
MITT- RY- got a DUSTORE?
With FEDISHER ACTEL?
Better act fast if you want or don't want, to be in
" KANSAS KINGS".

Hey, just saw this. You make a very compelling argument for trading Ol' Crocy to Marvel. I can see it. Hell, the Lizard would have either a new friend or rival for Spider-Man's attention.
I'm defintiely stealing this idea of a draft for a future blog post. Thanks, and Happy Holidays.