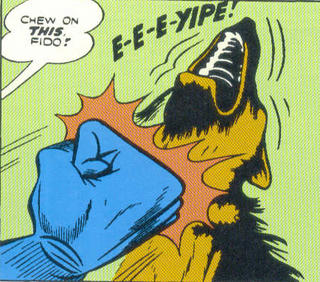 Yikes, if you thought Batman was hard on his human assistants ... poor Ace!

But remember, Batman and Robin are not Perfectly Ordinary Americans.

Perfectly Ordinary Americans do not hit dogs. With a sock to the jaw. While making jokes.

People like that grow up to become serial killers, Batman.

FYI, readers, a bit of advice from a dog professional. If you are in an altercation with a violent dog, trying to sock him in the jaw makes about as much sense as putting your hand into a garbage disposal. A dog's reaction time is much faster than yours, and it will simply shred your fist with clamp-like jaws that are lined with 42 nearly unbreakable bonecrushing arrowheads and that can exert the same amount of pressure as that within a locomotive's steam engine ... in some cases, more.

Then you will be the one saying "e-e-e-yipe", at least until you pass out from pain, at which point the dog will crush your trachea, then start eating all your soft parts.

Ohh lord, that's freak. But I'll try to be ready for any situation...

Yeah, and don't get me started on what would happen if

were unhappy with you.

(1) How are you a dog professional? Whaddya do?

(2) Look, if Batman can dodge bullets, he's fast enough to punch a dog. He's better than us, you know.

(3) No, we shouldn't punch a dog. If a dog is menacing you, you should pull its ears.

Among other things, I run a dog care facility. I personally see at least 50 dogs a day.

I do not try to punch them.

Shouldn't you sock it in the nose or something?

Or attack its gills?

Bless you Scipio, I like you more, the more I read your blog. I have a black labrador called Dinah, I'm a better person for our walks.