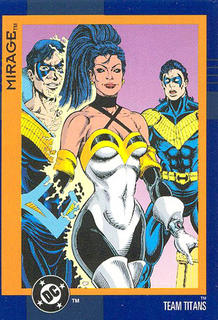 Here's one Mirage I wish would disappear!
If you don't remember Mirage... well, good for you. She comes from the New Teen Titans Annual #7 (1991); note that, as a general rule, any character introduced in any Annual is either slapdash, cheezy, or just plain wrong.

Let's send her to Marvel where she'll be fine. Why, you ask?

She grew up a street urchin in Brazil. I bet she even picked a pocket or two; sound familiar?

Instead of having a name tangentially evocative of her power (like say, "Gypsy" or "Spellbinder"), she is named, in the Marvel tradition, directly after the power itself: Mirage.

She was created only to complicate the social dynamics of Wolfman's Marvelesque New Teen Titans, where, in a typical Marvel "supergroup as dysfunctional family" plot, she fell for Nightwing and impersonated Starfire in order to be with him (didn't Mystique do that?). A sleeper agent like Terra, she found herself torn between good and evil. Oh, and she's a single mother (of course).

Joe Quesada, Mirage is in the mail!

as a general rule, any character introduced in any Annual is either slapdash, cheezy, or just plain wrong.

You mean, like Vibe, who first appeared in Justice League of America Annual #2?

Now here's a choice I can get behind. I look forward to seeing Mirage impersonate Emma Frost and jump into bed with Cyclops.

There are exceptions to every rule.

Vibe is an exception to MOST of them!

P.S. I have re-programmed an Ivoid, totaltoyz, and it knows where you live...

Fittingly, The New Mutants have a character named Mirage.

Here's one that you and I can agree on. Mirage does not merit a spot in the DCU.

On a related note, I had an epiphany the other day. Although you'll never convince me to join your side on the issue of the Fourth World characters (unless you arrange it such that they can only appear in books written by Gerry Conway), I realized that I feel the same way about the Eternals in the Marvel Universe that you do about the Fourth World in the DCU. Why the New Gods work for me and the Eternals don't is an issue for another day.

I have re-programmed an Ivoid, totaltoyz, and it knows where you live...

Ah, but if I am destroyed, you lose your source of custom HeroClix!

Ah, well, Amazo will be coming with it to absorb your super-customizing powers before the Ivoid strangles you.

We supervillains always have a plan, you know.

Tommy Monagham and Rogue were both introduced in annuals. Psylocke was introduced to te American audience in an annual. I would consider those characters some exceptions. Generally, however, it's a good rule.

she fell for Nightwing and impersonated Starfire in order to be with him (didn't Mystique do that?)

Oh, come on, we've all done that at some point or another!

I think you're onto something with this "introduced in an annual" theory. Godiva was also introduced in a Teen Titans annual, and jesus god does she suck as a character.

Godiva had prehensile hair; always a classic. Useless, but classic. She was supposed to be England's biggest superhero in the DCU, so I guess it sucked to be an English person with supervillain problems.