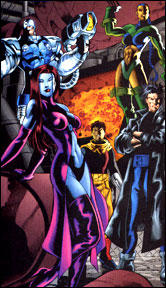 Good lord, who's responsible for putting this bunch in the DCU?

Like any good Marvel X-group, they are carefully composed for ethnogeographic diversity (an American, a Japanese, a Puerto Rican, and, yes, I know Puerto Ricans are Americans, a Russian, and a *snort* "sadistic Australian"). They each have a stupid "Compoundnoun"-type codename (Breathtaker!, Provoke!, Stranglehold!, Shock Trauma!, and, gods help me say it, Killshot!) based on how they kill people.

I swear whoever comes up with these crappy groups must create boy bands as a second job ("You, you'll be the one with Mental Powers." "Um, no, I'm the Cute One, sir..."). These people are supposed to be "the next generation in assassins", and they'd be laughed out of Legion Try-Outs in one panel: "I'm sorry, your power of super-wind-sucking would be useless during our conflicts in airless space! Next!"

I'm pretty sure that they only appeared one time in the DCU (Teen Titans 21/22) ... then the editors came back from lunch. Ship this motley crew off to Marvel where they can become some sort of X-villains, because in the DCU they are nothing but "Why?-villains".

In some ways, your "donations" match the kind of things that are often fobbed off to the Salvation Army or the church basement: broken, outdated, garish things that no one will ever buy, certainly not at _these_ prices.

> Maybe it sounds better in
> Japanese.

No, if it was Japanese he woulud have been called something like Hamburger Bunnyrabbit or Prince Sparkletoes or something.

One time my friend and I were waiting for a late train, and just for the hell of it we came up with, on the spot, a totally generic and predictable superteam, the kind you see in a double-page spread with captions for each of their names and loads of motion lines. Ravage (cynical killing machine leader)! Firewood (some kind of pyro energy guy, probably had plasma blasts)! Dethblow (the muscle)! Transmo (the shapeshifter)! Lady Synisteria (the woman)!

These guys remind me so much of that little exercise it's sad.

I think you and friend have inspired me to do something.

Watch for it, because you'll be mentioned.

They are indeed very claremontian. In the final issue of Sovereign Seven, it was revealed the characters had never existed and they all went back to St.Elsewhere/Franklin Richards'brain.