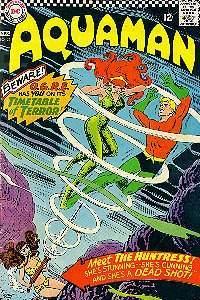 Now that Hal Jordan is back as Green Lantern, what will the H.E.A.T. people do?

I hope they'll switch their energies to advocating the return of: O.G.R.E., the Organization for General Revenge and Enslavement, a recurring Aquaman foe of the 1960s.

Why, there they are now in the person of "The Huntress", that bikinied beauty bothering Arthur and Mera with her Underwater Disturbing Concentric Ring Bazooka. A bikini; yes, that's just what I would wear while attacking the sovreigns of the sea. A yellow bikini with polka dots, just like in the song.

Perhaps it's not a raygun. It could be a submarine music cannon purchased from the Pied Piper by O.G.R.E., who're using groovy go-go tunes to force the Aquacouple to irresistibly frug themselves to death. I mean, it is the 1960s and they broke out the "go-go checkerboard" for the first time on this issue, so it's possible. And dangnation, Arthur's got moves I haven't seen outside of a golden cage suspend above the dance floor! You go, girl!

Nah. Mera may be a wacked out other-dimensional hippy-chick with her headband and shiny one-piece, but Aquaman's got super-squareness to spare. He'd have no trouble resisting (unlike some undignified heroes who broke into the Batusi during their first TV episode), then he'd give you a lecture about underwater gun safety to boot, while commanding flounder to cover your near-nakedness with kelp.

Back to O.G.R.E. These aren't wild-eyed acid-scarred loons; these are the Executives of Evil, the MBAs of Malevolence. It's not about personal revenge and enslavement; it's just general. We don't care who you are, we'll be revenging ourselves on your neighborhood soon and enslaving you. Nothing personal, just business. You see, we've got you on our TimeTable of Terror. "Now terrorizing Number 47!"

At one point, they hired Black Manta to distract Aquaman for them. So businesslike! I can just see their brown-suited lawyer with a fishbowl on his head handing the underwater pen to Manta, "Now, initial here, here, and finally here..." Now, you know they're players if they can get Black Manta to work for The Man.

If an employee fails, they kill him; saves on paperwork. Their CEO was called the Supreme One, which looks great on a desk nameplate. Once they kidnapped the entire goldarned U.N., which puts the Batman's United Underworld to shame.

DC should update O.G.R.E. a bit and bring them back to bedevil Aquaman. I suppose, in a sense, they have! ProGenTech, which sunk Sub Diego and patented Aquaman's DNA, is just a classier, more modern version of O.G.R.E. , after all...
Posted by Scipio at 6:27 PM

So, not that I'd object to an O.G.R.E. revival, but I think your energy in Aquaman villains revival arguments need to be directed toward Fire-Haired Karla and the Invisible Un-Thing from issue 24 of the first Aquaman. Only full-fledged super heroes could stop these slippery characters. Or at least The Brain from the cartoon series.

The man-hating Fire-Haired Karla needs to join Wonder Woman's villains, I think. A woman whose hair is on fire is not a sensible opponent for someone who lives underwater.

The Invisible Un-Thing .... I can't believe Morrison hasn't snapped up his contract yet!