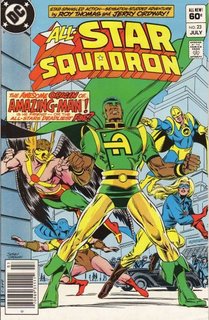 Or, as I always like to think of him, "Amazingly Brittle Man". I'm sorry! That joke just kills me every time; of course, it had the same effect on Amazing Man...

I'm pretty sure he was mostly created as a backstory for Amazing Man II, his grandson Will Everett II. Neither of them got a lot of airtime, as they never caught the public's imagination. They each had the power to mimic the properties of whatever substance they had most recently touched, which not only sounds more like a horrible disease than a superpower, it's so abstract as to seem suspiciously like a ... MARVEL power. Isn't there a Marvel villain who does that? Mimic? Mimeo? Zeerox?

I don't remember how Amazing Man I died, but everyone remembers how Amazing Man II died. The Mist's daughter tricked him into becoming glass, then shattered him while making the "Amazingly Brittle Man" joke.

The worst part about Amazing Man is that he takes time away from 'Mazing Man.

Stealing 'Mazing Man's thunder is only the second worst thing.

There are (at least) two! Marvel characters that have such powers: Crusher Creel, The Absorbing Man (a Thor(?)villain whose abilities were sort of co-opted for use in the Hulk movie) and Metalhead, a mutant musician from X-MEN 2099.

I think his real name was Eddie Van Beethoven, which meant that he deserved everything he got.

All Star Squadron was a pretty good read in it's day, especially when Ordway was drawing it. I would never buy it of course, back then my money was reserved for New Teen Titans and Legion of Superheroes. But my local library kept a huge stock of DC Comics. And if they had All Star Squadron, I signed out as many as I could find. Harmless fun and a good way to get aquainted with DC's golden age characters.

Though I do wish they had given Amazing Man a better codename.

Actually, I hate to contradict you, but there *was* an actual Golden Age Amazing Man - he just wasn't published by DC or National. From http://ratmmjess.tripod.com/ga/golda.html - "Amazing Man's powers include great superstrength, invulnerability, and the ability to "make himself disappear in a cloud of green vapor."

Amazing Man I was introduced first. He first appeared in All-Star Squadron #23, in the early 80s. Amazing Man II was not introduced until sometime in the 90s, and not by Roy Thomas.

That was a joke? Man.

No wonder The Mist shot her. His Standards of Villainy are Somewhat Exacting!

What makes a power a "Marvel" power, and what makes it "DC"?

You can see why DC got rid of the multiverse, if you try to read, say, twelve issues of All-Star Squadron in a row. A little bit now and then is fine, but too much and you get hung up on Dr. Fate's full helmet/half helmet switch, and which mask Hawkman is wearing, and if Atom is wearing pants or shorts...yeah, I think I understand why DC decided to wash their hands of that. At sixty cents an issue, that devotion to obscure detail might be understandable; at $3.25, not so much.

As to what makes a "Marvel power": my theory is this. There are only so many super-powers and variations thereof. When Marvel was a-borning in the early Sixties, almost all of them had been done. Stan was experimentative, trying new and sometimes unwieldy applications. The "Absorbing Man" power, like it or hate it, was unique. So, too, were villains like Doctor Octopus, the Grey Gargoyle, and Stilt-Man.

I could totally figure out a way to resurrect Amazing Man II. And, good job, James Robinson: we have, like, three decent black characters--kill one!! (See also: Misogyny: Dibny, Sue).

And when did I say it did?

Hm. That is the opposite of the point I was hoping to make with my Black History Month profile series...

And, as this post clearly points out, Amazing Man was NOT one of the decent characters!

He was unpopular, he had no character, his power was lame. The only memorable thing about him WAS his death.

To paraphrase one of my favorite quotes: was ANYONE clamoring for an Amazing Man comic before his death? For that matter, has anyone been asking about him since?

Heck, even the RED BEE has been featured in a comic more recently than this chump.

Also, he's not dead. His grand-pappy got blown to bits whilst in a brittle form by (I think), Usil, the fascist Italian archer he beat in the Olympics. I think that was in issue 2 of Young All-Stars, featuring Extra-Racist Sandy and nice solid golden age-style colouring.

Oh, and he was fine. He got blown to bits defending Dr. Mid-Nite, and then he wandered on later rubbing his neck and saying, "whoo! That tickled!", or equivalent.

So - I take that to mean that Amazing Man's probably not dead.

The Absorbing Man gets blown up or hacked to pieces on a regular basis. I've read somewhere that many of the characters picked for that version of the JLE were picked because it would be fairly easy to ressurect them, like Blue Decil. Crimson Fox though was probably meant to be really dead.

Ultra-Humanite gave Amazing Man I cancer somehow through lots of radiation or something.