Monday night, I got my butt whipped at Heroclix by certain people whose name escapes me.

Now, I suppose I was asking for it. Taking advantage of the fact that Vixen, the Elongated Man, and Sue Dibny (a pog) were in the new DC set that just came out, I fielded a Justice League Detroit team, adding in the Martian Manhunter, Zatanna, Aquaman, and my customized Vibe. I said that Steel was off getting a lube job, that Gypsy was there, but being unseen and irrelevant (which were her powers), and that a Veteran Thug was Dale Gunn (Zatanna carried him around). I may not win a lot at Heroclix but I sure do have fun playing. Besides, Dale Gunn kayoed Blackfire; I think she refused to bring him cookies or something.

Anyway, the only way certain people could win was by having a Confederate soldier (Jonah Hex) and Mr. "Uncle Tom" Terrific shoot down a defenseless black woman (Vixen) as she tried to stroll innocently past them to go feed the woodland creatures. "Have you no shame, sir?" I said. "You are a traitor to your race." Certain people replied, "The only races I'm part of are ones where I finish first." Curse you, Sanders!

But that's okay. Why? Because at my house, it's not about who wins per se, but who has The Most Fabulous Moment of the Game (something that should included in formal competitions, I say). And that was me....

Vibe was surrounded. Hemmed in by Power Girl, Hawkman, Hawkgirl, Kyle Rayner, he was about to get clobbered, and his attempts to distract them with a sexy little dance were having no effect (well, Kyle started to blush, but it only stiffened his resolve). Paco prepared to use his "Pulse Wave", which, if he rolled a high enough number, would ignore all their defensive powers and do two clicks of damage to each of them. But even with J'onn J'onnz using one of his mental powers ("Perplex") from a distance to help increase Vibe's chances, it looked very grim.

Until "Paco" rolled a 12 (which counts as an automatic hit and adds an extra click of damage dealt!), knocking them all away from him 3 squares (some of them into walls, causing them even MORE damage). 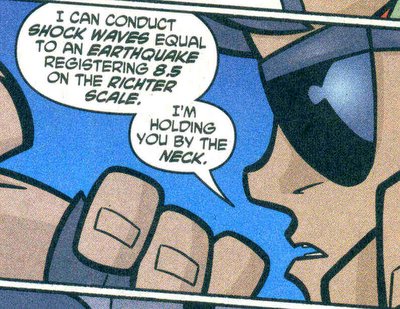 Sounds fun! I've always wanted to learn Heroclix, but frankly, it always seems pretty daunting. Christ, it took me forever to learn how to play Magic, and I never really was very good.

I wonder if one of my LCS has a beginners class or something.

A lot of shops do. Most shops that sell them have someone who can teach you.

A little patient with the instructions and you can teach yourself; plus, there is copious on-line help.

We play every week. Many people want to play but don't because they don't know anyone who does. Learn the game yourself, then teach people who you want to join you; that's what I did.

It seems like if the game was faithful to the characters in the comics, any team with Jonn Jonzz would win. The Martian Manhunter is possibly the most powerful superhero Dc's got.

The Martian Manhunter clix needs to be redone, to give him the necessary "oomph."

And as much as I love Collateral Damage, Vixen got hosed. Sadly, she's poorly designed, poorly represented, and poorly sculpted. With her weak interpretation, and the way Deadshot got jobbed in a previous set, my Suicide Squad theme team will NEVER be competitive. (Thank goodness Enchantress and Dr. Light are pretty snazzy.)

Yes I am SO powerful. I order Scipio to do more H3s and Starman dramas or I will suck him up with my Martian Breath. After all I suck a lot!

"Deadshot got jobbed in a previous set,"

Actually, I though he got better dials than he deserved.

As for the Martian Manhunter, what he needs is an REV set rather than just being a Unique. That way he can be used at different power levels.

Actually, I though he got better dials than he deserved. -- Scipio

I apologize in advance for hogging your bandwidth, AND for arguing with you in your own sandbox, but...

At worst, Deadshot is DC's Bullseye. The Vet Bullseye fig (43 pts) starts with an 11 Attack--that he can share, too.

Ol' Floyd needed a dial to reflect that he's DC's best (villainous) marksman...and from the above, means that he deserved an 11 Attack, natch. I don't mind his low Defense and lack o' defensive powers (chalk it up to his much-ballyhooed death wish), but he at least needed some Willpower, or a 10 Range, or something. At 71 pts, he's paying through the nose for Running Shot (which will vanish upon taking his first hit) and that Squad team ability.

I'm one of those players that really cares about "character accuracy" in my clix, and to this Suicide Squad fanboy, Deadshot was...lacking.

I understand! As is almost always the case, the things boil down to how you perceive the characters involved. Most significant characters have been around long enough to have been used many different ways. People tend to pick one way as "their version" of the character and measure other versions against it.

I wasn't a Suicide Squad fanboy. To me, Deadshot is just the guy who plotted revenge against Batman for ten years, then got his ass kicked in under 3 minutes while fighting on a giant typewriter. You can understand how, from my perspective, he's just "another guy with a gun."

"a Veteran Thug was Dale Gunn"

He should have his own figure, with the power that he distracts all females in play with his awesome manliness.

What WOULD be on Dale Gunn's dial?

Toughness. I mean, the pours malt liquor on his Wheaties.

Perplex. For making the ladies go "swoon" and the guys go "what the--?"

Support that only works on ladies and robots.

I think my most fabulous moment of any Heroclix game was getting my should-be-JSA-ability Ma Hunkel to take down Vet Kid Flash.

I'll second your REV Martian Manhunter suggestion, especially since his Unique is retired this year. I've not nearly gotten enough opportunity to play him.

I really respect the fact you play teams for fun. I can't wait to put together my "I Can't Believe It's Not the Justice League" group once I finally get a couple Vets I need.

You might've had the best moment of the game, but Devon had the best line. "The only races I'm a part of are ones where I finish first." Classic.