That's love. Remember, everything has pros and cons, and if you're not in good relationship on Valentine's Day, that's worlds better than being in a bad one. Meanwhile, read "Batman and the Monster Men", and fall in love with comics all over again. Oh, and because poetry is the language of love, help Hugo compose a Valentine Haiku for Batman.

Also, The Comic Treadmill is running a poll on superpets. At first, I was insulted that monkeys are not eligible, but then I realized that's because monkeys would automatically win. That gloryhound Krypto is beating the figurative pants off Topo. Topophiles, represent! I, and the other members of the North America Man/Octopus Respect Association, implore you to support Topo, who is our celebrity spokesmodel and Aquaman's special friend. 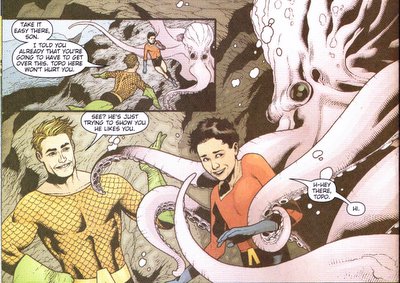 O studly Batman,
How my pants are aquiver.
Please assault my lab!

You nailed the reason why monkeys are excluded. We wanted some suspense in the poll.

And as much as Krypto rules, I too voted for Topo, because he's mastered his many accomplishments without the benefit of super powers.

And another, not insignificant, reason for excluding monkeys from our latest poll. We were afraid that if we included monkeys, people might get easily confused and vote for their favorite planet instead.

What is this feeling
Normally Hugo digs girls
I'm gay for you, Bats

Oh my sweet Batman
Know the joy of my test tube
And I, the Bat Pole

It is forbidden
This love of ours, my sweet Bruce
This Brokeback Gotham

Geoff; I was going for the NAMOR joke ya see...

Simply replace "respect" with "romance" and you've got your NAMOR.

My verification is "izbikg" -- is that what Carol says when she's a little tipsy?

Batman would rather
foil my plans than sleep with hot
redheads. He loves me.