"No, thanks, miss!" I have to remember that line...
The little gem at left from the recent Day of Vengeance special lends even more credence to my theory that Blue Devil is basically Hellboy's gay little brother.

Okay, we've already show in previous posts that Zatanna's a slut and Blue Devil's a big old queen (see the scene at left for another example of that). But I didn't think we'd find evidence of both in the same place: 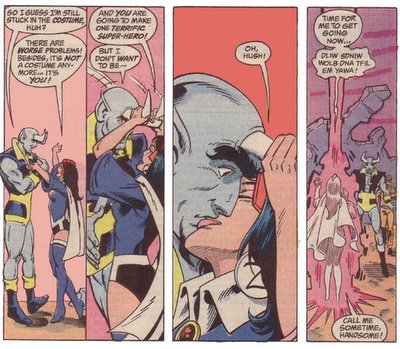 Could BD look more mortified and unresponsive in panel 3? I'm not sure how.

One has to note that during his original career, Blue Devil was, as mentioned in panel 1, stuck in the suit. This was a special-effects rig set up for some movie that probably had some kind of small opening or tube-and-bag rig set up for, um, waste disposal during extended shoots, but was (A.) not anatomically correct on the outside, (B.) fairly rigid, and (C.) probably not particularly, ah, *roomy* down there. Which is to say that if he was responding, it would be an exceedingly painful experience very quickly.

Now, later on Neron transformed him into an actually devil. But it's still even odds it wasn't an anotomically correct one...

Wow! I'm not the only one who has thought about Blue Devil's anatomy.

I always thought the real reason BD agreed to Neron's deal was to get his penis back.

Oh and I feel honored that Scipio used my scan of BD & Zatanna.

It's got to be too creepy.

My theory is the Red Centipede Hat is some sort of magical incubus that latched on to Zee and controlled her libido through the 1970s.

The real Zatanna isn't like that at all, I'll wager.

If I recall that issue (Blue Devil vs. the Mexican army as the cover proclaimed), BD says something like: "Lady, most people couldn't pull off wearing a bug on their head but on you, it looks good"...

Don't blame Blue Devil. We all know you can't get excited over 1980s Zee minus the fishnets.

"Lady, most people couldn't pull off wearing a bug on their head but on you, it looks good"...

It's not a centipede, it's a giant one of these parasitic tongue-eating ispods.

"The real Zatanna isn't like that at all, I'll wager."

Let's remember that Zatanna, without the red centipede demon-thingy on her head, dated John Constantine.

I think that pretty much shows where Zatanna is on the freak-o-meter...

Ouch. Hard to argue against that one, Jer...

Actually, I DO think she's a 24-hour freak, but I was trying to give the benefit of the doubt, for the sake of all those Zatanna-lovers out there.