By all the Stanleys, dead and gone... 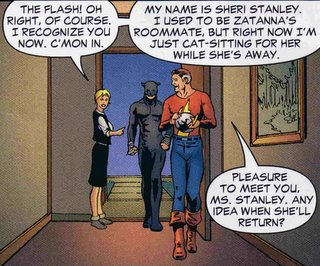 Something about the scene in JSA Classifed #8 where Ted and Jay go to Zatanna's NYC apartment had been bugging me, specifically, "Sheri Stanley", the woman who's looking after Zatanna's cat. She seemed ... familiar.

So, on a hunch, I looked in some old comics with Zatanna in them. Sure enough, there was Sheri Stanley, living at Zatanna's place ... 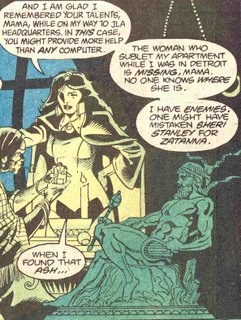 over 20 years ago. While Zatanna was in Detroit (throwing herself at Dale Gunn).

Which just goes to show you...

For every old comic book you've throw out or forgotten about, there's at least one writer who didn't.
Posted by Scipio at 9:01 AM

This is the kind of example of continuity that I do love.

It doesn't bog down the reader at all by having to explain itself.

A reader that wouldn't remember Sheri Stanley wouldn't know any better and somehow who would remember a reference gets a kick out of it.

Any reference to old continuity elements, especially anything older than say 7-10 years, should be done like this.

That whole sequence in JSA:C was pretty funny...

"She went off with that guy who dresses all in green and has all the arrows..."

remember when there used to be little editor's notes referencing past occurances? as long as they're not overdone, I always thought those were an elegant way to communicate a broader sense of history.

>> Something about the scene in JSA Classifed #8 where Ted and Jay go to Zatanna's NYC apartment had been bugging me, specifically, "Sheri Stanley", the woman who's looking after Zatanna's cat. >>

Whereas in my case, it's the picture on the wall, and the striking difference in perspective between the picture frame and the rest of the wall...

(Word Verification: "dllfsj"
I'm pretty sure when Tyroc screams this lubricants apply themselves...)
(Yes, I'm still laughing at that comment.)

Yay for continuity. :-) And comic writers with a better grasp of it than I do. :-)

If kurt hadn't mentioned that, I never would have noticed.

Now I can't stop staring at it.

That Zatanna and her love of wacky perspective-molesting art....

My word verification is Boopo, he am the Bizarro Super-Chimp!

PS hi, this is my first comment here, I've been lurking on your blog for a couple of weeks..it is hell cool! =D

If Dr. Fate has The House That Escher Built, Mr. Busiek, then maybe Zatanna can have The Painting That Does Not Work With Reality. It could be on loan? Yeah, I'll go with that. It's on loan. From Dr. Fate.
Maybe it'll turn up in a future issue of JLA Classified? It would be nice to see a story about something other than the Morrison-era League.

Actually, the painting's perspective looks different from that of the wall's bottom simply because it's higher up. The top of the wall should slope downward from the top right of the picture, but since the speech balloons are covering up this part of both walls (as well as the top of the door), it's not visible and ends up making just the painting look strange.

I've taken the liberty of extending the various visible straight lines of the walls, door, and painting to demonstrate that they do, in fact, converge at (roughly) the same vanishing point... http://photic.slimemansion.com/blargh/sheri-vanishingpoint.jpg

Sorry to spoil the fun, but I need that No-Prize!!

(Verification word: Eexucnjq. Sounds like a member of the Morrison-reinvented Aztec pantheon.)

I haven't read the comic in question, but it's funny how Sheri is all like, "Oh, I know who you are now," to the Flash. Was she mixing him up with another guy who wears a winged helmet, blue pants, and a red shirt with a lightning bolt on it? Did she think he was Captain Marvel?

And why does Wildcat look so small? The man's a boxer and Jay's a runner...he should be filling up that doorway with his hulking frame!

"Did she think he was Captain Marvel?"

As a matter of fact, that is exactly what happened.

Wow, they never really bothered to say what happened to Adam and his cult. Or Gypsy's hooker pal. Sigh....