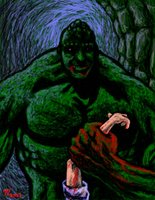 Yes, Killer Croc is black. Don't feel bad if you didn't know. A lot of people don't know, and others have simply forgotten.

That's because of Waylon's skin condition. Yes, Waylon Jones. Killer Croc has a real name, not that anyone writing in the last 10 or 15 years can be bothered to remember it.

At one time, he was a black guy, with a rough upbringing due a skin condition that made him a "crococile boy" sideshow freak, who eventually turned to crime. He wasn't a nice person, but he was a person.

He was more than just a thug, too. In fact, after he was introduced as a gangland enforcer he rose to become a big Gotham ganglord; he was the Black Mask of his day. He was clearly in the Gotham tradition of tortured soul turned to a depraved life, like many a great villain.

Then writers got lazy. His teeth got pointy. He got stupid. He started living in sewers. He started eating people (blech). All attempts at portraying him as a fallen person -- or a person at all -- were abandoned. He devolved (as Devon of Seven Hells well described it) into a Spider-Man animal of the month villain.

I really don't want to think that black characters are more likely than others to be used or suffer changes in a way that obscures their race to the reader. But things like What's Happened to Croc really give me pause... .

I rather liked him in Broken City. Dude just can't catch a break...

Yep. As underrated as that story arc was, Azzarello really did a goood job with Croc in his Broken City arc.

You know what was really creepy? I mean like Michael Jackson creepy?
Killer Croc and Baby Doll in the Batman Animated Series.
((shudder))

So true he could become "a Spider-man animal villain of the month". Speaking of Spider-man it's actually plot run so it doesn't care about it's villains so much. Are you going to do any Marvel characters like Luke Cage, BLACK Goliath or the Falcon. At DC there's still Black Racer and Black Viken (I think) in Kirby's Fourth World.

I think they should of stopped at the whole sharp teeth thing. Teeth=cool. Cannabilism=uncool.