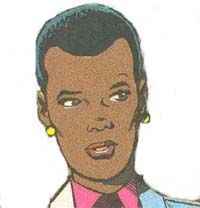 Do not lie. Do not pretend that you do not know who she is. I know you do.

Doctor Shondra Kinsolving is the physical therapist who helped Bruce get better after Bane broke Batman's back. Gods, I hate that stupid story.

Anyway, she just happened to have psychic healing powers; you know, the kind that can magically heal broken backs, since that's pretty much medically impossible? And she had an evil, white brother, which is very embarrassing. I have several myself.

She was also Bruce's lover (or was it just an unconsummated romantic interest? Who can say?). Setting aside the horrendous impropriety of that, it was, as far as I know Bruce Wayne's only interracial romance. Since Bruce can't have a permanent woman in his life, at the end of execrable Bane storyline, she regressed to mental childhood from, I don't know, stress or something. I guess it's better than getting thrown off a bridge.

A smart, professional black woman special enough to snare Bruce Wayne. Very groovy, and I'd love to have her back in his life -- IF she weren't associated inexorably from the worst of Batman in the post-crisis DCU. From her introduction, it was clear she was going to be a deus ex machina of the worst kind, and the collective mind of comic books readership has turned away from anything connected with the entire Bane / Azrael period.

Just under the wire there, Scipio.

I, um, liked the Knightfall storyline. It was, no joke, what got me into Batman specifically and comics in general, along with, sigh, the Return of Superman storyline.

I am proof that sometimes the stunts work, that sometimes doing shocking things to established characters brings in people who would not otherwise go into a comic book store.

I won't say they were great stories (though I still think Superman shattering the Cyborg-Superman was a pretty F&*# Yeah moment, and Batman literally both stripping Azreal of his costume and forcing him to see the light was a neat bit of symbolism). But they got me involved in the characters to the point where I still buy their adventures, hoo boy, 13 years later.

So yeah, Shondra's a crappy character. But I'm proud to say I know her.

Fun Fact: I know exactly who Shandra Kinsolving is, but I had no idea she was black. How is this possible?

Also, Batman's first interracial romance was, of course, Talia. She is, after all, the daughter of a 400 year-old Mongolian.

I really like Azrael. I dig all the pseudo-Catholic mythology that was wound into the character. Plus he was freakin' nuts. I like that in my characters.

Still, Denny O'Neil should *not* have been allowed to write him for 100 issues...

There was a throwaway line in Batman #609, the second part of Hush, referring to Dr. Kinsolving's fate - Oracle says "She got better."

Of course, instead of getting the lady with magical healing powers, they go get a traditional surgeon. Idiots.

Glad Mark there knew what issue Shondra was last mentioned, since I had nothing. Anyway, don't you think Bruce would probably be curious why his ex got better, but never came back to say hi? (Of course, it's not like Bruce had her picture on the nightstand either, but still.) Something smells like "restraining order."

Quite helpful piece of writing, much thanks for this article.
sci fi mmos | Side dishes recipes | mesothelioma cancer | carpet types | Salmon recipes