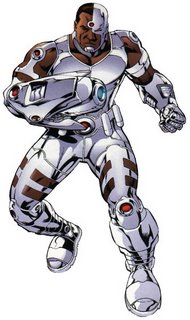 Poor Cyborg. He seems like a nice guy, but to like him you have to agree to ignore his cliche ridden origin. Son of Brilliant Scientists who test out their theories by Performing a Series of Experiments on their Son to increase his intelligence (to IQ 170). You know... like loving comic book parents do. Experiment on the children. It's a stupid and unnecessary story element; he's the son of two Brilliant Scientists, it's perfect sensible for him simply to be that smart.

Then he got "mixed up in athletics", to his father's disapproval. Yes, most fathers would be severely disappointed to have a son headed to the Olympics. Sigh. Again soundness of mind is pitted needlessly against soundness of body.

Oh, and even though his parents are wealthy scientists, and he's a genius and Olympic hopeful, he gets involved in gangs and injured in a gangfight. Jeez, it's like somebody dumped random "black character origin elements" in a pile and wrapped them in duct tape.

Oh, the cyborgification? Got munched on by a convenient extra-dimensional blob that his parents released while making out on a dangerous control panel. No, really. Lesson: old scientists are not supposed to make out. Sex will be punished by something horrible, like disease, death, or children.

At some point, he reads a Marvel comic with Ben Grimm in it, gets depressed, puts on a hat and trenchcoat and takes up residence in a "bad neighborhood" in Hell's Kitchen (maybe it was a Daredevil comic?). Like wealthy famous supergenius Olympic athlete superheroes do. Of course.

Oh, and would it have killed Wolfman to come up with a better name than Cyborg? I swear, I think Cyborg's the result of one of those drunken party games comic book writers like to have: "*hic* Okay, ya got 5 minoots to create a charac, urp, character, including origin, coshtume, powersh and name. A-ight, go!"

BUT. I will always love Cyborg for one story, written by Michael Straczynski in 1987's Teen Titans Spotlight #13, where Cyborg got kicked around by Two-Face. A moving story and one I'll never forget, one of the best Two-Face stories of all time.
Posted by Scipio at 3:17 PM

Could've been worse. They could've called him "Black Cyborg".
It's funny how, in comics, there are no categories of science like "biology" "physics" or "chemistry", but once you're a 'science genius' you can whip up groundbreaking, career-making innovations in no time at all.

That one issue of TTSO. Brilliant. It still had a letters page despite the 25 page count.

The all-purpose mastery of SCIENCE! is a long and glorious comic tradition. Take Marvel's Hank Pym--he's a genius in such similar disciplines as entomology, robotics, biochemistry, and AI Theory.

This past summer I was watching Teen Titans with my nephew, William. I asked him which Titan was his favorite. His answer? "The blue guy. (i.e. Cyborg)"

The best line in the Teen Titans cartoon came from one of the worse episodes.

In the otherwise heavy-handed racism episode, where Starfire is basically called a "darkie" repeatedly, she asks Cyborg if he understand how it feels to be judged by how you look.

And that pretty much answered whether or not Cyborg was going to be "the black one" on the show. And I think that having a character be black, without letting that be his defining characteristic (over, say, being human cybernetic organism), is a step in the right direction.

Okay, I love Cyborg - even his silly name that really is like something someone would come up with during a super-hero role-playing game character creation session.

And his origin is okay, as far as comic book origins go. The "scientists who experiment on their children" thing goes back to the pulps, so its in a fine tradition, if utterly horrible when you think at all about it.

But the gang stuff, that's just plain stupid. It reminds me of how Englehart munged the Falcon's identity on Captain America - from a social worker to a former pimp. It was a stupid retcon, but apparently "needed" because Falcon wasn't enough of a stereotype.

I still like Cyborg, though. I like him in the cartoon series even more, because the comic book version has a lot of baggage that the animated series can just ignore and get to the core of the character instead.