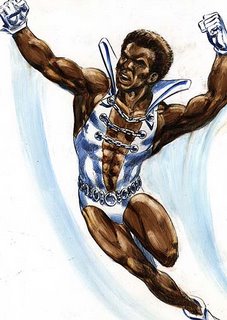 Ah, Tyroc. Or, as Devon of Seven Hells once called him, "Loud-Black-Man Lad".

Legionnaire Tyroc is from the other dimensional island of, um... Marzipan? Marsupial? Something like that. It was basically Brigadoon for Blacks. Guess that's how the 30th Century dealt with busing; who can say?

His power-- well, clearly his power is erotic fashion. Tyroc's from the Grell Era Legion, where everyone got their costumes at Dream Dresser. And he works it. He's part of the whole "Guys With Thighs" costume phenomenon (see Tempest's ridiculous outfit from yesterday). I used to think there was a "thing" with needing to show black heroes' manly thighs of mighty mahogany. Now I realize it's just because nearly every black male character was introduced in the 1970s. Or maybe Marzal (that's it: Marzal) was a tropical extradimensional island, and really hot? I mean, that's the kind of outfit I wear when it's hot.

Anyway, Tyroc's power was, um, screaming. No, really. Tyroc would scream and then ... things would happen. Whatever the story required. I mean it wasn't like he screamed "woman get me a sammich" and then a sandwich appeared; that might have been funny. Instead it was "YAHH!" and then he flew. Or things blew up. Or he got a better long distance rate or a better price on a muffler. Whatever. Just be glad Cary Bates isn't writing comics any longer. Hey, I know I'd be screaming bloody murder if Cary Bates were writing me.

People with sonic powers usually don't fare too well in comics, which (SFX notwithstanding) is a silent medium, and Tyroc was no exception. He hung around the Legion a bit, screamed at some bad guys, then went black to Black Brigadoon, later to be wiped away by Zero Hero. But in my mind he's partying with Vibe and Dazzler at the Marzal's hottest discos...

Visit the Museum of Black Superheroes!
Posted by Scipio at 6:27 PM

Before Zero Hour, during the "five-year gap", Marzal was destroyed by the Dominator-infiltrated earthgov. Tyroc survived, and became the leader of the resistance movement. I'm not sure, but I think that he got to be Earth President after the revolution...

Tyroc's apparently back for one issue of the new LSH next month--at least he's on the cover, with Dawnstar and Blok! (And yeah, he's in his old costume, not the FYG "normal clothes Troy" incarnation.

Apparently, he disappeared back in the 70s because Paul Levitz hated him.

Well, I hope he brings Vibe back with him...

Why bring back a loser like Tyrok? They should bring back someone col like VIBE. (the r in bloody ,urder is still black instead of red.)

The real miracle of his power is how he kept lil' Tyroc (or, uh, probably not so little) from falling out of those bikini briefs he's got on.

And, oh, the shudders from the female (and probably a few of the male) Legionnaires when suddenly they were hit by a sudden rain shower. Wet t-shirt contest, nothin'! Wet Tyroc and Cosmic Boy costume contest is even better!

Tyroc should get together with King Adrock and throw down some beats.

My roommate walked by and saw Tyroc on the screen and wondered aloud "Who's the first homoerotic superhero?" If anyone can answer, I know it would be you, scipio. So?

For some reason I think it would be cool if Tyroc was a descendant of Black Manta's established undersea nation.

"Who's the first homoerotic superhero?"

Herakles, whom you'll recall left the Argonauts when his boyfriend, Hylas, was kidnapped by nymphs.

Who would win in a fight?

Tyroc or Angar the Screamer?

Ok, "Who's the first homoerotic superhero... in comics?"

I nominate Namor, who I believe first appeared in 1939 wearing nothing but a Speedo.

'Tyroc survived, and became the leader of the resistance movement. I'm not sure, but I think that he got to be Earth President after the revolution...'

Actually, that was the second Invisible Kid, Jacques Foccart. Tyroc pretty much fell off the radar completely, although I think he made a later appearance after Earth blew up.

Didn't Jacques quit, with Tyroc, the VP, getting the job?

Check out Legion of Super-Heroes #15, due out tomorrow. You're a man ahead of his time in regards to things of the past that involve the future.

What the hell a CIR or IRW sounds like I have no damn clue!