What decent American could argue against donating the Masters of Disaster to Marvel? 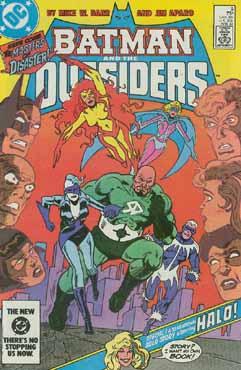 Let's see, can we struggle along without a team that was single-handedly defeated by Hooker the Girl Giftwrap? Just look at the Outsiders' faces; even that posse of misbegotten losers is clearly stupefied by the cheesiness of their opponents. Only the blissful Halo seems immune to mortification, enshrouded in the fog-like delusion that she's going to get her own book and violating the Fourth Wall Taboo. I suppose in order to be Halo in the first place you pretty much have to be immune to mortification.

New-Wave ("Wow, her name refers to powers AND her edge-hugging hipness; the kids will love her!") is yet another Zan-clone, whose principal accomplishment has been drowning Shakedown (hold back those tears, folks), which is a mercy-killing because anyone (other than Superman or Letterman) who has his initial(s) on his chest (as if when his mother sewed the costume she wanted to make certain he didn't confuse it with anyone else's in the supervillain's locker room) should clearly be put out of our misery.

New Wave's got "X-Factor" written all over her. Maybe, 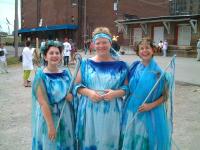 just maybe, if she could retain her cohesion in the sea, she'd make an okay one-time sparring partner for Aquaman, at least until he just sucked her up with his Mysticky Hand of Aquarius (tm), sending her off the Land of Liquid Fairies, who would, I'm sure, heal her tormented soul of its unquenched desires with the gentle licking of the lambent undulations of their blahbbity -blah -blah -blah (insert 12 issues of Rick Veitch here).

Windfall? Gee, another character who blows. Apparently, every one of these "Criminals of Crapola" teams has to have one member whoss power is being full of hot air (the Wind Elementals must have a strong union). Oh, but Windfall's special because she's torn between being a hero and being and villain, and she's New Wave's sister. Sisters with dissimilar elemental powers and internal disfunctional family strife? Vacillating between hero and villain due to moral uncertainty? Enjoy Marvel, ladies; go date the Summers Brothers.

And if you don't know the hideous Vertigoesque fate Grant Morrison doled out to Coldsnap & Heatstroke, who are Tragic Victims of Comic Book Irony (tm), in Aztek #7, then be happy I'm sparing you the details. What remains of them would feel at home among Marvel's Misunderstood Monsters, I'm sure.

The more I look at the "Masters of Disaster" the more I marvel that I didn't get around to donating them sooner. So many Misbegotten Creations of Enemy of Society Mike W. Barr, so little time...

My only problem is figuring out how MANY characters they count for (Shakedown = zero? "Heatsnap" = um, 2?); I'm calling it a non-fantastic four and moving on.
Posted by Scipio at 8:51 AM

Wasn't Coldsnap a member of the Brigade? Check him out and imagine the pointy helmet...

I vaguely remember the first time I ever encountered the Outsiders was some big-ass annual or special with Sapphire and Metamorpho's wedding, which of course was halted on the way by Sapphire being kidnapped by her father Simon. The Masters of Disaster were in that one, so I got the Outsiders and the Masters at the same time.

Coldsnap looked a lot like Cyclops, now that I think about it. With Iceman's powers. And dating an elemental redhead.

There was also some kind of power duplicating guy involved, and the image that sticks out in my mind the most - besides Black Lightning zapping New Wave into steam - is Metamorpho fighting the duplication guy; two men fighting, made entirely out of diamond. Can't remember the artist, I don't think it was Aparo.

I could be incredibly wrong but wasn't it Kevin Nowlan?