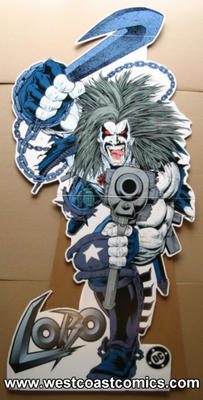 As a Lobo fan, I will concur with the sentiment that he doesn't really fit at DC.

If anyone ever screamed "I'm a 90s X-Men villain," it's Lobo. He never, ever worked that DC feeling.

At my comics store, the true test of a character's DC-ness is a guy named Howard. He's been shopping at the store I run for nearly 20 years. He collects everything coming from DC. If he rejects it, it is not worhty.

He does not buy Lobo.

Lobo is not worthy.

It wouldn't be so bad if he was just in a pocket universe or something, but they insist on having him interact with Captain Marvel, which sullies them both.

As unhappy as I am with Marvel these days, this Lobo is a loser I wouldn't even wish on them. Can't we donate him to a defunct company and trap him in limbo forever?

Wasn't he created by Giffen or someone similar as a parody? Possibly deliberately as a Marvel-style baddy, an even more loud and stupid souped-up space-riding Wolverine?

Well, Lobo was RE-created as a parody. He originally appeared in the Omega Man, but he wasn't so ... extreme.

He looks like a "Yellow Submarine" Blue Meanie who woke up on the wrong side of the bed.

Wait. How could people not get the point of Lobo? I mean, you'd have to have something just as ridiculous on the market, maybe some sort of guy with claws who basically just runs around killing stuff, but he begs to be taken seriously, just to even...

Wait, Lobo's a DC character? Man, am I out of touch.

Scip - you and Devon have got to post a list of everyone you're booting over to Marvel. I'm starting to lose track.

Couldn't you give him to Liefield? Liefield created a Lobo clone for Image called Bloodwulf (or something), he would want him...