A Heap of Mallow and Company 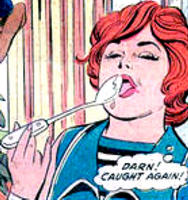 In honor of the glorious and generous Marionette, who has helped complete my life by presenting a biography of Marsha Mallow, I reprise my blog entry of April 19 on Fat Funny Friends..
High-Carb Companions, or, Where did all the fat people go?

One of our favorite toys here at the Absorbascon is the "Dynastic Centerpiece" model, that is, the idea that DC's iconic characters become iconic partly because a 'dynasty' of other characters with prescribed roles (e.g., "Kid Sidekick") are built around them. One option in the model used to be The Fat Friend.

Perhaps it would be more accurate to say "Funny Fat Friend", for these figures were almost always played for laughs. Batman had Alfred (yes, he was originally quite the tubbo and was strictly comic relief), Jonny Quick had Tubby Watts, Plastic Man had Woozy Winks, the Legion had Bouncing Boy, Green Lantern Alan Scott had Doiby Dickles, Wonder Woman had the (relentlessly fabulous and unrepentently

fat) Etta Candy. Even Lois Lane had a Funny Fat Friend, her roommate Marsha Mallow (who you'd think had to have been Silver Age, but, no, we're talking 1970s, folks!).

Where did they go? Alfred went to a fat farm (no, really ... he did), Tubby disappeared, Woozy has been covered up by DC in a desperate attempt at superheroic legitimacy for Plas, Bouncing Boy has yet to be seen in this week's Legion reboot, Doiby Dickles is living on a distant planet (it was a Young Justice story; anything could happen), and Etta, the worse victim of the anti-fat conspiracy, went on a diet, got married, AND disappeared (only to return last month in a WW cameo). Marsha Mallow? Not sure; I think, using the fortune she made on Ebay by selling her name to the highest-bidding drag queen, she hired a gigolo who digs Big Beautiful Women and moved to Santa Prisca to avoid taxes. I'm sure I saw her as a background figure in a "Question" story once....

Now, maybe the reason for their disappearance is simple. Maybe DC got rid of them because comic relief characters went out of style, or

because having Funny Fat Friends was too much like making fun of fat people, which isn't cool. That's all understandable.

But Funny Fat Friends served their purpose in the Dynastic Centerpiece model and I think we've lost something of value with its absence. Funny Fat Friends were pretty darned intrepid. Spunk is not reserved to those with Olympic-level musculatures, and the F3s made that clear. Woozy Winks, in his passive way, was almost as powerful as Plastic Man. Doiby Dickles was a serious scrapper, and Etta ... ! Woe betide any fool goosestepper who tried to take on Ms. Candy. Just for giggles, she'd beat the snot out of you, paddle you in front of her girlfriends, and make you sing "I'm Forever Blowing Bubbles", all while eating a box of chocolates. Woo-woo, indeed.

Funny Fat Friends (F3s) didn't suffer from "negative self-images." They respected the heroes without being slavishly in awe of them. They didn't question their own ability to contribute to any venture, despite being paired with people who could use their magic rings to overturn battleships. On the whole, they enjoyed their adventures, a luxury our stone-faced hero sometimes didn't have. Okay, so they weren't very funny by our standards. But they were fun!

Funny Fat Friends weren't funny on account of being fat but despite it.. Oh, sure, they would occasionally use their heft to their amusing advantage in a tussle, but no one thought lesser of them for it. In fact, they showed that Fat (and otherwise imperfect) people could still be quite cool. Hey... they hung out with the world's greatest heroes; how much cooler than that do you get? Etta Candy is 900 times cooler than Snapper Carr (heck, Marsha Mallow was cooler than Snapper Carr).

With the loss of the F3s, we lost from our stories their message: You don't have to be super or perfect to be confident, make a contribution, and have fun.
Posted by Scipio at 4:34 PM

That was a truly great post, but I have a few quibbles.

1. IIRC, Woozy Winks has been brought back in Kyle Baker's Plastic Man by now.

2. I'm almost certain that Doiby Dickles marrying a space princess was a Silver Age idea rather than a Peter David one.

Now THAT's funny, whether you're fat or not!

Sorry about that, though; but you've seen how much spam we've been hit with here, making it a sad necessity.

I thought I'd already posted this but I can't find it so I guess I just imagined it - I have a couple more pictures of Marsha that I didn't have room to use in my article, but you are welcome to them if you want them.

Oh, please do mail them to me; one cannot have too many pictures of Marsha Mallow!

It's worthy of mention that, in the Golden Age, when fat sidekicks were the height of super-hero trends, Wildcat bucked tradition by having an ultra-skinny sidekick, Stretch Skinner!

I think we've all forgotten one of the original Fat Funny Friends: ALFRED! Yes, when Batman's faithful butler first appeared, he was a portly porter! The skinny look came later.

Sure, I know that you wrote the F3 article months ago, but I'm just getting around to reading it.

There are still a few F3 out there.. even Post-Crisis.

Don't forget Flash's friend 'Chunk' who, get this, Flash met when Chunk was 'eating' diamonds.

For some reason I always end up back posting here on threads about fat people ( full disclosure: as my email address implies, I'm a bear and a bear lover, and that does make me somewhat of a chubby chaser, as well as a former chubby mylself ).
I have to second the pope's mention of the wonderful Chunk, and I wanted to bring up the Legion cartoon's maginificent re valorization ( Jonhsification, if you want ), of Mr Chuck Taine.

verification word:zudaxj. are you being sponsored by DC now? It's the least they could do for a fatifull acolyte such as you!