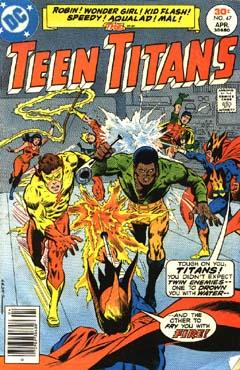 Our next set of Character Donations to Marvel come from frequent Absorbascommenter "Totaltoyz" who reminded us of them in his comments on Sinister Sidekicks:

"In the late 1970s revival of Teen Titans, that blip on the radar between the original series and the one with Starfire and Cyborg, Two-Face employed a gang of super-powered identical twins! Their names were Sizematic, Flamesplasher, and Darklight. (No, really. I'm serious). When the Titans first fought them, they had the powers of growing to giant size, projecting flames, and creating darkness, respectively. When next the Titans met the villains they thought they were ready for them, but were caught off-guard when the villains used the powers of shrinking, projecting water, and creating blinding light! Then they learned that there were two sets of villains, and their boss was none other than Two-Face, the father of one of their own members (and the less said about that, the better!)."

Did Totaltoyz make this up craziness? Oh, no; only Bob Rozakis could do that. While I don't like much of Bob's work, Wacky Rozakis gets some serious points from me on two accounts. (1) He clearly doesn't take comic books too seriously. (2) He's the only person other than I who would write the phrase "each wearing thematically appropriate pointy tiaras". You go, Bob.

NEVERTHELESS. The compound-noun names? Twins with the unlikely but conveniently complementary powers? That pretty much spells out "Marvel mutant villains". So these six villians with only three names among them get sent to the Marvel Universe where they will make a fine little group, Double Trouble, probably motivated by society's unreasonable persecution of twins.
Posted by Scipio at 9:31 AM

Nope, sorry Scipio. I will write off your donation of Kirby's Fourth World as a personal quirk. (And because I think they work best as an internally consistant mythos, rather than a vestigial appendage to the DCU that merely embarasses, like a third nipple. The Fourth World should always be the first nipple.) Any many of your choices so far have been very "Marvel-esque", such as these things go.

But when the focused totality of your ire became fixed on the Demolition Team, I began to wonder if the donations were becoming an ends unto themselves. And now I am sure of it. Groups of thematically linked villains who have been chosen by a master villain, not as mere catspaws, but because they fit the villains thematic identity? How much more DC can you get? Donating Flamesplasher et al would be like giving away The Royal Flush Gang - and throwing in the Joker to boot!

So no, Two-Face's Two Teams of Terrible Twin Terrors (like anyone but the Bat-Narrator can get away with that!) simply must stay in the DCU. What's the procedure for re-donation? Do we readers need to have a two-thirds majority to over-ride your veto? (Harvey Dent's favorite aspect of politics, after the bicambrial house and two-party system.)