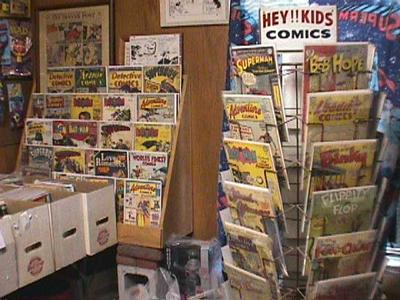 If you suddenly owned the store where you get your comics ...

This isn't by any chance related to this:

I suspect not, but it's a nice coincidence. I just wish I had the balls to go ahead with it. As for answering your questions, to paraphrase Fermat "The answers are too long for this comment box"!

Nope; wrong country. If I had someone on the ground there, I'd buy it; sounds like a great deal.

If have that many thoughts, bat-mac, then PLEASE send me a personal email.

Whew, big question. I'll have to do this later. I'll be back.

I'm anxious to hear all your ideas, and with good reason....

There are two comic stores in East Lansing (and some more in Actual Lansing, but I don't usually shop there). I go to both, but the one that is my historical preference went through a bunch of crap with changes in ownership. They got rid of their subscriber discount and started carrying all this movie prop replica crap. (Some of which has sold, some of which has definitely not. Nobody wants Hellboy prop replicas in this town.) If I could own it and afford to, I would reinstate the subscriber discount. I would also actually do inventory. Because they don't have enough staff or time to do that anymore. Ordering is on a "you guys are out of these, I want some" basis. I still like the store and the people who work there, but I'm afraid it's going to go bust. (Which happened to a store in Ann Arbor that got bought by the same people.)

This is an interesting question and I will continue to think about it.

I agree with franny -- there's a distressing tendency among store owners to get rid of discounts to subcribers.

The thinking behind this decision, I suppose, follows thus: "A discount motivates only cheap customers, not customers who spend real money. Thus, good riddance to any customer who doesn't value the other aspects of my wonderful store enough to pay full price."

To such store owners I say: you're missing the point -- and overestimating your appeal. The discount isn't WHY I come to your store. It's why, when I leave your store, having spent my weekly money, and done some extra shopping, I feel good about having gone to your store. It's a TANGIBLE thing I can point to -- that I can see on the receipt -- that says, we both benefitted a bit.

However charming your conversation, however brightly colored your gewgaws, howevermuch the music you play appeals to me, at the end of the day, that tiny percentage off REAFFIRMS my decision for your store to be my exclusive source of a product that it identical to product carried at other stores.

It's important, and it's good business.

Relegate the Pokemon and Yugi-Oh cards somewhere far far away from the comics. Preferably another state. Or, if you are going to sell those things, try and get the kids into buying comics, too.

If the shop is in the DC area not sale it to Phoenix Comics which has bought almost every comic book shops in Northern Virgina. Here is the list of what we have left in Northern Virginia: NOVA comics in Springfield (owned by the left overs from BC Comics, the ones Phoenix fired because they had no clue about comics. They do a lot of board gaming too.)
Another Planet in Veinna which does not do back issue (I subscribe with them, Jared is fairly good to deal with),
EG Comics in Veinna ( Best place for back issues in NOVA, owner is kind burned out and may soon sell.),
Outpost in Veinna ( Owner kinda does comics but is mostly a gaming shop ), Hole in the Wall in Falls Church ( Used Book store that has a few boxes of comics. Calling it a comic book shop is a strech),
Painted Visions in Woodbridge ( Gaming store with a few comics. Again not really a comic book store)
Anime Pavilion in Falls Church ( Does it even have American Comics anymore? Mostly an Anime shop. )
A small shop somewhere in Alexindra or Arlington area (never been there heard it was real small and may no longer exist. Shops in that area have a tendency to go under. )
Two Anime stores in the Springfield Mall ( They are Anime only with a few Managa on the side )
Starland Video Games in Annadale ( Video games with a little Anime )
Anime Shack in Chantilly ( Again Anime with a little Managa on the side ).
Game Palour in Chantilly ( Does sell comic books but not very well. It is a gaming store. )
The Lucky Frog in Annadale ( Gaming store that has a few gaming comic books left over from when the owner tried to sell comic books at the Lucky Frog 2 in Alexiandar. LF2 became BC Comics 4 which then became another shop which went under and is now something other then comics.)
Ron's Collectors World in Annadale ( Card, Gaming and Comic shop. Not really that good, I live about 10 minutes from it and have not set foot in it in 5 years. If you are there ask the owner about his appearance on Fox News. )
BC Comics in Fairfax ( owned by Phoneix comics now. BC has a long history in the NOVA area for crapping all over comic book people. )
Phoneix Comics in Herndon ( the empire that controls 90% of the comic book market in the NOVA area. Look for them to buy out Nova Comics and EG Comics sometime in the future. They may also buy out Another Planet or drive it out of business. )
I think that is it but I am sure I missed a few. Particularly the gaming and Anime shops. As you can see in the NOVA area there is only a few true comic shops. Also before you go that is a lot, NOVA is home to a million plus people with several colleges and miltary bases in the area. There should be five times the amount on the list (and there was until Phoneix bought them all out).
Still you would have do a lot of work to get us NOVA boys to travel north to DC or Maryland. I know there is about 10-20 hardcore Hero Clix guys (at least when I judged at the Frog I got 5 on a normal tournament and 10-20 for the special tournies. I think Scipo you came to one of my tournies at the Frog.)
Not sure if there is anymore Hero Clix tournies in the NOVA area and those guys if they have not already would make the journey into DC. For me a strong stack of cheap comics from the Bronze age (70s,80s, and 90s) would draw me to your shop. A place to park would also help.

Nope, never been to the Frog!

I'm curious about your Heroclixing friends. One of things we plan to do is off custom clix of unmade characters, using appropriate dials from other characters.

Would that interest your friends, and, if so, which characters would most excite them and what would they expect to pay?

I sold all my Heroclixs a year ago but I think a couple of them would. When I was playing I would have loved a set of the All Star Squadron and one of my players was trying to get a custom set of TMNT figs.

I forgot to add I am not sure what they would pay. They where all fairly successful (which is very rare for gamers) and could afford to spend 5 or 10 bucks a fig but personally I would not spend more then 5 bucks for a custom fig. The only fig request I ever heard was Teenage Mutant Ninja Turtles but that was one guy. The TMNT crowd is starting to come of age however and in about a year start looking for TMNT stuff. I would still be careful with toys. I have seen a few shops make a fortune on old toys but I have seen more stuck with racks upon racks of toys.

Huge question...I'll email you a response to your personal mail, Scip.

Scipio, did you receive my email? I got one message that said that it bounced it back. (Sorry I sent it twice, argh).

If I were to own my local store I would do these things.

1) Buy a sign.
My local comic store is in a high traffic area and has a large amount of space. Unfortunately, from the main street that runs past it, you can’t see the store because it’s obscured by a gas station put in by the grocery store that’s a few stores down. My LCS desperately needs a sign near the street that let’s people know it’s there.

2) Institute a dress code among the employees
I work in a professional environment, so I’m used to wearing a shirt and tie every day. And I don’t care what anyone says, casual wear simply does not look good in a retail store. I don’t think that the employees need to wear dress clothes but I would probably order up a bunch of polo/golf shirts with the store logo on it for the employees to wear. This would make the store feel more like business and less like a bunch of people hanging around. It would also make it easier for new customers to identify who they can talk to if they have questions. Currently all of the employees basically dress like the customers so a new person would never know.

3) Cut down on clutter/revamp the layout
My LCS has a great space to work with. Unfortunately it’s organized very badly. It’s obvious the current owner doesn’t understand the need for flow in a retail store. As someone who’s worked in upper management for retail stores, I can never stress the importance of laying out the store appropriately. People not in retail would be amazed at how much planning goes into deciding where every single item for sale is placed.

Ditto on the dress code. I've been in a store where I walked in and the owner was chain smoking, eating Chinese food and wearing what looked like his DYI project clothes. Mmm, mmm, them's good eatins.

However that same store also has customer appreciation wine and cheese parties once a month, which I have to admit is pretty nice.