There's a Marvel character I want to be donated to DC!

No, no, not the hero; his uncle, the villain! Prof. Nathan Garrett was his name. Developed high-tech weapons designed to look like medieval ones, for example, a laser lance. He also used advanced genetic splicing 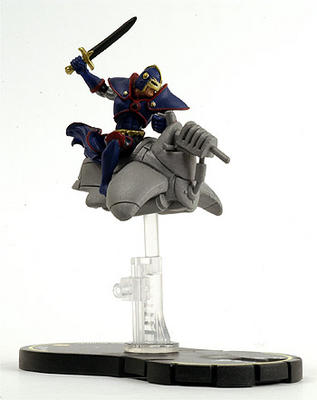 techniques to create a winged horse to ride. Why do such things, instead of using his vast scientific acumen to make millions? Because it was COOL. Because he COULD. Because he was so brilliant he was STUPID.

He's got "DC" written all over him.

I can picture him now, fighting Hawkman, Wonder Woman, the Shining Knight. Teaming up with TerraMan or the awesome Human Flying Fish.

He could be Green Arrow's archenemy!

I suppose not, for some.

It;s this guy just Terra Man in a different costume?

Actually, Rampage is She-Hulk's DC equivalent. I don't lover HER, though.

Actually, Black Knight would make a themetically good villain for Ollie. It's Robin Hood vs. the robotic Sherrif of Nottingham. Add in a twist...Ollie's a rich playboy, Black Knight's a penniless but brilliant inventor and European History professor...bam. Instant awesomeness.

Add in a Sinister Sidekick named Squire and an army of robotic knights (who would, of course, outrank the human Squire), and you're golden.