Ah, the Nameless Underling; another of the Rungs of Villainy! To the untrained eye, Nameless Underlings can look like Faceless Fodder, but connossieurs of criminal subtypes know better. There are so many differences!

Fodder are treated collectively, as a group. Underlings are invididuals; nameless ones, but individuals nonetheless.

Fodder do not talk, except to make a lame pun during a fight or pe 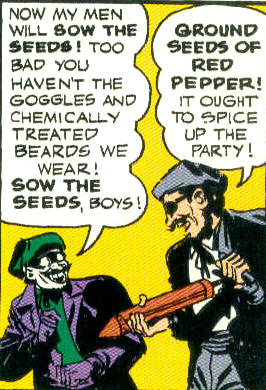 rhaps emit a "YI-I-I-I-I-I!" as they cascade over a balconey bannister. Underlings are superior because they hold the RAE, the Right of Ancillary Exposition (Ha! Schwartz couldn't weasel his way out of that clause!). Underlings may engage in Q&A with their villainous bosses or chime in with Colorful Clarifying Commentary (CCC), so long as what they say further explains the action or plot.

In the panel at right, the Nameless Underling we shall designate as "Artsy-Face" exercises the Right of Ancillary Exposition by clarifying what kinds of seeds the Joker is talking about, followed by some CCC, a not-hopelessly-lame elaborative pun. Cheezy Underlings often append their CCC with an Emphatic Ejaculation (e.g., "Haw!", "Yeah!", "Huh!"), but not Artsy-Face; he's got class.

Though it's not common knowledge outside union legal circles, the RAE is not, in fact, part of the Underlings' contact; it's in the Villains' contract.

You see, villains don't really need someone to talk to. They can always just talk out loud. To themselves. Loudly. Waving their arms in the air. In a disproportionately large room drawn slightly off square and whose furniture to just a tad too far apart, where the full moon is visible through a multi-paned picture window. You know ... like they do. 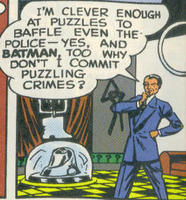 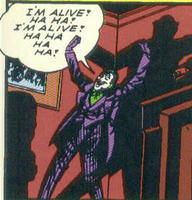 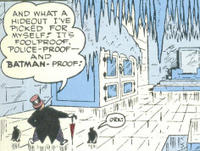 See?
Happy as clams, each of them, chatting away merrily, admiring themselves and their decor. Why, the Joker seems impressed simply with his own existence, as if just being alive were his greatest accomplishment. Very zen, the Joker.
But villains hate having to hammer home every little detail of their heists to hoi polloi; it's beneath them, dilutes their impact, and wastes their oratorical talents. If stupid people like you and I don't already get the joke, villains certainly aren't going to stop to explain it to us. Thus, the villains put it in their own contract that the Nameless Underlings retain the RAE. Would you want to argue the point with the Joker or Two-Face? Neither do DC's lawyers!

Nameless Underlings are also allowed to pose a legitmate threat to the hero (and the ability to state that falls under the RAE). Below, Artsy-Face gets carried away with his own CCC, and by announcing his threat to Batman ensures a clobbering by Robin accompanied by a pun so bad I had to crop it out, to protect any women or children who might be reading this blog.

Oh, too bad; Artsy-Face showed such promise. Given a second appearance, he might have gotten a two-panel confrontation with Batgirl in a Batman Family backup story, followed by an appearance in a annual crossover, and wound up as a top-notch Green Arrow villain.

It's a rough business, crime is. But, as the Joker's exiting comment reminds us,
"Only FOOLS work for ... the Joker!"
Posted by Scipio at 7:23 PM


BTW, "and wound up as a top-notch Green Arrow Villian"...

"You've got some hot air too!"

The Underling obliges by going "HHFFFT!"; Artsy-Face was a real trooper, he was.

you really should pitch a miniseries based on these astonishing insights to somebody. someone should give you the gig on the strength of this website alone.

except the rights to the pictures poses an insuperable obstacle.

I love how the penguin (animal) goes "ORK" when the Penguin (person) talks to himself!!!