Rungs of Villainy: the Crime Groupie 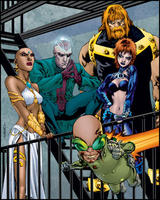 Let's see; so far on the Rungs of Villainy, we've looked at the Innocent Dupe, the Blackmailed Accomplice, the Faceless Fodder, the Nameless Underlings, the Unwitting Patsy, the Denominated Henchman, Sinister Sidekicks, and the Forgettable Moll.

Beyond all these is
the Crime Groupie.

The Crime Groupie is part of a tight gang with other costumed crooks, usually with a complementary mix of powers. You can recognize the archtypes a mile away, like a tarot spread of the Un-Major Arcana of Powertypes: The Empath, The Ninja, The Goliath, The Magician, The Mentalist, The Blaster, The Transformer, The Teleporter, The Shadowcaster, The Gunster, The Gadgetmaster, The Succubus, etc.

Crime Groupies are a study in the utility of diversity. Their diverse set of powers give them an advantage in a fight, but their group identity generally blocks the members from advancing to successful solo ventures. Crime Groupies are the comic book criminals' equivalent of boy-bands; occasionally, a member will attempt a solo career, but it seldom succeeds.

If you'll look back at some of our Character Donations, you'll notice that some of them are Crime Groupies. Standards for being a Crime Groupie are rather lower than those for stand-alone villains, don't you know. Remember Maxie Zeus's "Olympians"? If you do, try to forget them, as I did (therapy IS expensive!); if you don't, DON'T ASK. Shudder.

Which brings up another feature of Crime Groupies. They are very often introduced as tools of a real villain, who's outsourcing some villainous task. Amos Fortune, Cong. Bloch, Dr. Light -- guys like that hire or create a group to go attack somebody: "Destroy Ferris Aircraft!"; "Crush the Teen Titans!!", "Bring me the head of Joe Quesada on a platter!".

Later on, some deluded writer, wanting to make his mark, mistakes what is essentially a bunch of Free-Range Sidekicks for a real Villainous Supergroup (you know, like the Fatal Five or the Keystone Rogues), much to everyone's embarrassment. So the writer puts two of them in a romantic relationship, give one pangs of conscience about a criminal career, makes another slightly crazy, and give one a secret agenda or a vendetta; they call this "characterization". We call it "unpleasant". Previews calls it "The Secret Six." 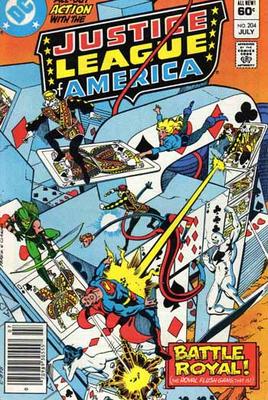 The most distinguished Crime Groupies are, it almost goes without saying, the glorious Royal Flush Gang. We, they, and the writers have accepted them for what they are: an Unavoidable Concept.

No one cares who they are (since they are composed of a different set of people in almost each appearance),what their powers of the day are (they'll explain them, out loud, in battle when they use them), or what their motivations might be. They simply are. They must be.

As a nameless new member notes in a recent issue of Villains United, the idea of a poker hand come to life, whizzing around on flying playing cards is intrinsically cool. The rest is details.

In abandoning all pretense of being anything other than a collection of interchangeable Crime Groupies, the RFG has become the greatest group of Crime Groupies ever. In embracing humbleness, the Royal Flush Gang has achieved greatness.

The JLA issue pictured is one of the first JLA comics I ever bought - it took me years before I could find the rest of the storyline. The Royals have always been one of my favourite villainous combinations...

I quite liked them in the "JSA All-Stars" mini a while back, in the Stargirl/Starman spotlight issue - I remember Stars and STRIPE running into them looking for Courtney's father, and her dad turning out to be a member of the Gang - and he was a Two, as I recall. Courtney was appalled that he wasn't even a Ten. Actually, that particular issue in general was great, with a cool Robinson Ted Knight story as a back-up. But the Flushes appearing was awesome.

You also forgot to mention that it's almost going without saying that every single time the RFG shows up, they have some random giant robot as the Ace.

Courtney's dad is a crook?

For the life of me, I'm having a hell of a time thinking of Crime Groupies. The Female Furies is the only one that's coming to mind at the moment. Um, the Nuclear Family? Although that's a Barr creation, so I don't know if they count.
Who else?

Of course you don't remember them! That, tee hee, is part of the point...

Those are off the top of my head. If you open up the DC Encyclopedia, they drip from its pages.

And, of course, the phenomenon has its crimeFIGHTING counterparts.

Yeah, Courtney's real dad has shown up twice. Once in Stars and S.T.R.I.P.E to get her to give him one half of a matched locket set (and he then left immediately and presumably hocked the set), and then in the mentioned JSA All Stars.

At the end, Courtney left him in jail, asking him to never call her "his daughter" again. (After he basically said that she was that same as him, a nobody who is just joining up with other people)

Ooo, I loved the Brotherhood of Dada! I wish Grant Morrison would resurrect them in some fashion. Ah Mr. Nobody sing it again, "Art for Breakfast, Art for Tea, Woo Hoo!"

You gotta love a group whose villanous intent was to bring more art to the world through a hallucinigenic bus. Oh and to eat Paris.

My favorite members were Quiz and the Love Glove. So cool!
Only GM could make even Crime Groupies memorable individually...and yet, they're still even better together!

Ah, the crime fighting counterparts: well, pretty much any of the X-men, minus Wolverine. Power Company. Teen Titans minus Robin/Nightwing, and I guess minus Donna if the rumours are true. The Giffen Justice League. The Detroit Justice League. The Thunderbolts. The Green Lantern Corps minus Hal. The Fantastic Four.

Do the Green Lanterns count? They aren't designed to work as a team, but to each operate individually; one of the few positive points of Alan Davis's "Another Nail" (ugh - what a mess) was that he actually dealt with that a little bit.

Gatecrasher's Technet (or Nightcrawler's Technet) are crime groupies. The Birds of Prey are a good example of a well-done heroic version. The Injustice Society led by Johnny Sorrow; part of it was that they were each paired off with a hero, which means they all have a "role."

I still think it would be great to get Courtney her own solo book again, as Stargirl. Maybe with Jakeem Thunder as supporting cast.

I like the RFG as they appear in the Justice League TV show. I have a notion they showed up in Batman Beyond too, or I could just be getting confused.

"Previews calls it "The Secret Six."

Of course, before the Brotherhood of Evil Mutants recruited the Blob and setting aside that the founder is Magneto, that original team is composed entirely of Crime Groupies.

Actually the members of the Fatal Five are all described as quite capable in their own right before the group assembled, and when fighting individually they have been rightly portrayed as quite deadly.

The LSV rarely appeared fighting the LSH; they show up as villainous mirror counterparts (and often in adult form) to fight a protagonist related to the Legion, such as Superman. Later then a teenaged Lightning Lord proved to be a capable solo villain counterpart to his brother Lightning Lad.

The so-called "Keystones Rogues" aka the Flash's Rogues Gallery is not a selection of Crime Groupies because the majority of them have proved themselves to be either threats or annoyances to the Flash. They are all pre-established Flash villains who decided to team up and gang up on Flash. They're similar to Spider-Man's Sinister Six.

The problem with the Sinister Six came when the writers stopped respecting the individual characters and then portrayed them as weak freak and turned them into Crime Groupies, almost.

After a Spider-Man (be him clone or otherwise) pounded the crap out of four or five Sinister Six members at once without much trouble, while on his own, in more than one encounter we see how little respect that editorial office had for its own best characters.

There is a lower sub-group of Crime Groupies: the Disposable Crime Groupies. They may be unique to Marvel, which would explain why you missed them. Usually a group of seven, they are called out of thin air (sometimes literally) by the primary villain to get trounced by the super-heroes while he goes about more important business. They have no backgrounds, no personalities, no motivation, only powers and character designs.

Some examples that come to mind are the Master's Omega Flight who fought Alpha Flight, Salem's Seven who fought the Fantastic Four and the Secret Empire's Brute Force who fought the Thunderbolts.

Do they deserve their own ranking, do you think? I certainly wouldn't put them on a level with the Royal Flush Gang.

Do Omega Flight count? Like the Royal Flush Gang, they're more like a villainous franchise, and usually members were culled from the "heroes gone bad" ex-members of Beta and Gamma Flight.

I don't know about the Master's Omega Flight, but the original Omega Flight vexed Alpha Flight is much the same way that the Brotherhood of Evil Mutants opposed the X-Men.

Also, that subgroup of Crime Groupie has to include the various villain-teams that Taskmaster trains to throw at heroes when he or the Red Skull don't want to fight them.

I hate the Salem Seven. Who thought it would be good drama to have four good guys fight seven bad guys when the bad guys are unattractive visually, bland at best, not very interesting as characters, and are in and of themselves each a tad more formidable than one of the Fantastic Four.