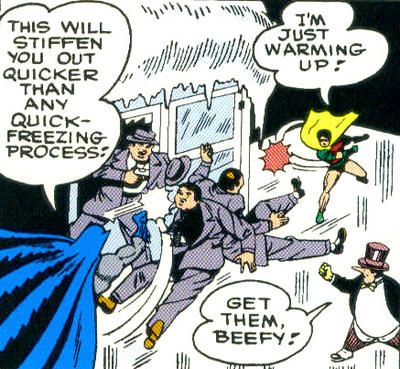 If you've survived so far along the Rungs of Villainy, you may be a

You're a real player now! "The Boss" knows your name and uses it in front of other people ... in front of "The Enemy". And the Boss doesn't run away when you shove your face in the meatgrinder of justice, because he's confident you're going to win!

Boy, wait'll the guys at the Dark Side Bar & Grill here about this!

"So it's just me and the other guys in lilac suits, see? We run forward on the ice in our brown patent leathers and the Penguin says to me, "Get them, Beefy!" I'm not ashamed to tell ya, I cried; made it hard to even see who was knocking me out. At the police station, I used my one call to let my mother know I'd become a Denominated Henchman; she cried, too! I can't wait to tell everyone at my reform school reunion, in 10 to 20 with time off for good behavior." 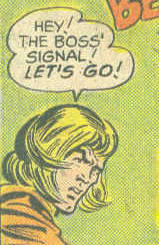 Southpaw had two second bananas, Tooth (the black guy) and Blue-Eyes (the guido, who, sadly, had an unfortunate accident involving "the Boss" and an oncoming truck). Together they were the Shadrack, Mischach, and Abendigo of the gooniverse. Tooth and Blue-Eyes are (um, "were" in Blue-Eyes' case) respected Denominated Henchman, but Southpaw? Dude's the highest ranking of DHs, a Left-Hand Man.

And no wonder! He's resilient (most characters can't survive more than a couple panels with the Joker), adapative (whatever Mr. J's wacky plan, Southpaw was ready to go), obviously highly intelligent (the Joker barely respects anyone with a less than Luthor-like IQ),and talk about STYLING! Wild, 1970s-style, blond action hair, manly cleft chin, the arched eyebrow that is the universal comic book symbol of superior comprehension, a white turtle neck with an orange leisure suit! Denominated Henchman don't come any cooler than Southpaw, kids.

Gee, they've spammed about just about everything but "florinated water kills".

Anyway, would "superpowered sorts who work as minions" go here, or are they in another group? I'm thinking of things like Apocalypse's Four Horsemen, or Mr. Sinister's Nasty Boys

Biggest "on screen" time I can remember recently for henchmen was in the early Days of Harley Quinn. Of course before she got her own comic she probably qualified as a hench-person herself.

But after she went solo she had 5 henchmen all her own and they all got speaking parts and lasted for half a dozen issues or so. It was really quite touching in a psychopathic way when Harley murdered her most loyal henchman Lewis. He even got to return briefly when Harley visited Hell.

See? Harley still remembers being one of the little people!

Actually Harley and the others mentioned belong to another group ...

the next rung, in fact!

Joker from B:TAS still had denominated henchmen in Bud and Lou and later in Moe, Lar and Cur.

It must be one of the advantages of writing the character in that you take any comedy group and can turn them into hechmen.

Quite so, David, that's the spirit!

But I thought Bud and Lou were the names of the hyenas...?

I guess Joker liked his original cronies so much he named his pets after them.

I hadda dig this up, since I was working on Rhino, Scarface's main thug. Makes me sad to think of him: he wasn't snuffed with his boss, was he?

Thanks so much for the article, quite useful material.
nerd glasses | how to make a rosary bracelet | preferred stocks list | criminal defense attorney kansas city mo | ldl cholesterol levels

This will not have effect in reality, that is what I believe.
download racing games | game news sites | computer games information | play action games | flash game license