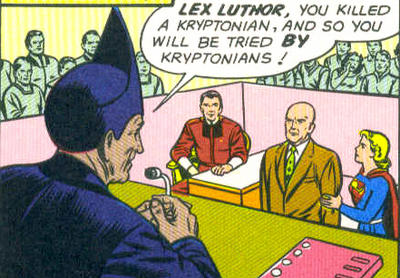 You know most people (other than Kryptonianologists) aren't aware that in the Classical Kryptonian court system, sentencing had to be done in haiku.

Now, Kryptonese doesn't translate perfectly into English, which, I think, is why this judge's phrasing is a tad off. It actually sounds more like this:

Lex Luthor, you killed
a Kryptonian, and so
you'll be tried by them.

Kryptonian culture was so painfully cool. Even loudmouth Luthor is stunned into respectful silence by the judge's casual use of haiku to damn him to transmolecular nullification.

And just for fun, let's have our own haiku composition contest:

What, in haiku, is that whispering woman in the gallery saying to her companion?
Posted by Scipio at 5:44 AM

A hat like that
would make me whole and complete.
It is quite pointy.

A bald earthman here?
Look at his blinding green tie!
Burns like kryptonite.

Look at her life's lie
Counterfeiting his colors
I wish I were her.

Now, as we discussed:
Remember to plead guilty
Or I'll crush your arm.

our fortunes are as good as MADE!

Earthling stands stiffly.
Up above judge fails to see
His pants are missing

I just HATE it when I can't get my Zod off!

Give the high quality of these absorbascomments, I think we're going to have to make Haiku Tuesday a regular feature of this blog!

I can see myself
in the back of Luthor's head.
Do I look that fat?

hey mine never showed up earlier. unless they were just too bad and scip deleted them. Let's see if I can remember.

Dal Al, I hunger
Will they serve snacks later? Or
is there a machine?

He wears a smug grin
Red-clad, a secret hiding
Hand in pocket: glee

You don't think Kara
Zor-El is more attractive
Than me, right, honey?

I second the Haiku tuesday idea. I used to do Heroclix Haiku at CreationMatrix.com and The Halls of Hysteria.

What namely you are writing is a horrible mistake.
Dartmouth | Huntsville real estate | styrofoam recycling