There are some topics so resonant with comic book lovers, so mytho-structurally significant, so controversial, that I been holding back from addressing them, fearful that my contribution would be of insufficient value.

But there comes a point where such fears and insecurities must be cast aside, in the hope that passion will prevail if intellect stumbles. And so, at long last, I approach the topic of:

"Which of us is the highest? I'm dying to know!"

That's our Lydda! Mordru may menace, the Time Trapper threaten, and Roxxas rampage, but Night Girl's only thought is, "Is there anyone with a higher bouffante than mine?"

The public story is, Night Girl's got superpowers but only when the lights are out. I guess that's like being superpowerless except from the waist down. Pity she couldn't date Hal Jordan, but in her time all that's left of him is a small plaque (where H.E.A.T. meets weekly) on the site of the bordello where he passed away at age 63 from a heart attack while atop a 20 year old Asian girl in a plasticene Star Sapphire costume. But I digress.

The real truth is, Night Girl's power is her gravity-defying 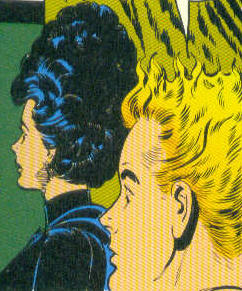 hair. Gargantuan. Monumental. Brodignabian. Night Girl could only exist in the 30th Century because it will take that long for human society to develop words to describe her hair, let alone the X-Serum-based transmolecular superstablizing salon-quality hair-care products to make it possible.

Look at poor Fire Lad, the flaming little poseur. "I've tried and tried," Hot Lips thought, "but even with my own 'club-kid' hair gelled up and spikified half way to Durla and back, I still don't get any attention as long as that pumped up prom queen and her grotesque hair hillock have all the boys staring at her! Oh, why don't boys love ME instead of her! *Choke*"

Think about it, Fire Lad! What idiot wants to go to bed with a guy who shoots FLAMES from his mouth? It's rather limiting, you know. Settle down with some nice invulnerable type; heck, Ultra Boy's game for anything, wink wink. 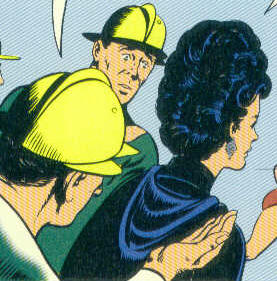 Regular citizens have no idea what to make of Night Girl's hair. Although they live in a world of miracles like the Potential-Factors Re-Organizer Complex and the Planetary Chance Machine, they are utterly mystified by the Superbouffante of Night Girl.

Of course, these are just rubes from the Rimworld of Va-va-va-voom (hey...I think I rented that movie...!). 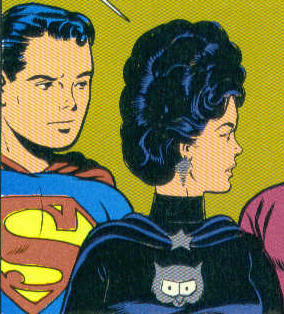 "It defies analysis by my wide array of vision powers! It seems impervious to heat vision, Star Boy's mass-inducing power .... even the unfathomable energies of the Emerald Eye! I'm positive I saw it take a direct hit from Validus last week, and yet... nothing! It's some sort of ... super-hair! Is it more power than *gulp* m-mine? Gosh, I sure hope not! That would mean that tomorrow at sunrise, I'd have to shove my hand through her thorax and crush her heart till it fused into a diamond. I hope it never comes to that...!"

All the while, Lydda's owl-insignia smirks, knowingly, silently wise about the dark tonsorial powers of its mistress. At least, until an invulnerable fist wearing a Smallville High ring smashes through it at light-speed....

That's an owl? For a moment I thought that Sanrio was still around in the 30th Century and Night Girl was carrying a Hello Kitty plush character in her cleavage.

Well, why not? For years Power Girl has been carrying twin Elmer Fudds in hers, or at least it appears so...

This is one of the funniest things I've ever read...and I know funny!

I learned something today.

Andy Runton's "Owly" was inspired by the Legion's Night Girl. Her emblem is a dead ringer.

Super-villains have krazy big hair too, y'know. Not Night Girl big, but big.

Glad to hear it. Any requests?

Part of my affinity for the Magus comes from our similarities. I too am a mad god worshipped by a huge cult that seeks to conquer the world, and I too have a wicked 'fro.

I need those KISS boots he has.

Why didn't instead of fading into large-haired obscurity, Night Girl just make some Blackout Bombs with 30th century "Super Chemicals"?