Phantom Lady Turns Out the Lights

Is there anyone more fabulous than Phantom Lady? Frankly ... no.

Like all really sexy Golden Age characters she comes (tee hee!) originally from Quality Comics (Police Comics #1, 1941). She got bounced around a bit (giggle!) between companies in the 1940s, and when Victor Fox of Fox Features got his hands on her (snicker), his artists gave her THIS, um, "costume": 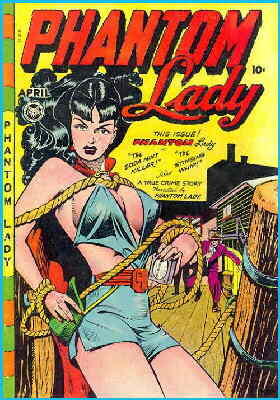 Homina, homina! Er, I mean, I appreciate the underlying theme of women's liberation symbolized by emancipating herself from the ropes clinging to her taut, heaving, and apparently excited costume. You want to see more, of course, but she's palming her blacklight ray, and you're seconds away from being alone with her in the dark. Well, except for the goons in the background. Hey, a girl's got needs.

Sadly, Dr. Frederic Wertham, author of Seduction of the Innocent, was so filthy-minded that he, like the victims of Phantom Lady's blacklight ray, was blinded to her glorious symbolism. This cover was reproduced in SOTI, Exhibit "A" in the Senate hearing that crushed comics in the 1950s, and Phantom Lady came to symbolize the naughtiness of comics that almost destroyed them.

Decades later, DC embraced her (snort) by making her scantily-cladedness part of how she distracts criminals, and having known pornographer Chuck Austen do her (snicker) really drove it home. Interestingly, retconning her as Ted Knight's cousin made her part of the Starman Dynasty, where she serves (served?) more or less as the "Female Counterpart", with a twist; Starman brings light to the night, but Phantom Lady brings dark to the day.

I'm hoping that, after the upcoming spanking (titter!) that the Freedom Fighters are going to get from the Secret Society, she and Damage will join the JSA, continuing the legacies of the Golden Age Starman and the Atom.

Anyway, now that I have a Golden Age Starman clix to fight alongside hipster Jack and teen queen Courtney, I finally felt what so many other guys have felt since 1941: 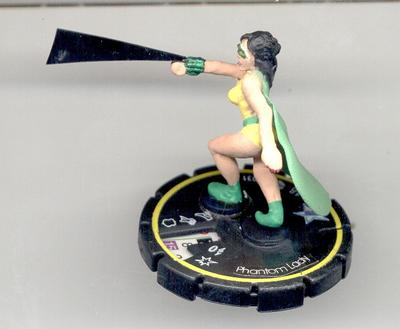 For about a year my living room was dominated by a shelf where my wife and I kept all our toys. Among the Barbies, the robots, the superheroes and the wrestling figures, my mother in law would could find the Phantom Lady in the pile and sneer at it every time. That's a classic costume.

Sorry Scip...my gut feeling is that all of them are going to join Blue Beetle and Max Lord in the Big Bwahaha in the sky....

ALL of them? Surely not!

I'm not even sure it's POSSIBLE to kill Uncle Sam.

Sorry, drifted off for a moment there.
Anyway, I really don't think they'll be killing them off. I mean, c'mon! They cameo in JSA sometimes, and they're pretty cool there!
They can kill off the Seven Shadows if they want to do that. I think all their stories were told in More Shadow Comics by 1947 anyway.

Is this another Totaltoyz creation?
What do his custom (requested, not eBay) jobs run?