I don't think it's general knowledge yet, but the people behind JLU and the Toon Titans are coming out with a Legion of SuperHeroes cartoon, whose animation style will 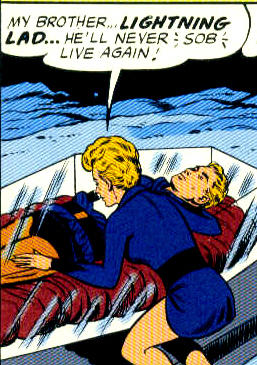 split the difference between the other two series.

'Bout time! The Legion is a natural for younger audiences, and I'm assuming it'll be pitched at the age group between watchers of TT and watchers of JLU. With Krypto, TT, The Batman, LHS, and JLU, the DC toon roster will have something for children of all ages.

Weird as this may sound coming from me, I think the Legion is, well, quite Marvel-like. Or perhaps it's more accurate to say that Marvel, at least its X-Men line, is Legion-like? In either case, in the comic books "teen angst" is definitely a 30th Century export product. The choking, sobbing, gasping, and sighing in your average Silver Age Legion tale left you breathless! The betrayals, the crushes, the rivalries, the deaths--lordie, it's like watching "Smallville" but with more than 8 people in the cast.

It was, pun intended, a series ahead of its time. Its essential message was one of strength through the unity of diverse people. It also taught gender equality at a time it was less than fashionable!

So I ask you, who do you think should be in the Legion series and what do you want it to be like?

Lots of teen romance and humor a la Rumiko Takahashi! That's what it needs. I've always thought she would do a great Legion.

Matter Eater Lad should play the same comic relief role Flash used to play in JLU until the most recent episodes.

I'd start with the 'classic' cast from about the time Levitz started writing the first time: Saturn Girl, Lightning Lad, Cosmic Boy, Phantom Girl, Light Lass, Ferro Lad, Braniac 5, Mon-El, Triplicate Girl, Princess Projectra, Bouncing Boy, Ultra Boy and Timber Wolf. [Possibly also Karate Kid, Ferro Lad, and Chemical King, possibly not. I'm open to basing some of the characters on more modern versions/codenames. And I've heard a rumor that there'll be a Supergirl imported from one of the modern-era shows; that's all right by me.

It's also a requirement that Wildfire join the team during the first year. (Preferably by adapting 'One-Shot Hero' as one of the first couple episodes and then having him come back later in the season.).

What I want it to be like? Well, I want it to be good. Similar to the first Waid reboot era, except that since they're in a different medium they can feel free to re-tell the best earlier silver age stories beat-for-beat rather than needing to change things for the sake of originality.

Sadly, this may come at the expense of JLU.

And I really don't want it to.

I don't want JLU to end at all.

(Also, this will not be BTAS/STAS/BB/Static/JL/JLU continuity.)

But for me it's GOT to have Brainiac 5 or it ain't the Legion.

I believe the title for the show is Superboy and the Legion of Super-Heroes. So I guess Superboy will be in it.

That's what, 20? With this big a cast I'd imagine it'd have to work like old Transformers episodes, some characters getting a lot of screen time over the course of a series, and some getting horribly shafted.

Forget heroes, I want the villains. Grimbor! The Fatal Five! And I would be tickled pink to see Mordu.

AS long as they do an episode featuring the Legion of Substitute Heroes, I'll be happy. That is one of the greatest team concepts ever. It could be like "The Zeppo" from Buffy.

Not that I watched Buffy...

But will they be taking their "What Would Kirby Do?" approach that worked so well in JLU and applying that to the Legion?

My guess is they'll be giving us a "classic" Legion in the way that BTAS is Batman Classic. What really intruiges me is what new stuff they'll come up with, given their track record with previous series, adding and adapting in a way that works so well with the original material.

BTAS gave us Harley Quinn, Superman gave us a fresh interpretation of Supergirl, and JLU gave us all kinds of neat stuff.

Assuming it actually happens (what is this, the third try at a Legion cartoon?), the happiest aspect of this for me is the possibility of a Cartoon Legion comic book. It'll probably be the closest I've gotten to "my" Legion since, well, about 1990 or so.

And instead of "What would Kirby do," it'd be nice to see "What would Levitz do?" (Which is, to be honest, not that far off from WWKD anyway....)

My REAL happiness at this secret is even MORE secret....

Where an animated Superman and Batman are working together on JLU ...

and a Legion of SuperHeroes exists (um, will exist in the 31st Century)...

it becomes INEVITABLE that we will see

And not just the little cameo he had on JLU, but a knockdown drag where he mops the floor with the entire JLU.

Which he could do.

But the Legion of Superheroes already exists in S:TAS continuity--they followed Brainiac to Smallville of Clark Kent's childhood to stop him from killing him before he could be Superman. That had Saturn Girl, Changeling, and...um Lightning Lad? I think?

I'd sort of hope for at least one season of "What would Shooter do" at least before moving into Levitz mode...


*This is a great opportunity to do a 'perfect' Fatal Five story, giving all five of them independent introductions over the course of time and then doing the Sun-Eater story almost exactly as the original. Or merge the Sun-Eater story with 'One Shot Hero', letting ERG-1 take the Ferro role after the Fatal Five fail...

Hmm. A Pulsar Stargrave/Brainiac tie-in would make sense....and possibly finally make sense of the mess Shooter left when he left the title a second time....

And yes, a "What would Shooter do" season would be great, but only if it was more like a "let's adapt 60s Adventure stories" season... :-)

I'm sensing the time is right for a Quislet renaissance!

Quite effective material, thank you for the article.
russian women