The Return of the Composite Superman 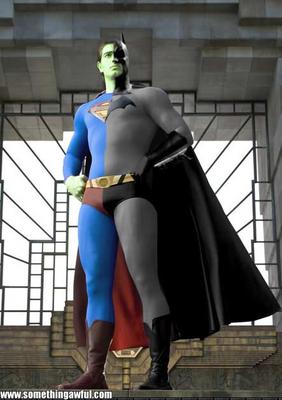 I, the Composite Superman, declare to the world the formation of

the Unsecret Society of Super Composites.

The formation of this group comes entirely from the genius of my 12th-level intelligence ... as inspired by H of the Comic Treadmill. H, therefore, will live to enjoy life under the new regime of the Unsecret Society of Super Composites. We are, however, undecided as of yet about Mag.

Behold and tremble before...

That mind-boggling grotesquery (and my new lover), the Super-Duper, a machine-made creature combination of Wonder Woman, Batman, Hawkman, Flash, and Green Lantern. 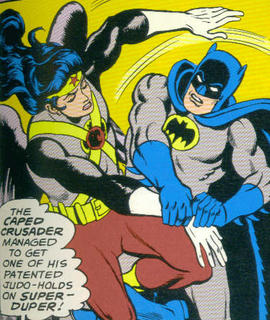 The bifurcated mutant android, the Argonoid, which can use the powers of any two JLAers at a time!

The timeless big guy himself, Amazo, the android sponge-god who duplicates the powers of the entire JLA, seen below in all his butt-kicking glory, humilating the Justice League by defeating them instantly with his stupidest power!

The Composite Man, my 30th century "cousin", with inferior taste and a dislike for authority!

Our new recording secretary, the reticent 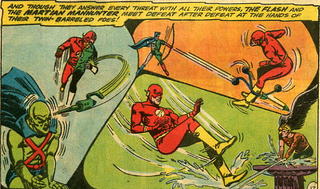 
Our demands are few and simple! Meet them or be obliterated!

1. If there are any other beings like us in the DC Universe, identify them to us, so they can join us ... or be destroyed! 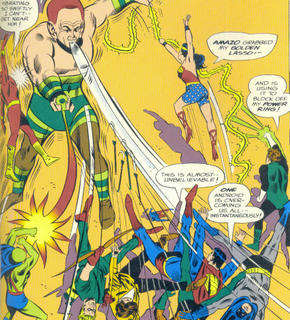 2. The total annihilation of all members of the Secret Society of SuperVillains, except for Luthor and Talia, who are to become our personal round-the-clock love slaves!

3. Mount Rushmore-style busts of ourselves carved in the face of the moon, at a size visible to the naked eye from Earth. Lit dramatically from below! 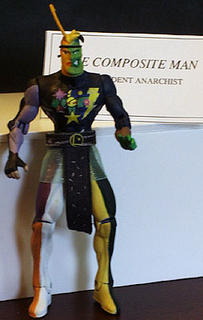 5. The establishment of an nationalism- crushing planetary composite currency that -- what? A "Euro"? Okay, then. Our faces on this "Euro"!

6. Drawings of the Unsecret Society of Super Composites made by every living comic book artist!

7. Joe Quesada's skull, transformed into gold by my Element Lad power, as a paperweight for my gargantuan desk, carved from the ego of Stan Lee!

9. "The Composite Superman Begins" movie, in which I am portrayed in each successive frame by e

10. The return of civilization's most dire venue for the forced juxtaposition of characters in a joint appearance, The Brave & Bold! What? Oh. Okay ... one down, nine to go...

I think you've hit on something big here Scipio. And I'm not just saying that because you're letting me live (thanks for that though).

And can you imagine what Composite World - which needs to be the new feature in a revived Adventure Comics - looks like?

How can you possibly forget Replikon, the alien mother that adapted the abilities of Batman, Flash, and Wonder Woman to assist in the birth of it's children?

(There is also post-Crisis Replikon, a cybernetic stooge most callously and disrespectfully used by Greg Rucka to open his Superman run. But he is a legacy, so we have to take him. We can name him George.)

I thought about Replikon too. Appearance-wise he fits the bill, but I don't think he had the powers of the JLA. I could be wrong about that though.

If I'm right, he could still be the USSC mascot.

And possibly ask her out (even though she is a single mother) when Super-Duper isn't looking."

Everything you ever wanted to know about Replikon is up on the Treadmill. When the Absorbascon asks, the Treadmill listens.

B.I.O.N. was an artificial being with the powers of the Legion of Super Heroes, created to fight the LSH.