Phew! Are you rested enough to climb the next level on the Rungs of Villainy?

Does life get any better than being the Left-Hand Man (the chief Denominated Henchman) of a villain? Yes -- if you're a

So what distinguishes a Sinister Sidekick from a mere Left-Hand Man?

You have your own codename and costume. Not an off-the-rack "the whole gang's wear 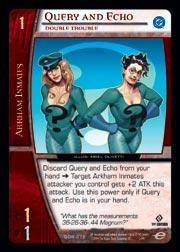 ing matching beanies" kind of costume, but a head-to-toe, unique costume, tailored by Gambi himself. Sometimes, like the Riddler's Sidekicks, Query & Echo, you get a whole wardrobe of one-of-a-kind (well ... two-of-a-kind) wickedwear. This is because (A) the Riddler's a stylin' metrosexual, and (B) Query & Echo will beat him up otherwise.

You have solo scenes confronting the hero, independent snappy patter, tasty armament shticks, and a total ignorance of your limitations. Psychologically empowered by your form-fitting Gambi original, you confidently confront, say, Captain Triumph, whom you call by a derisive and inappropriately familiar nickname like "Cappy" or "Umphster", attacking with some overwrought thematic weaponry like exploding Rubik's Cubes or a bazooka that shoots silver dollars, until the hero, without uttering a word or otherwise acknowledging your existence, pummels you senseless and stuffs you in the nearest trash receptable, splayed in some unnatural tangle of limbs reminiscent of the victims of Pep Comic's Big Moose.

Welcome to the big time! If you do really well as a Sinister Sidekick, you may earn a more extended fight scene where you trade quips with the hero's sidekick. Who knows, you may even get a solo back-up story in The Triumph Family Annual, pestering junior counterpart Winged Victory, kid sidekick Pvt. Struggle, or female counterpart Triumph-Hyphen-Girl. Gosh, that puts you close to becoming an archenemy for Green Arrow! 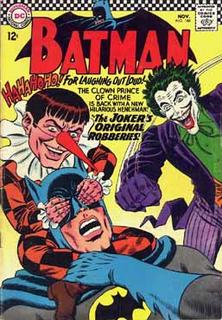 Some Sinister Sidekicks are mercifully short-lived, such as Punchline (another monstrous creation by Enemy of Society Mike W. Barr) and the single most appropriately named character in all of comic book history, Gaggy. But the less you know about Gaggy, the happier you will be.

Some Sinister Sidekicks are sadly short-lived. The marvelous Kitten, Honeysuckle, Chick, Sardine, and (*snort*) Toy Boy abandoned their costumed criminal careers after their first outing (and in Toy Boy's case I do mean outing). From what I hear, Kitten & Honeysuckle moved in together and run a holistic petsupply shop in Van Nuys, traitorous Chick disappeared into the Witness Protection Program, Sardine's working for some outfit called "ProGeneTech", and Toy Boy (*snicker*), having left his best years behind, is the nightshift bartender at a Rehoboth piano bar called "Tinkles".

One of the saddest things in comics is the tragedy of Free-Range Sidekicks. Free-Range Sidekicks think that they're serious supervillains, independent operators, and next up for a commemorative stamp in Zandia. More likely they're badly codependent (they often travel in desperately clingy pairs), poorly dressed (without a snazzy supervillian to supervise their shopping), and get their membership applications to the Secret Society returned to them unopened and marked SENDER UNKNOWN (in blood).

In a sensible world, players like this are editorially slapped around a bit then yoked as sidekicks to a more serious player, to their benefit and his. As free agents, they're nugatory, but, connected to a real bad guy, they can become truly side-kick-ass. This was done brilliantly in the Batman Adventures, where Bronze Tiger, Gorilla Boss, Sportsmaster, and Phantasm were used as lieutenants of Black Mask. They presented much better as high quality Sinister Sidekicks than as low-rent stand-alone villains.

C'mon; does it really take a Geoff Johns to figure out that Double Dare and the Body Doubles need to be working for Two-Face? Or that Killer Moth would be better off as the head of the Penguin's protection racket and the Cavalier as head of the fencing operations (har har har!)?

Of course, it works in other direction, too. Used well, a Sinister Sidekick with the right spark can wind up a respected villain on his .. or her ... own. 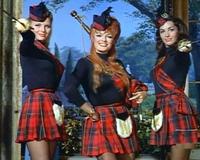 codenames in other posts, it is okay to have a pun-based name if you are a Sinister Sidekick. If you never accomplish anything greater, then that's fine, because your name already says, "don't tell it all so seriously, fanboy". If you do go on to greatness, then you can revel in the Comic Book Irony of saying things like, "Captain Triumph now rues the day he scoffed at Doe, Rae, and Mimi!"

Body Doubles were always a kind of low rent xerox of Adam Warren's version of the Dirty Pair (not to be confused with the original anime Dirty Pair). They really would work a lot better as henchmen, although your average Batman villain is not known for his patience, so I'm not sure how long he'd put up with the their idiocy.

I know I get the urge to blow their heads off within a dozen pages.

Well, Two-Face would naturally have TWO pairs of double-themed sidekicks. That way, whenever one pair gets annoying (or is in the slammer) he can utilize the other one.

The man's supposed to be a gangster, DC; give him a GANG!

Toy Boy (*snicker*), having left his best years behind, is the nightshift bartender at a Rehoboth piano bar called "Tinkles".


I think I know that bar in Rehoboth. Just down the street from Thrasher's, isn't it?

I love the rungs of villainy posts.

Do you by any chance play the Vs. CCG? I did a year or so ago and recently started playing with friends again. Good game.

I'm so glad, Shane! I enjoy writing them, and hope they help people realize that, hey, crime CAN be fun!

I'm a Heroclix man, myself, but Vs. game is a good source for visuals on some obscure characters....

At least, that's what I think.

Funny you should say that, because...he did!!

In the late 1970s revival of Teen Titans, that blip on the radar between the original series and the one with Starfire and Cyborg, Two-Face employed a gang of super-powered identical twins! Their names were Sizematic, Flamesplasher, and Darklight. (No, really. I'm serious). When the Titans first fought them, they had the powers of growing to giant size, projecting flames, and creating darkness, respectively. When next the Titans met the villains they thought they were ready for them, but were caught off-guard when the villains used the powers of shrinking, projecting water, and creating blinding light! Then they learned that there were two sets of villains, and their boss was none other than Two-Face, the father of one of their own members (and the less said about that, the better!).

Interesting, though I was thinking more of normal-powered twins. Like two goons named Mugsy and Bugsy or something like that.

On a different note, how does Arnold "The Ventriloquist" Wesker rank? Is he Scarface's sidekick, or does his MPD rate him as something completely different?

I think we all want to hear about Gaggy.

Yes, more Gaggy! We all could use a good Gaggy now and then.

People! I'm telling you, you do NOT want to hear about Gaggy. You are NOT ready for Gaggy.

The last three people who talked about Gaggy?

Dead. With big smiles on their faces.

I am NOT going out that way.

What, no mention of Harley Quinn? Come on, she's obviously the patron saint of Sinister Sidekicks.

yes indeed, the sinister sidekick give something to the history, humor, more evil, madness, inclusive romance, from my point of view The Joker have the best sidekick, and no I don't talking about that little bastard, I talking about one of the most sexiest women in DC universe, Harley Quinn.