Opening a Can of Sardines

This about 10,000 time scarier than the Brainiac clix. Yes, I paid someone to make me a Human Flying Fish customized Heroclix figure. After all, Vic (as we, his friends, call him) is one of our guest columnists.
I remember the first time I saw the Human Flying Fish. I remember exactly which room I was in, which way I was facing, what the weather was like. It's like how civilians remember where they were when they heard Kennedy was shot, or the Challenger had blown up, or Saved By The Bell had been cancelled.

It was in Super Friends #1, November 1976, "The Fury of the SuperFoes". See, that's him, to the right of the perfidious Penguin. Before the Legion of Doom was 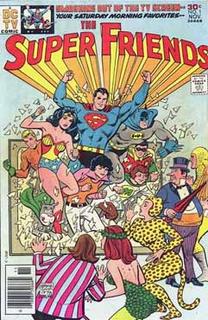 a glint in Lex Luthor's beady eye, the Penguin gathered a team composed of enemies of the SuperFriends, one a piece. They specified that the Penguin was in charge but they needn't have, because, you know ... he's the Penguin. Of course he was in charge. You should have seen him whoop Superman's hiney with his super-robot in the next issue...but I digress.

"How dorky," I thought, or whatever term we used in those days. "Only a comic based on that hokey show would make up someone as stupid as the Human Flying Fish." Oh, the callow shallowness of youth! Many times have I pondered that, with access to a Time Bubble, I would (forgoing travels to any world-altering Jonblar junctures in space-time) head right to the moment I said that, and, appearing in shimmering multi-colored lights 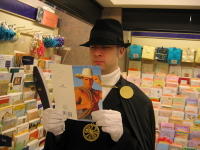 characteristic of silver-age time travel, wallop my young self in the skull with the Aquaman Archive, which (as everyone now knows) contains the original Human Flying Fish story. "Ssssstupid child," I would hiss in my best Kobra-lissssp, anger squiggles radiating dramatically around my head, "now you die!" And then the Phantom Stranger would show up...but I digress.

Meanwhile, back at the Hall of Justice! The SuperFoes, inspired by the examples of Wendy and Marvin (!?!?!?!!), have taken on sidekicks of their own. Are you ready? Chick (*snicker*), Honeysuckle (*titter*), Kitten (*giggle*), Sardine (*snort*), and-- 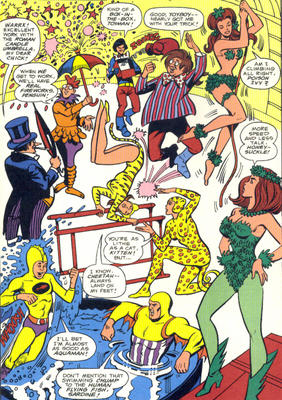 Oh, I know what you're thinking: "Leave Toyboy and his trick-turning box alone! You're just a dirty old man reading sexual subtext into an innocent child criminal! It's not like they show him into leather boots or hooded bondage or grappling with older daddy-types for goodness sakes!" 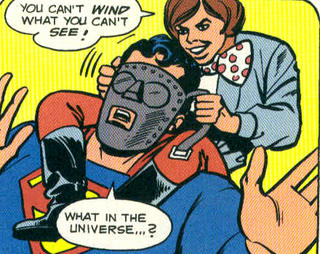 
Anyway, Chick has a crisis of conscience after visiting the Hall of Justice (jeez, Pengers, can't you find a real delinquent?) and betrays the SuperFoes (Ssssstupid child!).

What's the point of this rant ... merely that the return of the Human Flying Fish is long overdue? His return is overdue, true, but my real point is... kid sidekicks for villains is an idea whose time has come.

If you do not agree, take it up with Deathstroke and Ravager.

If you're going to start introducing Kid Sidekicks for villains (a great idea), start with the Rogues.

Even though you wouldn't need to, you could make it "work". They keep going on about how the whole thing is about "family", so give them some surrogate sons.

Isn't the current Trickster essentially a villian sidekick? And I believe Tigress II was trained by her parents, Sportsmaster and Tigress I, so she'd probably count as well.

I agree, it just makes sense, from a villainous perspective, to recruit an impressionable tot in one's war against All That is Good.

A did sidekick is, after all, a downright creepy idea that makes more sense for a villain than a hero.

Back in the Golden Age, a hero's kid sidekick was a handy thing for a writer to employ. Exposition in Tights.

Today, though, it really seems a tactic more ideally suited to villainy. It adds an appropriate sheen of desperation and skullduggery to a villian's efforts.

Which is why a good writer could bring back any villain from the brink of irrelevance, even the Human Flying Fish, simply by showing him employing minors for immoral purposes.*

Imagine if the wacky splash panel you showed wasn't played for wackiness. If instead of the bold primary colors and gee-whiz dialogue, it was all played darker, more sinister, infused with the Infinitely grim n'gritty crisis mindset now taking hold of the DCU. Those villains would seem creepy, dangerous, evil.

*you can't know how difficult it was not to type "immoral porpoises" here. You just can't.

In 40 years time Scipio Jr, upon reading Flash Archives Volume 1069, is going to love this character. He'll be clamouring for a return of "Brazen and the Buff" featuring the triumvirate of Dik Flash, Nephew Sam and Baby Condor.

That, my friend, is substantially LESS likely than Dik Flash.

"Brazen & the Buff"? I'm certain I rented that movie ... was Talvin Demachio in it?

Of yeah, I can see the idea of kid sidekicks for villains spreading like wildfire.

My vote for "Dik Flash" would be APD Zip

Hey, this is fun!

Gorilla Grodd already has a kid sidekick. I think its a son or granson. He tried to turn Impulse's girlfriend into a gorilla.

I though Grodd's grandson was Sam Simeon of 'Angel and the Ape' fame. Is there another or did Sam get tired of comic book editors and go bad?

I think Sardine should appear all grown up in Aquaman: Sword of Atlantis as the surprise mystery villain. I'd buy that.