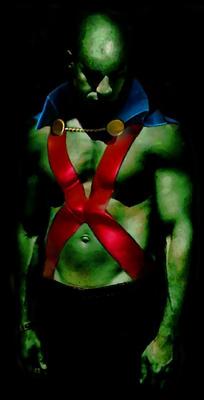 Vin Diesel's won the part of the Martian Manhunter in "Vibe! The Movie, Meng". Looks like he wasted no time getting over to Wardrobe.... This will work out well. Next to Vin, even Mario Lopez will seem masculine.

The next part to cast is "Steel". Not John Henry Irons (a part only the brilliant acting of Shaq could do justice), but Steel the Wolverine rip-off with the fake Golden Age background.

I'm going to need help with suggestions, because we need someone phenomenally stupid. Remember, Steel's such a severe idiot he spent his entire life in repeated unnecessary surgeries replacing his skeleton and innards with artificial parts just because he grandfather told him to. A man with a mind so dim Aquaman can control him like a halibut. A man who makes Jimmy Olsen look like Lex Luthor.

Complicating our casting ENORMOUSLY is your (really poor) choice of Mario Lopez to play Vibe. How the heck can we find an actor who's dumber than Mario Lopez?

I mean, other than Casper Van Dien.
Posted by Scipio at 1:51 AM

Only one actor is dumb enough to play someone that stupid.

He was a member of the ensemble cast of a hit show, but he thought he could do better. So he left that hit show to star in a show that bombed after what, three weeks on the air? Then another one after that that did even more poorly. Now he's filling out applications at Home Depot, while the show he left is still going strong. Yeah, he'd be perfect for the part.

Actually, Dolph Lundgren is a Chemical Engineer who even had an Fullbright Scholarship to MIT. He's not the best actor, but dumb? Not by half.

My vote would be for Matt LeBlanc...

Then how about MATT DAMON!

I say someone who can play dumb, not someone who actual is. ("It's called acting, my boy"). So I nominate Thomas Haden Church.

That kid on the Reba show looks pretty dumb... but again, I take offence at the out-of-proportion Steel-hate evident on this site.

It's not hate, jhunt!

Nick Lachey. I had to look the name up, but he was on some Charmed episodes, and he'd be perfect. (He's somebody's boyfriend or something, right?)

Personally i like Casper Van Dien(http://www.most-wanted-movies.com/star/Casper-Van- Dien.aspx). See his filmography at Most Wanted Movies.