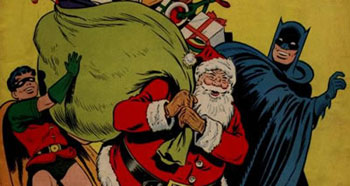 Why We Love the Phantom Stranger V


Because the Phantom Stranger can --and will-- talk smack to anyone. 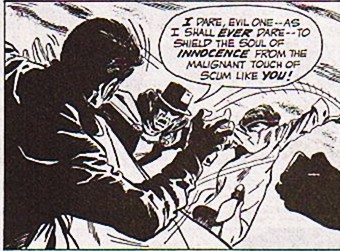 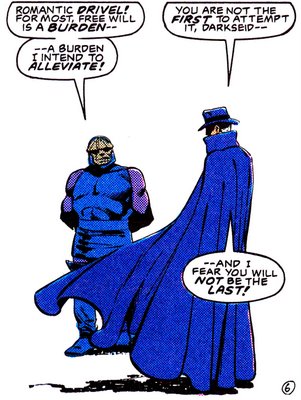 Even a bad-ass Afrobot like Chuma the Cybernetic Warrior-God. 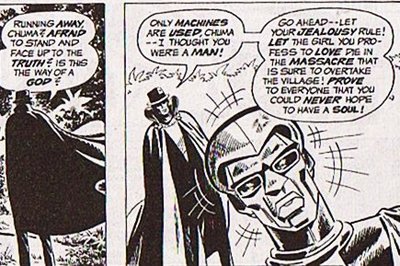 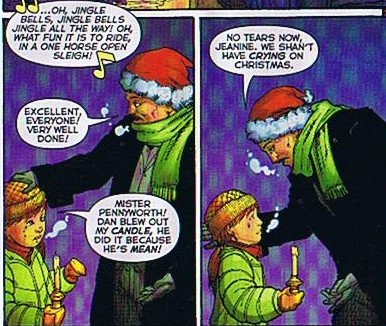 What a cute little girl!

Oh, but her candle blew out. 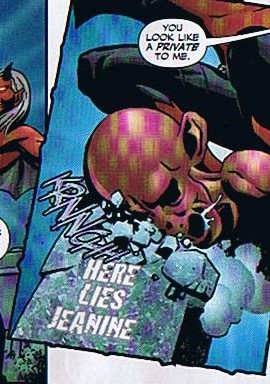 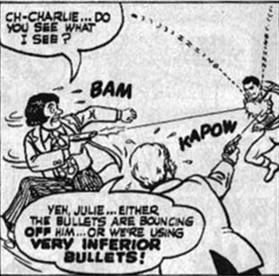 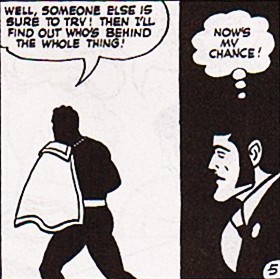 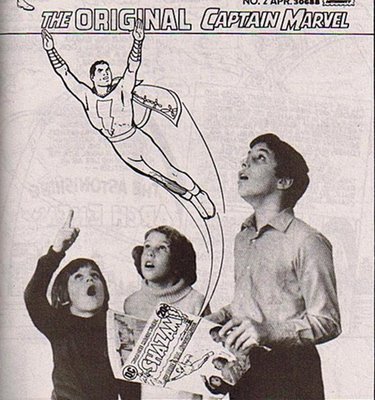 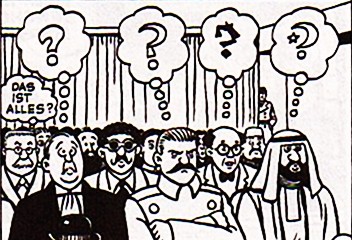 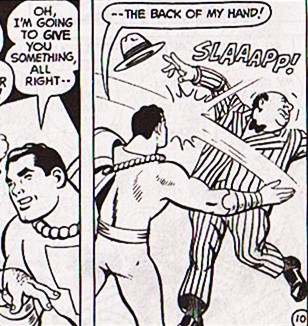 Why We Love the Phantom Stranger IV


Not because the Phantom Stranger pulls this sort of thing. 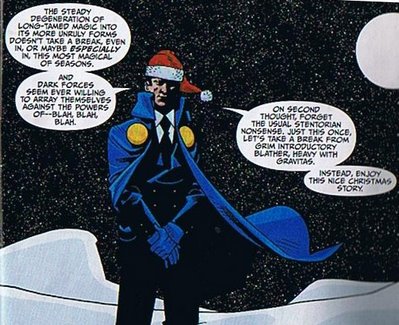 But because the Phantom Stranger pulls this sort of thing off.
Posted by Scipio at 6:13 PM 8 comments:

Blogging in The Holiday Spirit

Well, you clearly have a snarky algorithm that's all your own.That must explain your great popularity. What justifies your presumption in judging me (or motivates your apparent need to do so), however, I cannot fathom.

P.S. As for the delay, that's due to the fact that I don't read your blog any more, it seems, than you read mine. That's probably for the best.

4.5. Generally low-wattage flame. Points off for the grammatical mistake

in the second sentence. Small upmark for the superior tone in the

assumption that I've never read your site, but that's called back by the

delay in your own response.

>Via James Nicoll, the

>Lamest Superheroes of All Time.

>There is nothing insightful in the list, which is generated by essentially

>like the Absorbascon and Chris's Invincible Super-Blog. I'm not saying

>that Vibe's not worth ridiculing; I'm saying that there's nothing

>surprising or insightful in doing so.

>Thrasher, or maybe Rage, and my list isn't surprising or insightful, either.

>If you had ever actually read my site, you would know that I champion Vibe

>specifically. It seems you mistaken that I operate by the same "snarky

>algorithm", and I resent your statement that I do.

There are so many things that made me happy this week in comics. Why, the Dr. Thirteen story and the Infinite Holiday Special themselves made being alive worthwhile, in so many ways.


But nothing made me happier than Wizard.

Specifically, this (from an interview with Adama Hughes, writer and artist on the upcoming All-Star Wonder Woman):

The six-issue arc will even feature the debut of an Adam Hughes-pencilled, plus-sized, junk-food-eating hero -- original Wonder Woman sidekick Etta Candy. "I'm desperate to have her in there and to work in 'Woo! Woo!' at one point," he laughs. 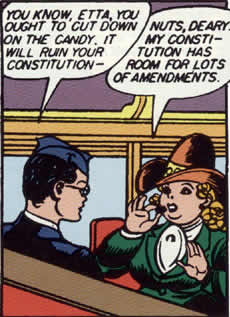 Who do you think Supernova is?

Who is your preacher?
Posted by Scipio at 4:53 PM

The Absorbascon Answers the Big Questions 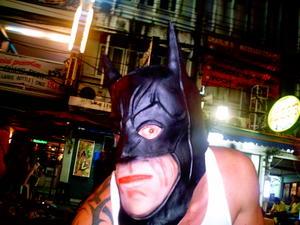 No. Modern comic readers are trained (by Marvel comics) to think of characters in terms of the on-going psychological damage of traumatic events. This makes them incapable of perceiving someone like Batman as anything other than "damaged goods".

Writers who continually show Batman denying himself normal pleasure or as shut off from normal human interactions foster this narrow perception of the character. As an antidote, read some Golden Age Batman. The Golden Age Batman didn't deny himself a full life in order to be Batman; becoming Batman is how he enjoyed life to its fullest.

Sadly, the concept that people might seek fulfillment in devoting themselves to the safety or betterment of society rather than personal pleasure is lost on many readers today, which is why they don't understand Batman. Batman is merely a dramatic extension of people like policeman, fireman, paramedics, etc. If Batman is 'crazy', then so are they. 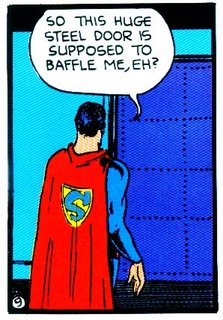 Is Superman too powerful to be interesting?

No. Readers who think of comics mostly as a slugfest between opposing characters, a hero and a villain (or, if you read Marvel, two heroes) think of Superman as boring because "no one can beat Superman". Even on those limited terms, Superman is not "boring", because there are many characters who have beaten him, and many ways to do so. Just recently, Superman was hopelessly outclassed by the Collector and was only able to "defeat" him through a combination of guts and guile.

But the real trick to Superman is putting him in situations where his powers aren't overwhelmingly useful. Again, in the Golden Age, they knew how to do this. Clark Kent often came up against stories -- corruption among government contractors, poor working conditions, domestic abuse -- based on socioeconomic problems rather than crazed supervillains. Such problems are not so easily punched away.

In the Silver Age, they took a different tack. There, Superman's challenge was often about how to use his enormous powers subtly and without detection, so as to protect his secret identity. That's why his supporting cast plays a disproportionate role in his mythos.

Try this experiment. Pretend, for the next day or so, that you have all of Superman's powers. Now, acting as a hero, what exactly can you do? Solve world hunger? Stop all crime in your city? End poverty and injustice? All while living your regular life?

If you think about that for a while, you'll see there are a great many challenges even for a hero as powerful as Superman. 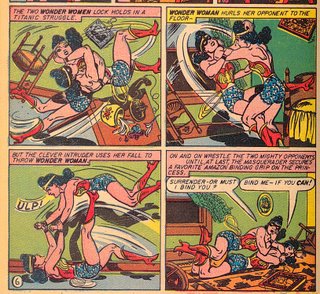 Is Wonder Woman a lesbian?

Wonder Woman's romantic/sexual interest in men is pretty plain, even in the Golden Age, with the ridiculous focus on woman-on-woman bondage and submission (which was clearly more about the sexual interests of her creator than the character herself). Her motivation for leaving Paradise Island is that she is smitten with Steve Trevor, and she wastes much of her personal time trying to gain his interest. Since then, she has repeatedly been portrayed as interested in whether men find her attractive, and has had an intimate, physical on-going relationship with at least one male character; the same cannot be said of her and female characters.

While Wonder Woman would probably be open to lesbian relations, she has consistently portrayed as being sexually interested primarily in the opposite sex. 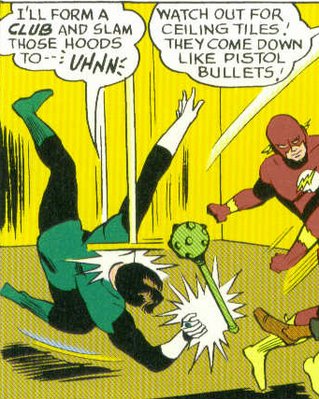 Is Green Lantern really an idiot? 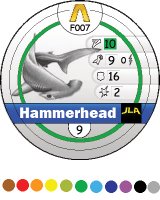 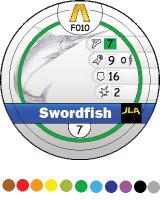 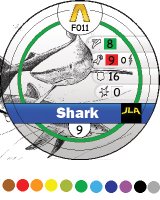 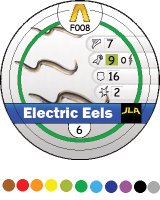 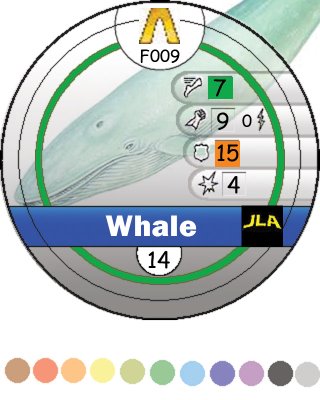