Ali's Health Club for the Soul

This is a villain we need to bring back: 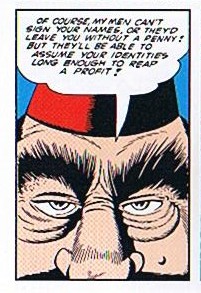 Behold the face of evil.
Well ... the upper face of evil.
First of all, he's an Arab. Once upon a time, Arabs were mostly employed as literary Ethnic Comic Relief or Monster Fodder. You know; the shaky guy whom the Mummy attacks after he's killed the Unnamed Watchman. In Wolf-Man movies, the role goes to a Cockney or a Scot; in Vampire movies it's the Bulgarian toady; in American movies, it's the Black Guy.

Anyway, nowadays Arabs aren't attacked by movie monsters, they are movie monsters. People are afraid of Arabs (or anything remotely like them), so it's a perfect time to capitalize on that fear by bringing back Ali (and this guy, but that's another story).

Second, he preys only on the rich. Now, the fact is, most crime is poor-on-poor violence. But, face it, that's just not sexy. Mr. X snatches Mrs. Y's purse and gets away with ten dollars, two credit cards, a hairbrush, and a lipstick. Yawn; I can read the paper for that.

What I can't read in the paper is Prof. Byzantine's plans to use trained water fowl to halt traffic on Seventh Avenue while his men, disguished as Shriners, fake an outbreak of Legionnaires disease at the Zilvervissen Arms, providing him with the 15 second distraction he needs to replace the Reade Ruby with a paste substitute during the gem exhibit transfer at the Afval Museum. For that, I need to read comics.

Ali preys only on the rich. The filthy rich. Who tread poolside gravelpaths made of the crushed spirits of the myriad myrmidons they have enslaved. Who don't even have the decency to stay in their peacock-lousy penthouses, but must flaunt their superior station by "slumming", as they sashay down filthy darkened alleys wearing their white ties and pearls. Pearls! They're just asking for it.

Ali will punish them. 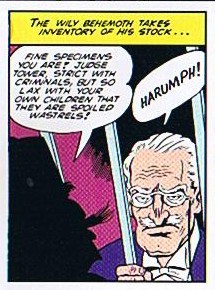 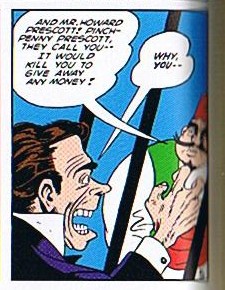 "Why me? Because it is my life's work."
Long before John Cramer in "Saw". 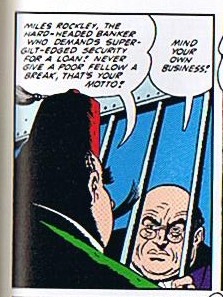 "Punishing you for your sins is my business, Mr. Rockley."
Long before Pinhead in "Hellraiser". 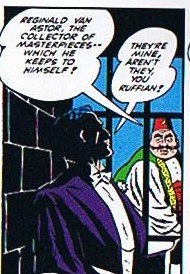 "I understand; I am a colletor myself ... of millionaires."
But not before the Spectre, of course. 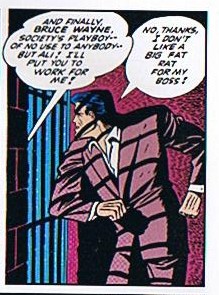 Bruce Wayne, master of the witty comeback.
Nice suit, though.
Sure, Ali is evil. Sure, he's collecting millionaires for a profit. But he steals from them with delicious comic book irony. He replaces his victims with his own men (because we all know how easy disguise is in the Golden Age), who reverse the sinful behavior of the captives, all to Ali's benefit.

In fact, when the millionaires are rescued, their captivity has opened their eyes to their sins, and they each pledge to turn over a new leaf. Except Bruce Wayne, who's a hopeless layabout.

But even Bruce Wayne is changed, and learns to punish sin "the Ali way". 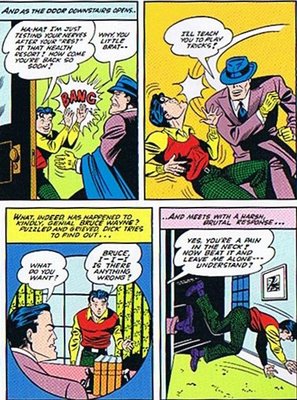 Long before there was Frank Miller in "ASBARTBW"... .
Just kidding! That was the substitute Bruce Wayne. Not that Dick ever suspected that, of course. It was the Golden Age.

The real Bruce Wayne (as Batman) does catch Ali-fever, however. When he captures Ali, he and his young sidekick laughingly torture him until he's nothing but skin and bones. 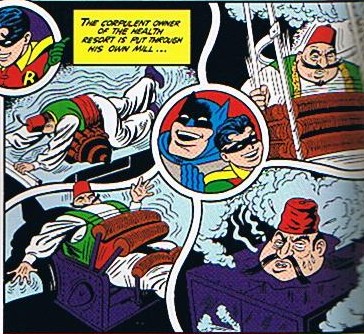 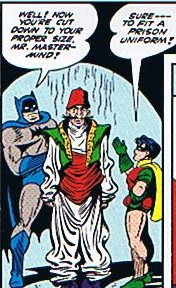 Scip, I love you.

That cackling Batman is positively nightmare-inducing.

The outfit suggests he's actually a Turk, not an Arab.

Yes, I know. In the splash page, he's got a quarter moon on his fez.

But that wouldn't be funny.

What's really creepy, is how much more of a jerk Happy Laughing Batman is than the morose and cranky misanthrope that we have now.

But by all means, bring back Ali.

Damn... Ali lost at least a couple hundred pounds there. Apparently Batman and Robin had nothing better to do than hang around Ali's lair for a couple of years strapping him to a Thighmaster every day. I hope it was worth the massive two-year crime wave in Gotham City.

The beauty part for me is how warped and ugly Happy Laughing Batman's face is -- almost like he's meant to look like an a-hole. Kind of like the times in the Spongebob Squarepants cartoons where Bob and Pat are drawn way off-model, on purpose (ex. Pat's weird oval mouth with enormous buck tooth when he's being complimented by his "Dad" in "I'm With Stupid").

Also, I'd just like to point out that this is exactly the sort of scheme my redesign of Steeplejack would have pulled.

I wonder if such a diabolical scheme could work today?

Uh, excuse me, (Allan reaches for his closest fez) but I have start doing some research.

Now, who do I know that looks the most like Rupert Murdoch?