As a result of buying the Phantom Stranger Showcase, I've been posting a lot about PS here lately. How could I not? He's mysterilicious.

Devon suggested to me that I apply the Absorbascon's patented "Dynastic Centerpiece" model to Phantom Stranger; and so I shall!

Although there are lots of mystic DC characters, I don't think any of them really have a dynasty built around them. Oh, there are hints of it: Blue Devil and Zatanna each have "kid sidekicks" or "junior counterparts" in Kid Devil and Zatara. But there aren't any full-blown dynasties, and maybe that's part of what's kept such mystic characters on the periphery.

You'd think that one of the mystics who hangs out with superheroes regularly, like a Dr. Fate, would be the best bet for building such a dynasty. I submit the irony that the Phantom Stranger -- one of comics' pre-eminent loners -- comes the closest to becoming a Dynastic Centerpiece. After all, he is a member of Justice League... .


Junior Counterpart: the Ghost of Vibe

Just kidding! Still, how fabulous would it be to have a ghostly breakdancing Puerto Rican gang member as the Phantom Stranger's junior partner? Answer: Very. I can just picture PS giving one of his sententious orations while Paco mockingly vogues behind him.

My actual nomination is a different ghost entirely: Deadman. Like the Stranger, he wanders around, mucking about in other people's private lives, then moves on. He makes a nice contrast, too; the Phantom Stranger appears to be just a man with lots of supernatural sound and fury, whereas Deadman is a very regular, plain-talking guy who just happens to be a ghost. 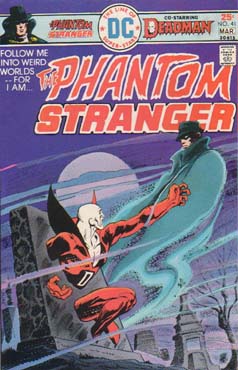 Like the Phantom Stranger, Madame Xanadu has no apparent past. Whereas the Stranger always seems to know what is happening, Xanadu, a fortune-teller, specializes in knowing what will happen.

And, like a good female counterpart, Madame Xanadu has a sassy independent streak. There aren't a lot of people who stand up to the Phantom Stranger; she's one of them.

Song is the young Tibetan flautist whom PS saves from falling off a cliff. He's a tough customer, he's devoted to the Stranger, and his brother's the Dali Lama, which might occasionally come in handy. 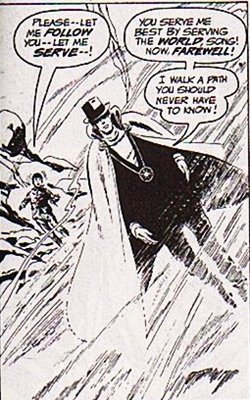 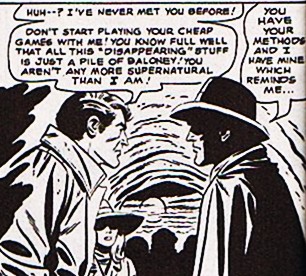 It's actually pretty obvious, when you think about it. The "Black Sheep" isn't bad per se; he's just the person who swims against the very grain that the rest of his dynasty swims with.

No one fits that description better than Dr. 13. He reduces the most supernatural-appearing situations to common phenomena; the Phantom Stranger, on the other hand, lends a mystic importance to even the most mundane of settings. 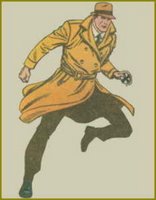 Dr. Occult first appeared in 1935. In a sense, he was the Golden Age's "Phantom Stranger": an (apparently) normal man with (comparatively) normal clothes but great (and vague) mystical powers. He's the ideal person to serve as the "Elder Statesman" of the Phantom Dynasty. 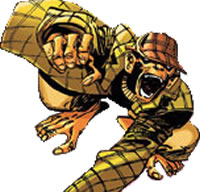 We already know they're friends; it was Bobo who saved the Phantom Stranger when the Spectre turned him into a mouse. One function of an Animal Companion is to add a lighter, more "human" touch to a hero's dynasty; Bobo's earthiness would be a helpful counterbalance to PS's famous portentiousness/sententiousness.

First off, let me clarify something for those of you of certain generation: no, by "????" I do not mean Malachi Throne.

What I mean is I'm not quite certain who this should be. In our model, the Civilian Authority Figure is non-superhero who contacts the dynastic centerpiece and asks for help or otherwise helps spur action. Think "Commissioner Gordon". Who on earth (or elsewhere) would serve as the Phantom Stranger's Commissioner Gordon? 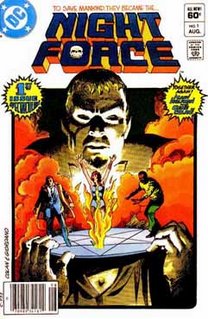 At one time, I would have been tempted to put John Constantine in this role. That was his original role in the Swamp Thing saga: directing Swamp Thing (or others) to mystic troublespots without so much engaging in the action himself. But I'm pretty sure that, as a headliner with a title of his own, he's pretty much grown beyond that.

Ah, but there is another character! He's currently unused, doesn't participate in things first hand, and has a history of calling in others to tackle situations. And he lives in Georgetown: Baron Winter. Like PS he appears normal, but his origins are shrouded in mystery. Unlike PS, who can never stay in one place, Baron Winter has to stay in one place: he's magically trapped in his own house.

Baron Winter would be a good Commissioner Gordon for PS. That is, if such a thing is ever necessary, given that the Phantom Stranger is famously self-actuating. Part of what makes the Phantom Stranger cool is that he simply shows up in a place where he's needed. It's one of his powers.

That's just not the way the Phantom Stranger rolls. The whole world is his city.
Posted by Scipio at 9:05 PM

I want a Dr. Occult Archives.

Actually, Phantom Stranger's Dynasty is interesting because it straddles the DCU and the Vertigo universe. Most of those characters can appear in both, and Phantom Stranger was pretty much confined there for the 90s. You could make an argument for "John Constantine" as the Black Sheep as much as Terry Thirteen. He's certainly the "edgy" 90s-era version of the character.

(Sorry I flashed back to an admission someone once made on Devon's blog and sensed an opportunity for juvenile mockery. I am a child.)

I'm impressed, you actually managed to flesh out a dynasty for the Phantom Stranger pretty successfully! I didn't think it could be done.

Opinions on his origin? I side with the one where he was the last good man in a Sodom-like town -- it underscores both his unique nature and his mission.

Hey If Dr Occult is in the mix. shouldn't he bring Rose Spritus with him?

And what about the shade, I know he belongs to someone else's dynasty, but you can never have enough Shade

I don't know about the other sidekicks, but Dt. Chimp would be fabulous for PS. Monkeys are always fun.

If you know the Stranger's origin he stops being a Stranger.

Yeah, PS's constitently impenetrable mystery is the key to his success.

Agreed, I'm glad they didn't limit us to a single origin -- there are at least four origins out there (plus a fifth if you want to include "lackey of the Lords of Order") -- that said, I know which one makes the most sense to me.

Maybe they can make this an online quiz: "Which Origin of the Phantom Stranger are you?"

I love the idea of a Phantom Stranger Dynasty (with Pamela Sue Martin as Madame Xanadu... oh, you mean the other type of Dynasty). But for Junior Counterpart or Kid Sidekick, how 'bout Kid Eternity?

I remember once, John may-he-Byrne drew the Phantom Stranger wearing a domino mask!! Sure, it makes more sense than his eyes always being in a shadow, but it's just not as visually nifty.

I'll second Kid Eternity for "kid sidekick"--they even have the same taste in turtlenecks!

Nice grouping. I especially like the adding of Baron Winter to the group. Though I also wouldn't mind Tim Hunter getting back into the regular DC 'verse...

One small point, I'd say Zatanna does more than toy with the legacy concept, since SHE is a Legacy Hero, carrying on for her deceased father the original Zatarra...

Not to get too geeky, even here, but a while ago I was looking at a whole bunch of Tolkien-nerd bloggery, and a big talking point among them seemed to be the origin of Tom Bombadil...and while I was floating around that discussion someone brought up an actual Tolkien quote in which he seemed to want to explain it away as a felix culpa, basically saying that perhaps every fantasy milieu needs a sort of "dropped stitch" character, an unapproachable inconsistency that can never be resolved, that acts to preserve the overall glamour of the thing.

Backpedalling, obviously, but I find myself agreeing with it in any case.

But your Junior Counterpart joke begs the question: Where's your Vibe Dynasty?

You must do one, man, if only for fun.

I commend you for creating a legacy for THe Strange,r antithetical as it is! ;)

Though, this stuck out to me:
Baron Winter--unused?

Maybe I'm misremembering, but didn't he show up in the SS: Zatanna miniseries?

Wow! This is one of your best ideas I've read yet.

And I'm for Kid Eternity too.

But exactly when did he come back from the dead? Wasn't he killed in JSA #1 or something? Today in 52 he's apparently alive again.

Hmm; I think of Kid Eternity as fitting more with the Marvels, since he's an "Earth-S" character.

Why, oh why aren't you in charge of DC?
(The comic book company - though the city would also be more... interesting under your reign.)

Please bear in mind that I read the issue only once and felt it didn't make a whole lot of sense, so I may be off on the details.

Hmm; I think of Kid Eternity as fitting more with the Marvels, since he's an "Earth-S" character.

Only since 1982. In the 40s Kid Eternity was published by Quality Comics, not Fawcett. It was in '82 that he was retroactively made Freddy Freeman's long-lost brother. And the series was canceled not long after that, so not much was ever done with the concept.

Come on can't he get cousin status?