Oh, how could one not hate poor Katana? By pitying her, I suppose...

She's clearly one of those characters from those parlor games they play at DC's annual Klordny Party. You know, where the editors point at a writer and artist standing together at the punch bowl and say: "A new character! Female hero! Thirty seconds! Go!" 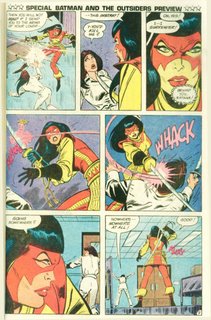 "Quickly, Jim!" the writer says knowing well enough when to use adverbs. "Draw one of those clay Chinese guard statues."

"Heroic red and yellow?" the artist mumbles, lurching for his sketchpad.

"Wht yr gnna c'l ur, M'k?" the artists asks, gripping a yellow pencil between his teeth.

"Let's see, a sword ..." mutters the writer. "KATANA! We'll call her Katana, after her weapon! And she'll be a Japanese martial artist with ties to the Yakuza and a trained samurai with twins and an ancient mystical sword that itself has an evil twin..."

"Hey, wait," the artist says, "Is this a Chinese costume or Japanese?" The writer hisses back, "I dunno, just superimpose a Japanese flag motif, who cares? Besides, it's not like they're going to actually --"

Star Sapphire's new costume does not make me believe in sexism in comics; but the Outsiders does. In the Outsiders, the previously established characters were all guys and were pretty cool: Batman, Black Lightning, and blue blazing Metamorpho. The women were all newly thrown together, slapdash, stock characters: Little Blonde Girl with Rainbow Powers! Kick-ass Samurai Asian Chick! Ugly Girl Who Wants to be Pretty and Thereby Control Men!

You know, I really have to be grateful for the Outsiders. I never really understood what the kids mean by "lame", until I started Hating the Outsiders Week. The Outsiders are a pretty good demonstrative definition of "lame" and they are helping me develop operational ones too. For example, "If you are named after your weapon, or vice versa, then you are lame."

And, no, Green Lantern doesn't count; it's Power Ring who is lame.
Posted by Scipio at 3:38 PM

As I suggested in the comments to your Halo post, I don't hate the Outsiders. I'm kind of fond of them.

That said, Katana was always a tough sell for me. What's the point of a superhero with a sword? DC superheroes weren't allowed to kill anybody, so what's the good of her? They might as well have given her a baseball bat. (Now that might actually have been a lot cooler.)

If you are named after your weapon, or vice versa, then you are lame

Hmm. Good rule, actually. And look who it points right at: Green Arrow. (Who has the same problem I mentioned for Katana, now that I think of it.)

I'll agree in terms of both Boomerang and Captain Boomerang, but what about Green Arrow?

That said, Katana was always a tough sell for me. What's the point of a superhero with a sword? DC superheroes weren't allowed to kill anybody, so what's the good of her? They might as well have given her a baseball bat. (Now that might actually have been a lot cooler.)

Katana killed LOTS of folks over the course of the Outsiders series. Her villainous brother-in-law during her origin storyline, the main villain in the story that introduced Looker, and various & sundry henchmen along the way. There was even debate about it in the letters pages.

I think I'll just keep a (respectful?) silence on Green Arrow. I've said enough on that subject in the past!

Not related at all to this post, Scipio, but I've been thinking a bit about your 'comic book reader vs. comic book collector' post a few months back, and I've already pulled one long-box worth of books for ebay in the last hour. This is suprisingly easy!

So, would Camelot 3000 written by Mike Barr qualify as the most notable example of a comic book professional implausibly transcending his creative limitations?

Personally, I think so.

This will probably be unpopular, but I liked the Barr/Davis run on Detective Comics.

Of course, it sucked once Todd McFarlane took over the art but for awhile there tolerable.

Oh yeah, and Katana is lame.

I've only read a few Barr/ Davis issues, but I liked them. The Barr/ Davis Outsiders issues, however, get no love.

This is probably the wrong blog to mention Blade, but there's a character named after his weapon (or class of weapons) that I like.
With Green Arrow, that's only two, mind you.

Asian super-heroes usually get crappy code names. Karma from New Mutants, Psylocke(not really Asian, I suppose, but I didn't know that when I saw the character initially) & Jubilee from X-Men, and Rising Sun from Global Guardians all sound dumb. The only exception I can think of is Sunfire.

The new Atom & female Dr. Light took names from pre-established characters, so I don't count them.

I like the overly literal code names from the Chinese heroes in 52, however.

Oh yes Green Lantern counts. Lame name. Not as bad as Marrow though.

Scipio! You've been spying on the offices of DC! That's certainly the best explanation of how they "create" new characters that I've ever encountered. *snerk*

"Marrow"? What the hell does Marrow do, suck your bones dry?

That's great, Nick! However, you might find it easier and faster just to give them to charity and write it off. And, given the cost of listing individual items on Ebay now, more profitable!

"Marrow"? What the hell does Marrow do, suck your bones dry?"

She has the mutant power of compound fractures. Not causing them, mind you. Having them.

Green Lantern's weapon is his ring, not the lantern.

And I love the new DC Chinese names. I want to be Inmortal Man With Big Belly.

"Green Lantern's weapon is his ring, not the lantern."

Which is even worse. That's like The Punisher calling himself Ammo Dump.

"If you are named after your weapon, or vice versa, then you are lame."

I can think of one exception: the Hitman foe Nightfist. He will hit you with his fist!

Yeah, but the thing about Katana is that when she was introduced, ninja-mania was so out of control, that the coolness of a katana was enough to carry the character. In the context of the time, it was like, "katana? 'nuff said, that's a cool character."

I demand that a character named Ammo Dump be created.

That is some funny stuff, right there.