Why We Love the Phantom Stranger VI 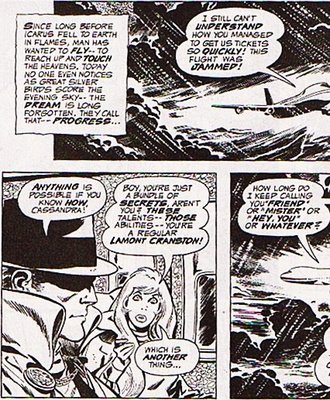 or, The Phantom Stranger versus the TSA

"What is a name? A quick sound lost to the wind; only a man has subtance, not his name, and I am just a man. No name can capture who I am -- who anyone is -- any more than naming a wave can trap it on the sand."

"I have been called many names. Whether you call me 'Mister', 'Friend,' or 'Hey, You' will not change who I am or what I am to you. Call me what you will."

"Got it: 'Mr. Frend Heyu' . Domestic or international?"

"The trials of life are myriad and dwell in each man's heart; the world's darkness knows no borders and where it goes, I follow, hoping to bring light."

"International, then. Did anyone not known to you personally give you any packages to bring on board with you?"

"No one is a stranger to me, though to all others I myself must be one. Such is the path I walk."

"To paraphrase the author, 'mankind is my business'; all its affairs are my particular concern, from the smallest of moral choices to the grandest of righteous battles, and my only pleasure, to assist, in what way I can, those faced with such troubles."

"I see; business. Do you have any baggage?"

"Like all men, I carry my past with me, but I choose not to trouble others with what is, after all, my burden. It is my fate to bear it alone, for I remain ... a stranger."

"Okay, just a carry-on then. Anything to declare?"

"The darkness of evil can never truly conquer as long as at least one remains to bear the light of good." 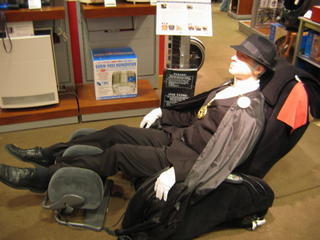 "Please step through the metal detector, Mr. Heyu. Okay, the ... the things on your opera cape seem to be setting it off. Please remove it and put it on the conveyor, oh, and the medallion, too."

"LOOK INTO MY EYES."

Yeah,but if they lose his luggage in Limbo? Good Luck,Dude...

I will remember the lessons of the Stranger as I travel to LA this weekend via Boston and San Francisco in the foolishly bought ticket through Orbitz in the desire to save money. :( It appears that despite saving the money, I bought about 10X the amount in aggravation and long waits.

Is that you in that KICK ASS Phantom Stranger costume?! It is about 900 million shades of dapper.

Oh, no, that's not me. I'm thinner in the face and less grey in the hair.

That said, I am only one opera cape away from having the perfect PS outfit. By the way, did you know that the Stranger's cape is made of crushed velvet? It is.

It's actually stated in one of the stories.

The Phantom Stranger. Metrosexual before metrosexual was cool. And then not cool.

Yeesh. He has one of the most expensive costumes in comicdom (any armored character notwithstanding.) He must have been an angel at some point, because who else would have such expensive taste?

That's really great, I guess even the Phantom Stranger needs some 'me-time' too.

Just so long as they don't try to give him a beard. You can't wear a fedora with a beard.

The Stranger can talk his way into the Pentagon in two lines.

He may not even have to talk. Just walk past the security and as soon as they see that suit, they would KNOW he was needed.

There are very few problems that can't be solved with an opera cloak. And I WANT one. To go with my tiara.