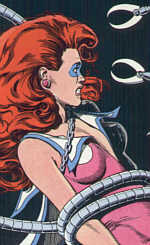 You know, I'm really hard-pressed to imagine what one could do to make "Jean Grey knockoff" character like Looker worse.


Secret magical heritage from an underground kingdom (with a pun-based name, of course)? Powers activated by Halley's friggin comet? Name that rhymes with "hooker"? Career as a model? Violently aggressive eyeshadow that would embarrass a drag queen? Costumes that would embarrass a 30th century prostitute? Severe vanity, enslavement to the idealized female body image, and general offensiveness to women?

Oh, I know! She needs a connection to some trite overused but completely unrelated monster mythos; let's make her a vampire.

Is it any wonder Batman left the title immediately after her origin arc? "I'm going back to Gotham, " Batman was heard to say, "where people like this are my enemies, not my allies."

Looker, at least, gave us One Shining Moment, when she was blown up by Breach in Infinite Crisis; I laughed so hard, milk came out my nose, which was surprising since I wasn't drinking any at the time.

Ladies and Gentlemen of the Jury, Exhibit 19 in the People v. Enemy of Society Mike W. Barr: Hooker, the Girl Gift Wrap.
Posted by Scipio at 8:12 AM

Costumes that would embarrass a 30th century prostitute? Severe vanity, enslavement to the idealized female body image, and general offensiveness to women?

She was just 20 years ahead of her time, that's all. You just described Britney Spears' career.

Costumes that would embarrass a 30th century prostitute? Severe vanity, enslavement to the idealized female body image, and general offensiveness to women?

She was just 20 years ahead of her time, that's all. You just described Britney Spears' career.

Wow! Next to that costume, Star Sapphire's new pink latex nightmare looks a tiny bit better. But only a tiny tiny bit.

To hell with the bow. What about those white spots on her breasts just under her oversized collar: I think they are supposed to represent eyes, with the collar serving as some sort of lids/brows.

Eyes on her breasts.

Hey, maybe she and the Ten-Eyed Man (or are they "Men" now) can get together...

Well, assuming she gets, you know, un-blown-up.

Eyes on her breasts.

What better way to get men to make eye contact?

So are we almost done hating the outsiders, or are we going to go on to hate the even more obscure characters from the post- "Batman and" era and the Winick team? Because there's probably more than enough hate to make it to the new year and beyond in the Outsiders...

"30th century prostitutes?" Aw, it's so sweet of you to reference Princess "Super Paris Hilton" Projectra in your blog.

Hey, BB; dare you to design a decent costume for Looker!

Not wanting to intrude on Blockade Boy's domain, but what is the deal with the tights that only cover ONE leg?

(Thinking back, I believe Sheila E. wore something like that in the film of Prince's Sign of the Times album...)

That just looks like it would feel weird all day long.

"I have the strangest feeling I am being turned into a puppet!"

"I have the strangest feeling that half of the tights I am wearing disappeared!"

"So are we almost done hating the outsiders"

I've read next to nothing of the new Outsiders due to its awfulness. But that may not stop me...

I have a degree in liberal arts, so I don't need any actual knowledge of something to have a strong opinion about it.

There's still Geo-Force to go. I didn't mind Brion, but:

- why make him the leader after Batman split off from the group? Wouldn't either Black Lightning or Metamorpho be better suited to it?
- dumbest superhero name ever. It's like the named-after-your-weapon rule, only worse, because 'geo-force' isn't even a word.

(Oh--you know who's another example of that lame-because-named-after-weapon rule? That supervillain group the Outsiders fought in, I think, the Katana origin story. I forget them all, but two members of the group were Shuriken (who could throw shuriken) and Nunchaku (who had nunchaku instead of hands! Ha ha, loser! Here's 20 bucks! You can have it if you can take it from me and put it in your pocket! No?).)

"I have a degree in liberal arts, so I don't need any actual knowledge of something to have a strong opinion about it."

Well, I was actually less asking about the current crop than the Z-listers that got on the team during the second and third Mike Barr runs. (Windfall, Atomic Knight, Faust, Technocrat, Wylde, the Eradicator, Dervish, Terra, and Dr. Light, according to Wikipedia; I never damaged my eyes by laying them on those ones...)

Looker got offed during Infinite Crisis? Shows you that I was so annoyed by the whole thing that I barely paid attention: that's a moment I would have savored.

Bow before the true Outsiders

Zowie! Now THOSE are outsiders!

Check out the newest JLA for a possible clue on who the next mystery member mayl be.

ya' know...10 years ago they were saying this sort of thing about JLA Detroit..and ten years from now, some younger Scipio type archetype will be hyperblogging the virtues of the Outsiders, how Vibe was an insult to latinos everywhere and how JLA Detroit was a sordid chapter in superhero history...

Looker's origin before the vampire thing was pretty sci-fi pulpy. But the nipples=pupils thing was just a little bit weird. . . .

The good we do is oft interred with us.

But "bad" is forever.

The Aparo art was good.

So good, in fact, that I scarcely remember how lame the stories were. (And they were pretty lame.)

They canceled Brave and the Bold for this?

She was never a favorite of mine, but even if I did hate her I would have to admit, that her one shining moment wasn't in Infinite Fiasco.

Her shining moment was in Detective Comics for the story "Mudpack."

She saves Batman's life and sanity. He in turn thanks her and treats her like a human being. That's got to count for something.

What makes an ingredient natural? More and more leading make-up companies are responding to the demands of today's educated market and offering their customers make-up containing natural and organic ingredients. Women - and more and more men - are realizing the benefits of leaving behind the man-made ingredients used in cheaper cosmetics and looking for the quality and results that come from natural make up. Cosmetics that have been made using quality ingredients - natural products close to the original state, and, whenever possible, organic certified.