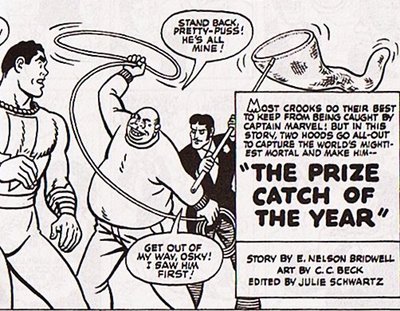 And even E. Nelson Bridwell knows it. 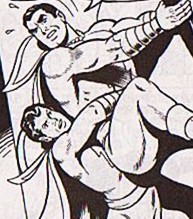 Or likes to boost Junior's self-esteem. 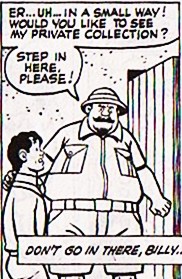 Or a good actor. 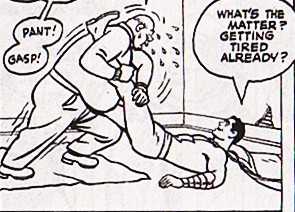 But kind of demanding. 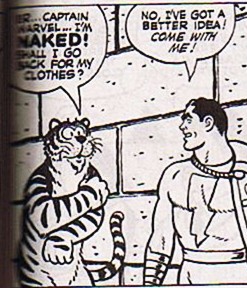 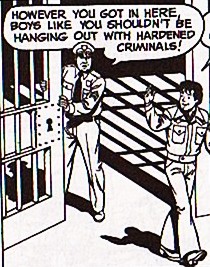 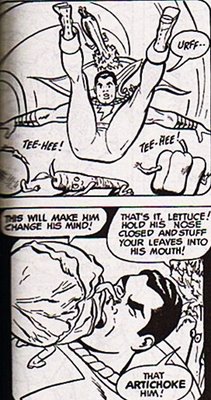 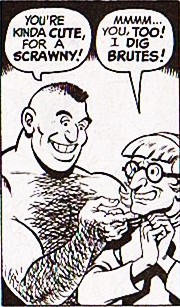 But there's stranger.
Posted by Scipio at 9:55 PM

The Shazam! Showcase is the best purchase I've made in a year. I cannot remember the last time a comic book made me laugh this hard.

"Tawky Tawny talks to the tigers in their native language (Tigerian!)"

That is brilliance itself.

You mispelled "their's" in the last panel.

Lex says it best: "That's impossible! He can't like that suit! And besides, he's a talking tiger!"

LEX LUTHOR IS NOW FREAKING OUT.

Well...THAT was certainly rather odd! Not to mention kinky.

Thanks for destroying everything I hold dear.

I have to say, Scipio, if taking comic book panels out of context and making them appear sick and twisted ever becomes an Olympic event, you've got gold coming.

I'm very excited to be getting this with my DCBS shipment at the end of the month, even though I have a lot of the actual issues already (and am keeping them if only for the Fawcett reprints). And yeah, that Ibac/Georgia thing is disturbing in at least seven distinct ways, probably more.

In the most happy-making panel of the Shazam Showcase, the Marvels respond to Sivana's "Badness Ray" (sigh) thusly:

Damn!! And God bless you for showing me what perversities have been under my eyes for years.

These Showcase books are the greatest things ever published. I hope to get this for xmas. If not, I'm buying it the next day.

Blake was at the end of his rope.

When he and his girlfriend Sara first got together, the sex was incredible-- for both of them.

But after 6 months of dating, something changed. And before Blake knew what happened, Sara simply lost interest in sex. In fact, at one point they hadn't made love in months.

When Blake tried to start something up, she was never in the mood. And when he tried to have a conversation with her about it, she would put him off or even get angry...

He was afraid he was losing her, and it was kicking his self-esteem in the nuts.

Like most men, Blake was accidentally giving off attraction-killing subliminal signals. Signals that quietly destroyed Sara's sex drive. And he had no idea he was even doing it!

The worst part: Almost every guy in a long-term relationship gives off these same attraction-killing signals.

In many cases, the problem starts about 6 months in. And it gets worse and worse as time goes on.

And just like Blake, chances are you won't realize there's a problem-- until it's too late.

But here's the good news...

In his new video, my buddy Alex Allman reveals a simple way to fix this problem fast—and even turn it to your advantage.

You see, when you hit your woman's Playmate Switch you actually project a powerful subliminal signal...

...a signal that your woman picks up subconsciously...

Once she picks up this subconscious seduction signal, it sets off a chain reaction of libido-boosting hormones and feel-good brain chemicals.

The result? Your woman instantly feels sexy and desirable. She also experiences a sudden rush of intense lust. And its directed 100% at you!

Once you know how to use this secret you can keep this wave of desire flowing for hours...days... even weeks.

>>> And it works fast-- In as little as 14 days!Find out how to hit your woman's Playmate Switch right now <<<

When Blake discovered this secret, everything changed. In fact, he and Sara have a new—and much better bedroom problem:

Sara wants sex ALL THE TIME.

Blake says, "We went from not having sex at all... to her being the one to make the first move at least half the time. Sometimes we end up back in bed two or three times in a day!"

And all because of a single technique that reversed Blake's subconscious lust-destroying signals... flipped Sara's Playmate Switch ON-- and kept it there.

Don't miss your chance to discover what Blake and Sara already know. Watch this new video right now...and find out how easy it is to flip your woman's Playmate Switch, too.

P.S.-- The Playmate Switch is just one of the breakthroughs Alex reveals in his new video. And, amazingly, it's not even the most powerful one!Watch the video now to get the full story >>