We're overdue for another Character Donation, where the Absorbascon and Seven Hells take some DCU characters that don't belong there and ship them off to Marvel with a hardy "bon voyage" (previous donations are linked below).

Character Donations 115 and 116 won't be missed since they're already... 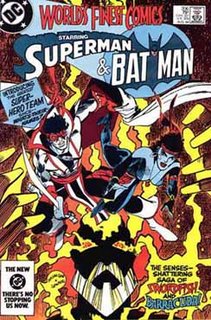 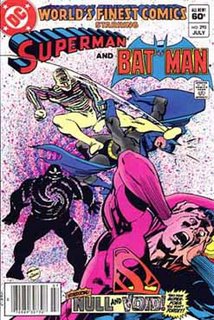 Null and Void are "Exhibit A & B" in the case against World's Finest. When you have a book like World's Finest, eventually the writer will figure out, "Hey, Superman and Batman are in this book, so people will buy it no matter what I do!"

Following Marvel conventions, their one-word codenames are the same as their powers and form a "cute couple" name. I haven't the patience or stomach to relate their story; just trust me on this one.

And since they got their powers from the same place as Swordfish & Barracuda (who had a Marvelesque "senses-shattering saga") let's throw them in, too, as 117 and 118! Marvel lost all its mutants recently; they need some immigration and these guys would fit in fine.

Forget about the Anti-Monitor, folks. THIS is the kind of stuff that caused the original Crisis.

Okay, Null and Void AND Swordfish and Barracuda all gained their laughable powers from an alien artefact belonging to the X'ult...
X'ult???
Better donate all FIVE of this crew to Marvel. They can always make X'ult into some kind of X'rull...
Or will SWORDfish make a amazing comeback side by side with the new Aquaman?

You don't have the cover up, but the first appearance/origin of Null & Void in Worlds Finest was one of the first (if not THE first) comics I ever bought.

Something about two old white dudes shaking hands appealed to me as a kid, i guess.

Then i became a Marvel zombie and forgot all about it. I switched tracks again when "Justice League" started at DC and left Marvel behind.

Years later i remembered Null and Void and tracked down all the issues they appear in.

Stupid, stupid stuff. But if you tried to tell that to me when I was a pre-teen i would've stabbed you in the throat with a crayon.

It's been a long time since I read it, but...didn't they hint that N&V were gay?

Speaking as the guy who steered you to this era of World's Finest, Scip, I'm dying to read your take on The Pantheon (designed by Walt Simonson!) and Sonik The Superhero Of Sound.

Oh man. I loved Null & Void when I was a kid. I thought they were the coolest, something about a rich guy helping his schleppy pal defraud the IRS with super-powers? With an appearance by Ernest Hemingway thrown in for good measure. That's what comics in the early 80's were all about. They're the only reason I learned the word "eidetic". I'll admit the follow-up story was mind-bendingly awful (although Swordfish & Barracuda being pirate superheroes had a certain charm), but their first appearance was classic late (post-Robin) World's Finest fare...

Quite helpful piece of writing, much thanks for this article.
fun science experiments | Trenton real estate | printable Canadian coupons