Okay, now this post is chockful of spoilers for JLA 242, so those of you who haven't had the chance to get to the comic book store since September 1985, you have been warned.

In this issue, Gypsy is eaten by a bear.

Ha, ha! I got ya! Gypsy, who walks without shoes or socks through the ghettoes of Detroit, scares the creature away by showing it her feet. Barefoot, 1: Bear claw, zero. 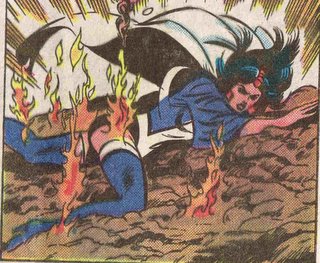 Meanwhile, in another part of the woods, a sexually frustrated Zatanna's booty still burns brightly for Dale Gunn.

"How dare you cast me aside for that bead-braided trollop, Dale Gunn!" she smoulders. "See me burn with passion in the Naughty Schoolmarm outfit I wore in the underground film Headmistress of Hotath." 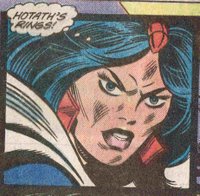 Hotath's Rings:ribbed for your pleasure. Should have pulled those out sooner, Zee. Dale Gunn might not have left you.

Just kidding! Actually, I don't know what Hotath's Rings are. Just part of the whole "Marvelization" of Zatanna, where she spouts silly Dr. Strange-isms, throws herself at colleagues, and blathers on about her Homo Magi genes as the source of her abilities. Oh, Zee, somebody named Wanda's on the phone, asking you to return her schtick. 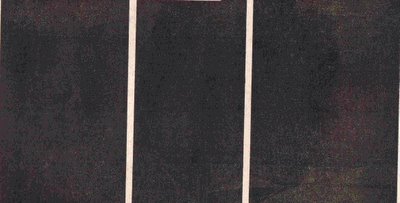 Yes, it's three panels of Vixen, sitting in the dark (you can tell that's Vixen, right?). There are actually four panels like this, but I figured you'd get the idea. Oh, and for you sharp eyed artist types ... you're right! I did, in fact, accidently rotate those panels the wrong way, so they are upside down. Sorry.

Well, as dramatic as that finale is, I was more impressed by other developments in the storyline. Ya see, in this issue, Vixen and Vibe perfect their soon to be patented battlecries.

"Brother Roadrunner, lend me your sound effects!" Vixen prays. Kheeww? No one knows quite what Vibe is trying to say, but that's generally the case, battlecry or not.

In other heartstopping action, Aquaman finds a comb and the Martian Manhunter (never the most stable person) starts to think he's an Injun Brave in one of those old Tom Mix movies he used to watch alone in his Colorado apartment every night in the 1950s.

J'onn! J'onn, come back us to now. We'll ... we'll give you another series. Yeah. No, no, the guys at editorial are serious this time. There ya go, big fella!

But I think the most memorable part, the scene that I'll treasure for the remainder of my days is this one, a little feature called Steel versus Amazo. 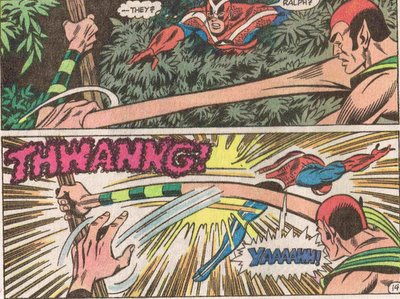 Why the HELL is this series not in trade paperback yet? Entire generations are being deprived!
Posted by Scipio at 4:57 PM

Scipio, is there something wrong with me that I really liked this series when it came out?

Could somebody tell me what's up with Amazo? I only know about him from JLA #241 and #242 and I had trouble figuring out what his deal is.

I also have no idea how they all got out of the hole after Amazo threw the boulder on them.

Amazo is the single greatest evil robot supervillain ever created.

I think Grant Morrison should write an Amazo series.

"Kheeww" is the sound of a kiwi attempting to attract a mate by acting as though it is a seagull with a broken wing. I'm not sure what any of this has to do with breakdancing, but then again, I am not well-versed in the ways of Vibe, whose brilliance is obviously far beyond my comprehension.

Amazo is an android who had all of the powers of the original JLA members (pre-chrisis). I think he added some of the newer members' powers along the way.

At one point, Amazo had the powers of anyone who joined the JLA. And I mean anyone. Black Lightning showed up, and Amazo could suddenly shoot lightning. He was eventually defeated by Superman yelling that the League was disbanded, thereby causing Amazo to lose all his powers because Professor Ivo apparently programmed an amazing dedication to semantics into his little pointy-eared head.

I love Amazo so very much.

I just re-read these issues and I forgot how much I disliked the JLA then. I bought them to keep the run current for the collection, but I barely if ever read them.

Still better than the 90's though.

Thank you for answering my question about "What's the deal with Amazo?"

For fun, I looked him up on Wikipedia.

Forgive my mid-80's DC ignorance, but is Gypsy like Janus with a face on the front and back of her head or is that the artist's portrayal of her spinning her head exactly 180 degrees without moving her shoulders?

So I'm guessing that Amazo used Vibe's power, which ment that Vibration was no longer man-made, which ruptured the multiverse and allowed Commander Steel to exist in the past and be seduced by the wily charms of Dale Gunn one night, and they built Steel. Am I on the right track here?

~Aquaman walks into the confrence room. After pulling Vixen and Zee from the lap of GUNN he begins the meeting.~

"Ok gang Amazo is loose in the park stiring up trouble with detroits local bear population."

~Zee and Vixen stare at each other, both planning ways to eliminate the other in their sleep. Steel drools while Ralph and Vibe discuss a possible joint venture into pornography. J'onn nibbles on oreos while talking to himself. Gypsy tries to say something but no one cares enough to recognize her.~

"Right so I've been thinking... Amazo is a robot who copies powers right? So let's have him take on Steel! He's already a robot so Amazo will be rendered powerless! Gypsy can handle the angry bears."

~Nobody chimes in to point out Amazo still has powers from before. Gypsy raises her hand trying again.~

Dear Scipio, Zatanna invoking Hotath is even worse than the Scarlet Witch and Dr. Strange amalgamated...

Quoting his name just shows that Zatanna is a witchy pagan chick.

'Cos Hotath was one of the elder gods in King Kulls Atlantis, in the stories written by Robert E. Howard. So it's a sort-of Conan-tie in.

Amazo could have used his Green Lantern power, or Superstrength, or a passing school of flying fish to take down Steel. Instead, he flicks his own arm like a rubber band! Genius.

I've never read a single JLDetroit comic, but I know the last few issues were written by J.M. DeMatteis. Does that mean all the characters talked about their feelings, particularly the joy they felt in the innocence of childhood? Did they speak to semi-Eastern mystic avatars? "In this issue, you dare not miss: Vibe vs. the dreaded...Ennui!!!"

"the last few issues were written by J.M. DeMatteis"

They were. You may be surprised that, while he wrote some clunkers, the final four-parter where Prof. Ivo attacks the Justic League was innovative, impressed me and is now one of my favorite stories.

Some of the best tragedy in comics I ever read, actually.

I like some DeMatteis (particularly Brooklyn Dreams & Moonshadow, despite his tendency towards preciousness, and the JLI scripts), but the man has his themes and sticks with them. All writers have their tics. He's not out and out bad like later Wolfman or Claremont, but I peaced out on DeMatteis a few years ago.

I quit reading JLA just before the Detroit Leauge appeared.

It may surprise some to know that smelliness started before the move to Detroit. I should go reread and see exactly where I left off. I seem to recall a giant Atom gone berserk on the cover of one of my last issues.

Ah, Gerry Conway. Wrote some cool stories here and there, but alas, his JLA was bad.

As far as the marvelization aspect-- I never thought of that before. Teen Titans was certainly marvel, although I appreciated the Marveleseque drama with the DC Mythos (and still think that can be a winning formula). Teen Titans didn't invent it thoough-- LSH and All-Star had used that style ages earlier.

Speaking of bad comics and coming full circle, I ought to go dig up some really bad comics-- Gerry Conway's LSH. shudder

JLA:Detroit is CRYING OUT to be animated Sealab 2021 style on "Adult Swim".

As much as I'd love to see an "Adult Swim" version of JLA:Detroit, I have to admit I bought the special where the team debuted back in the day --- AND LIKED IT.

The resulting series lost my interest quickly - looking back, I didn't see the appeal of the "Love Gunn," I guess - but I've always had a certain fondess for Vixen, Gypsy and even Vibe. (Loved the episode in JLU where Vibe was favored over Booster Gold in a knock-down, drag-out with Mordru.)

No love for Steel, though. Leave that Captain America wannabe in the junk yard.