"Dale Gunn." Say it soft and it's almost like praying. There are so many delicious things to pick on in the Justice League Detroit, but "Dale Gunn" has a flavor all his own!

Okay, you'll remember that, back in 1984, having been abandoned by all the recognizable heroes of the JLA, the foursome of Aquaman, Zatanna ("!daeh ym no raeppa tah edepitnec deR"), Ralph Dibny the Esophagated Man, and J'onn J'onnz the Martian Enabler have just picked up straycat cum supermodel Vixen, then agreed to shack up together in an abandoned Detroit factory hiding a SHIELD-style hi-tech underground facility offered them by an aging nutjob Captain America ripoff named "Commander Steel" as payoff for letting his braindead cyborg grandson Hank into the League. Part of the package was the man, the legend, Dale Gunn, Hank's surrogate father. 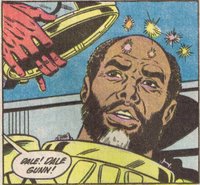 Dale Gunn is basically Uncle Phil from "Fresh Prince" only ten years older, under a much stricter diet, and wearing a high-tech neo-egyptian aerobics outfit from the Alexander Luthor Man of The Future Collection.

And tobacco. Not that he uses tobacco. He just smells like it naturally.

Let's stop for a moment and take a look at the male cast of our superpowered Real World: Detroit, shall we?
So what happens? 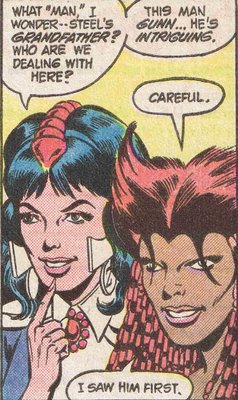 Oh. Well. Of course. Must be the smell.

From this, I can only conclude that writer Gerry Conway simply has never met any women. At all. Perhaps he was raised by Trappist monks.

Actually, my other theory is that with Dale Gunn, Conway is reinventing Jimmy Olsen for the 1980s.

Jimmy Olsen was the avatar of the reader of his day. Geeky Jimmy Olsen says, "Come to the DC Universe where an ill-dressed underage nerd just like you can have a high profile job without any credentials, be best friends with Superman, and have his own fan club of under-nerds!"

By the 1980s, the comic book audience has evolved, and Dale Gunn is their man. Grizzled Dale Gunn says, "Come to the DC Universe where bald smelly older guys with bad facial hair and no social life who live underground and work with machines just like you get hit on by seductive, half-dressed magical heiresses and man-hungry supermodel animal-women. Cookies included."

Oh, but surely I'm exaggerating, you say! Zatanna and Vixen are just, you know, teasing each other about being "dirty girls" and "doing it" with the custodian. Girls are like that, you say; you know, because you've seen Sex in the City and Desperate Housewives. 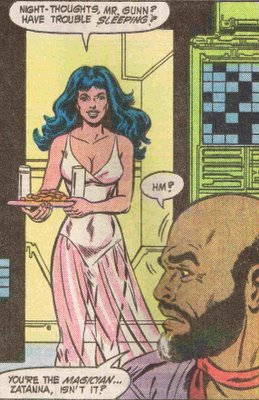 Boy, nothing gets past Dale, does it? And see, I told you; cookies included.
"Night-thoughts", huh? Nice one, Zee, I'll have to use that when I'm on line at Studhunt.com. 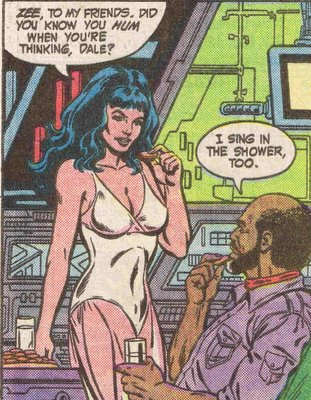 Gee, Dale; is that a glass of milk in your lap or are you just happy to see me?
And, Zee, it's almost like you're desperately looking for a substitute father figure, as if -- oh yeah, that's right. I forgot... It's okay, Zee, we all have our issues. 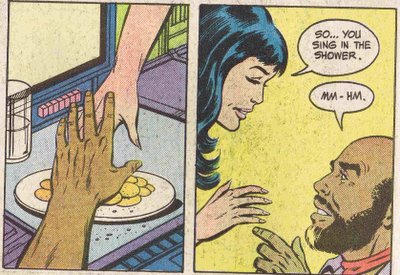 Yow; Jungle Fever. She's Gotta Have It, indeed. And, I might add, it seems that This Gunn's For Hire.

But it's not like Zee's a tramp, you know. She waited until almost a full 24 hours after they met and she made sure he knows what her name is. Good girl, Zee. Zatara would be proud. 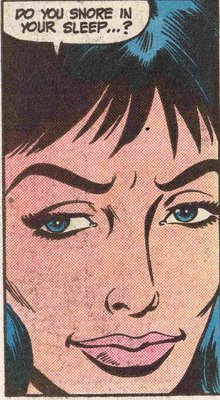 This, you know, is just the first issue of Justice League Detroit. And we haven't even gotten to Vibe...
Posted by Scipio at 2:47 PM

By the look of her beltless kimono (paterned after "the Executive" trenchcoat line created by Jerry Seinfeld's dad), I would say that Vixen was also busy having some night-thoughts... It's bad enough that the Marvel-theft of the time sunk all the way to Vixen swiping Wolverine's hair stylist, but what the $%#! is the deal with that wierd growth on the back of her head in the kimono picture? You say it's just her beaded dreads, but I say that it's a mutant abalone that Aquaman has commanded to graft itself to the back of her head a la Starro's starfish.

Good freaking Lord. There is absolutely nothing that can be said about this except that Gerry Conway must think that balding black men who stink of Jack Daniels and Penzoil are sex symbols on the same level as James Dean and Barry White.

And that only raises more questions than it answers.

Mr. T Gunn - "I pity the fool who doesn't know that Dale Gunn is a sexy freak."

B.A. Gunn - "Hannibal, let me get my welding gear out of the van and I'll make you a cannon that fires cabbages. Then I'll use the back of the van to show Zatanna, Vixen and Amy what a real man can do."

True story. Attractive young girl walks into my comic book store, looking totally lost. I ask if I can help her. She says, "I'm looking for some stuff that my dad wrote. He used to write comics or something."

As I handed her a volume of Essential Spider-Man, you could just smell the apathy coming off of this kid. She flipped through the book for about two seconds, said, "Can I give this back to you?" and walked out of the store.

"The Conway Legacy", ladies and gentlemen.

Whoa. I never heard THAT one before, DVS. Sobering!

The funniest thing about this is Gunn isn't phased by it. Beautiful attractive women hitting on him and he isn't even caught off gaurd.

Proof enough that it happens to him all the time.

You've got it all wrong, Scip. Dale isn't James Avery, he's Issac Hayes. And do the ladies love Issac Hayes? Ya damn right!

I knew I made the right decision in donating the JLD issues. I couldn't see the beauty in them for myself. I needed a fresh pair of eyes.

Like a large mosaic, if you're too close it doesn't make any sense. Only at the aporopriate distance can you...wait...is Gunn wearing an ascot?

It's the ascot. Chicks dig ascots.

I am rarely a toadying sycophant, but dayum, Mr. Scipio--your blog is the best comic blog out there.

You brutally skewer the comics I love, and make me in turn love them all the more for entirely new reasons.

That's quite a gift, good sir.

Let me get this straight...
Steel is the grandson of "Commander Steel", and Isaac hayes is his surrogate dad?

Whatever happened to his real dad?

And why why why is the grandson a cyborg just like his granpa?

Amazing coincidence?
Some weird piercing fetish thingee?
Or could it be...

Actually, Dale Gunn wears a red neckerchief, like a French apache dancer. Ascots are fuller and tied and arranged differently.

Hank is cyborg because his grandfather wanted to make him a tough guy ("not like his his father who loved life too much and so didn't survive 'Nam"). So Hank spend his entire life in needless painful surgerys replacing all his body parts to meet his grandfather's expectations.

Sound familiar? It's quite similiar to the origin of the new Ragdoll from Villains United.

Oh, and that's NOT Hank's skin, it's plastiskin covering metal underneath. As we discover later when he's damaged, there doesn't seem to be anything organic left of him except his brain. If you ask me, that should have gone first.

CLEARLY there is no AMA in the DCU. Where's Dr. Scott when we need him?

that's NOT Hank's skin, it's plastiskin covering metal underneath. As we discover later when he's damaged, there doesn't seem to be anything organic left of him except his brain.

Yeah, Hank's basically a brain in a jar that's carried around by a mannequin. Kinda of like Paul Dennis, the original Robotman, but without the really fun dog....

Uh, yeah, umm, much as I appreciated Zatanna wearing lingerie, having all the women gravitate to Dale Gunn was pretty stupid. But that's just one of the many stupidities overflowing JLD. You could probably devote this blog to dumb stuff in that first issue (JLA Annal #2, for the record) and not run out of material for several months. My favorite stupid moment is the last panel on Page 39 where Vixen catapults herself into the air next to a wiggly Vibe and says, "Vibe was this YOUR idea?"

I still love JLD, despite this, maybe because of it. Gotta love that Chuck Patton art!

No, I will not defend how improbable it would be for the beautiful heroines of the Justice League to fall for Dale Gunn. But just to offer a contrary viewpoint, let me suggest that Vixen and Zatanna want a "real man." And -- maybe because of a personal moral code, maybe because they don't want to mess up "office politics" they will not sleep with a married co-worker. At that point, Dale Gunn becomes the only choice left by default. Observe:

Aquaman: married. See Mera.
J'onn Jonzz: not human. Alien. From Mars.
Elongated Man: married. See Sue Dibny.
Steel: not human. Cyborg.
Vibe: Scipio would know better than I would, but Vibe's behavior suggests the ladies would be "barking up the wrong tree" with that young man. Vibe has a lot of "Kyle Rayner" to him.

It's not like the ladies have impossible standards. All they are asking for is a single, straight human. And in Justice League Detroit, they do not make their male heroes single, nor straight, nor human.

Would not have sex outside his species,
Roel

Delurking just to say that the story about Gerry Conway's daughter just cracked me up. And the rest of the blog ain't bad either. Hope I'm not too late for delurking week.

"At that point, Dale Gunn becomes the only choice left by default."

Or, they could, you know, LEAVE THE HOUSE to find someone.

I mean, this isn't Marvel where you pretty much HAVE to sleep with someone on the team.

Zee's weird, sure, but does an international supermodel like Vixen really need to shtup the handyman?

"You could probably devote this blog to dumb stuff in that first issue (JLA Annal #2, for the record) and not run out of material for several months"

Oh, and that panel you liked?

So, um, could someone explain the red caterpillar hat to me, please?

It's easy.
The red caterpillar hat is actually a real caterpillar from Aldebaran VII, also known as the "Conway Brainleech" that causes weird and deviant behaviour for the sake of plotlines.

Plus, if you read Morrison's SEVEN SOLDIERS issues of Zatanna (which I somehow suspect you haven't), Z got into trouble last time because she magicked herself up a sex partner.

(I've tried this talking backwards stuff, myself. It doesn't seem to work on our Earth. )

"she magicked herself up a sex partner."

Like Zatanna's not ATTRACTIVE and FAMOUS enough to get some on a Saturday night?

Get some help, Zee!

Red Caterpillar Hat. Isn't that one of those college-rock bands?

Not yet, Cap, but it about 3 or 4 years, when the highschoolers reading this blog head to campus, it WILL be.

Actually, the whole point of JL Detroit is that they couldn't leave the house since they had to be on call 24/7. So Dale Gunn is really the only alternative.

Didn't Z have inappropriate office flirtations going with both Firestorm and the recently-apparently-widowed Barry Allen? Apparently dating John Constantine leaves a girl constantly on the make.

"Hey, check out ''these'' cookies, they'll give you some night-thoughts!"

"Ladies, please... there's enough Gunn for both of you!"

(rfjmqnuy-- what Zatanna says with her mouth buried in "animal fur".)

Sorry to bump yet another past its freshness date, but this one was just irresistible.

For all bad you might say of Mr. Conway, he gave us Firestorm, and for that I say he's pardoned of anything else bad he wrote. Firestorm is awesome.

I now go back to the future...

I always hated this issue, so out of character. I'll have to write an article on it eventually.