Why don't I post much about the Flash? I mean, other than the crushing boredom of The Slowest Stories Alive? Well, I'll tell you.


I cower in existential dread of the endless expanse that is Central/Keystone City. 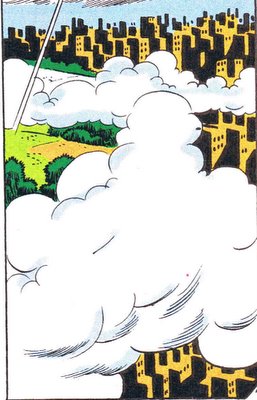 I'm not one of those sheltered, agoraphobic housewives. I enjoy the country, the beach, and the famously broad sidewalks and avenues of the District of Columbia. But Central City? That's another thing entirely.

In Central City, people have to drive to the mailbox. Their own mailbox. 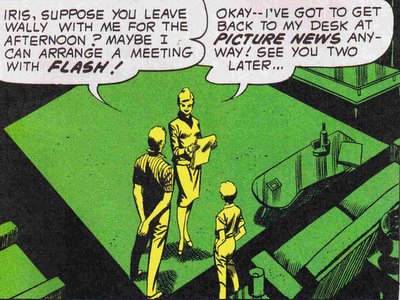 "Get back to my desk"? For pity's sake, Iris, it'll take you two hours to cross that living room. And probably a passport.

What is this vast complex? The National Science Center? NIH? STARLabs HQ? No. It's Barry Allen's back room. In his APARTMENT. In your house, this sort of room is barely big enough to hold the Cybex machine you don't use. In a Central City apartment, it's about the size of a bowling alley. 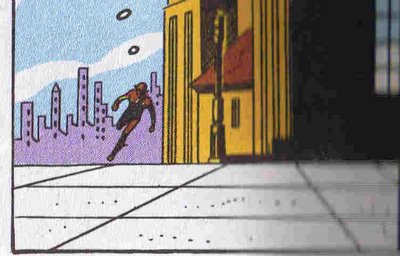 Oh, wait! That is merely a street; there's no median strip. I shudder to think what a Central City avenue looks like. Probably like the Gulf Stream made out of asphalt. 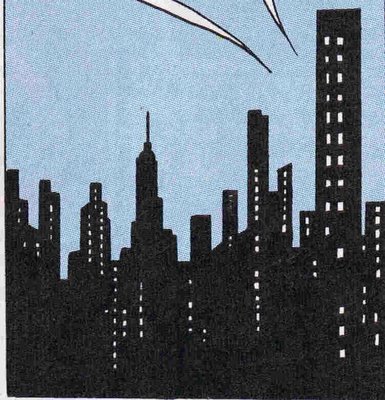 In Central City, every building must be about 700 stories tall. And miles and miles away. It's part of the building code.

The elongated buildings even freak out the freaky Elongated Man. That's why he moved to Opal.

How long do you think the Central City skyline is? My theory is it occupies the entire bank of the Mississippi, with Keystone mirroring it on the other side.

Do you remember that Grant Morrison JLA story where Starro the Conqueror was the size of the Hudson Bay? Well, Starro won't attack Central City, because he's afraid of getting lost there. That's how big Central City is. 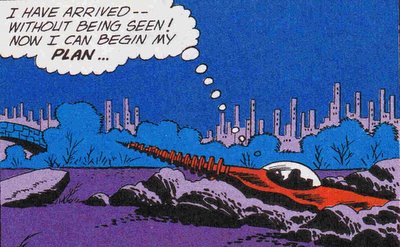 "Without being seen"? Duh. As if a little thing like a jet-sized earthdriller emerging from the ground is going to be noticed in a Central City park!

Other cities are located in counties. But Central City has counties in it. Whole states even, the ones that never get mentioned in comics. Illinois, Wisconsin, Ohio, Michigan, Indiana, Kentucky, Tennessee, Missouri, Nevada, Idaho, Utah. All of them are mere neighborhoods within the sprawling madness of Central and Keystone City.

Except for Kansas. That's one giant farm, run by a kindly old couple and studded with kryptonite boulders every thirty yards.

Who conceived of Central City this way? Was it Carmine Infantino? It's as if the artist had lived his entire life in the midwestern suburbs and all knowledge of cities was kept from him. Then, someone described what cities were like and made him draw them. Julie says, "Well, Car, it's kind of like where you live, only the buildings are much taller and there's more people. Millions more." Carmine goes, "Got it! Room for millions... ."

I suppose it makes a certain comic book sense. In any normal place, Flash would catch all the Rogues nearly immediately by simply searching the whole city. But when your city encompasses the entirety of the territories explored by Lewis and Clark and then some, that's a tall order, even for the Flash.

It's useful, too. Central City is the answer to many of those nagging questions that pester your suspension of disbelief.

Oh. And, in case you were wondering, the principal industry in Central and Keystone ... ? 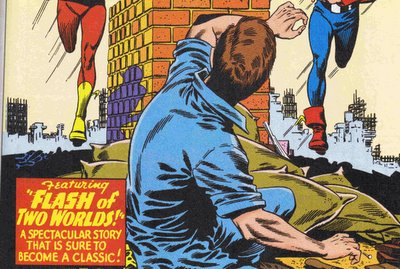 Construction.
Posted by Scipio at 7:48 AM

Man, those wide boulevards are like something you'd see in Russia. Makes me think that one of these days the Flash is gonna run into Raskolnikov, skulking down the street on his way to kill an old lady.

Only, since it's DC, he'll probably have some kind of funky gun that shots purple rays or something.

Ahh, the true story behind Flash of Two Cities revealed. The Thinker, The Fiddler, and the Shade didn't hide a neighboring city. Due to the Shade's powers, they were simply the only ones who were able to find it once it was engulfed in Central City's massive shadow! It all makes perfect sense now.

This post struck me as being one of the funniest things I've read in months (and I say that as a life-long Flash junkie).

Quite the brilliant post, I will agree. And since I grew up in one of those tiny Midwestern towns encompassed by Central City (Galesburg, Illinois; pop. 32,000) it hit me harder I feel than it would most.

Now I'm feeling nostalgic for the wide open expanses of my home. *sigh*

Even when you obsess on Vibe, which makes me yearn for death.

Say, maybe I should dig out my old APA post about AQUAMAN AND THE OUTSIDERS...

The flash can run around the worl in less then a second. Can he run a complete circle outlining central city in the same time?

Or does central city use some extra dimensional beam to hide most of it's pupulace?

Okay, I'm sorry, I can't help myself: delurking to say that it's not "principle industry" in the last caption, it's "principal". I'm sorry, but I must. Mrs. Johnston put bamboo slivers under my eyelids and locked me in the school supply closet until I learned the difference between the two.

it's their industry as a matter of, um, principle.

This is totally famous.

Brilliant as usual. Also peeking my head out of lurkerdom to pass on a good word. Brilliant. Keep them coming.

I want to live in Central City!

But only if Infantino draws me...

"This is totally famous."

Is that ... good? You teens and your hep lingo

Wow. In various stories, I always wondered why Flash didn't search the whole city in a few minutes. This answers questions that have nagged me since childhood!

Oh yeah, and as someone who only saw mid-size cities as a kid, I was totally unimpressed when I eventually saw New York. Everything was so much smaller than TV or comic books make it seem to be.

The big cities in America didn't impress me much when I saw them. But the one's in Japan blew my mind. It's on an entirely different level here. The entire east coast of the main island is like one big city.

But unlike Central/Keystone streets are only wide enough for one tiny Japanese car. And there're no street signs, either...

OK, I have lurked in the cyber-shadows long enough...no longer will I be one of the lurkers, for they are a cowardly superstitious lot.

"Lurkers" are to "Faceless Underlings" as De-lurking Posters Who Are Still Too Lazy To Create Their Own Blogs" are to:

Oh yeah, this string is about Central City. I have lived in Central City for many years. Alexander Luthor's pocket dimension from COIE was actually my bedroom closet. I have almost explored my entire street. My neighbor claims to have once met a man who had explored the entire city. He's crazy! He also thinks that Kyle and Wally are better than Barry and Hal, so consider the source.

Hey. I thought all cities in the US were like this! You know, as big as Wales or something.

You mean they're not?

"no longer will I be one of the lurkers, for they are a cowardly superstitious lot."

And now, a little haiku about Central City.

Weren't cities in the '50s and '60s generally more expansive than now? Just look at all those contemporary ads for huge cars, kitchens and back-yard barbeques...

IC#4, the Superboy fight starts is Smallville, KS, but ends in Keystone City, which implies that yes, Kansas is ALSO a suburb of the Twin cities.