Fear for Fun and Victory

Fear isn't much fun. But it is useful. When you're the Scarecrow heroclix, it can be both!

The Scarecrow's heroclix dials already try to represent his schtick. But wouldn't some actual FEAR pogs be fun (at least for him)! 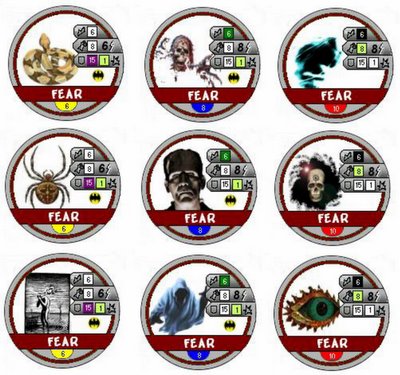 The 6-point Rookie Fear is represented visually by some common phobias (snakes, spiders, and open spaces [like the mind-numbing horror of untraversible cityscapes that is Central City]). They've got Willpower (because phobias are persistent) and Exploit Weakness (which is what phobias do), so try to keep this Fear at a distance!

The 8-point Experienced Fear has a longer range, and exchanges Willpower for Charge, so it's represented by generic monsters that pop out from behind corners and scare the bejeezus out of you. This is still the kind of Fear that is Batman's Ally.

The 10-point Veteran Fear is more like existential dread. This is not an Ally of Batman (but it still has Stealth so it can lurk, unlike those of you who came out during De-Lurking Week). What it gives up in endurance by not having Charge or Willpower, it makes up for by acquiring Quake (in your boots!), which can damage multiple victims and send them fleeing.

Like the T-Spheres we made for Mr. Terrific, Scarecrow's Fears are best used in combination with one another to engage opponents while their master attacks from another direction. Unlike the spheres, the Fears can continue even after Scarecrow is kayoed.

Here's to turning your Fears into your opponent's fears!
Posted by Scipio at 11:26 AM

You are getting mondo creative with those custom POGS my friend!

How about custom POGS of Green Arrow's trick arrows??

Oh or how about Bat-a-rangs!

Hm; how, though? Those aren't really, you know, "semi-independent" the way the T-spheres and Fears are.

I have more coming (just not for GA and the B-man).