Where should the new Justice League have its headquarters?

I know what I want.

I want them on the earth. Floating above us in a satellite or on the moon, like the Authority, being literally and figuratively above us? I don't like how that feels. And if see that satellite destroyed one more time (probably while Red Tornado is on it), I ... will ... scream.

I want them in the Hall of Justice. The Metropolis mountain and Happy Harbor hole have been done to death. At one time they were secret. They're not any more. The JL needs an attractive public building that evokes the iconic Hall of Justice that kids watched on television for (I think) 14 years.

I want that Hall of Justice in Washington DC. The League needs to come out of hiding and have a nice public HQ in the Nation's Capital. 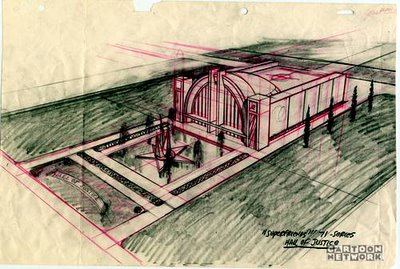 But Red Tornado has to be the cleaning guy like Ma Hunkle is for the JSA headquarters.

I absolutely agree that the Justice League needs a public friendly headquarters, something that says, "Come in. Take a look around. Ask us any questions you have."

On the other hand, the Justice League headquarters, no matter where it is, WILL BE ATTACKED. Probably by psychic gorillas on jet bikes.

So it would have to be like the Pentagon and less like the UN. So maybe not in DC, but just outside it, closer to Dulles than National.

The one place it shouldn't be? New York, or either of the new york clones. That's just dangerous.

Then the HOJ would have to be near the Mall.

Only tourists are at the Mall.

I say put them back in a Satellite. The Moon was too far away, but the satellite was great.

I never got an Authority vibe from them up there, although I did from the Moon HQ.

It you put it on Earth, in public, it will be attacked.

1) In the offices behind a strip club.
2) In the space above an underground bar, somewhere in Boston.
3) Stacked one on top of another, up the length of the Washington Monument.
4) In the café by the Burger King in the Knutsford services on the M6. Northbound.
5) Tesseract'd behind a snowflake in the morning drifts around Anchorage (/Morrison).
6) High on the hill of a lonely goat (/Andrews)

Lansing actually has a Hall of Justice, so I think they should move here. I ought to go photograph that sign.

A bunker in Detroit?


No, really, I like the idea of the headquarters being on earth, but I also like its being secret. A new, updated cave would suit me fine. Maybe a cave that is in Challenger Mountain. Which is on Blackhawk Island.

I think that whole 'it will be attacked' rationale is strong. I like the Satellite myself; it's the iconic JLA headquarters just like the inverted rocket-ship is the iconic Legion HQ.

But still, if you must have a Hall of Justice on Earth, put it somewhere away from major population centers. Like out in the middle of some desert somewhere, where if people want to go and see it it's a major pilgrimate-type thing.

Put 'em in Challenger Mountain! That way in the first issue the JLA could show up and forcibly evict the Challengers.

Man, I don't know. I kind of like the idea of them meeting up randomly on the street or in a bar or something and it shocking ordinary bystanders. Like, "What the hell are you guys doing at WAL-MART?"

I'm with Ken, put them back in a satellite.

I'd rather the League associate itself more with the world than with the country, so I'd prefer it not to be in DC if it's on Earth.

In the great hall of the Justice League of course.

Yes, I am a Superfriends baby. when I started reading comics, I was actually dissappointed the Wonder Twins were not members of the JLA. I kept waiting for Black Vulcan to show up.

I love the Satellite era, I really do but it's been done. And you know what? It's been blown up too. The Moonbase has been done. Let's have a Hall of Justice and let's do it cool before Alex Ross gets his hands on it and makes it look like a parody or base it off his dad's toolshed or something.

I love the Red Tornado but the first time I explained what he did to my new-to-comics friend, Reddy died in the story we were reading. Who has died more? Jean Grey or Red Tornado?

I agree with methane that if we're putting the league on Earth, they shouldn't be in Washington DC. Put them in Geneva or let the UN weigh in with its opinion of where it would like them.

They might be better served in somewhere like Somalia or Serbia or Pakistan or another place where the presence of superheroes might do some good rather than somewhere ornamental.

my vote's for the satellite. then someone should attack and destroy it. and then, y'know what, they should do it all over again. just keep wrecking that thing.

the JSA already has the HQ/museum thing down.

Otherwise, perhaps it could be symbolically placed at the geographic center of the US mainland, roughly equidistant from both coasts.

That'd probably be in the middle of nowhere, so the populace would be safe.

Put 'em in a Winnebago with JLA painted on the side of it and let them roam around America fighting crime whereever they find it.

Scipio, please! You don't put the JLA in Washington, DC.

You put them in Federal City!

Now that Bludhaven's been chemo'd, they ought to put the Hall of Justice in Newark or Hoboken.

Or one of those other iconic Jersey towns that people who don't come from there think of as corrupt and run-down.

If they're going international, they should put it in Den Haag.

What if we don't want a Justice League?

They could put it where Avengers Mansion used to be. I heard that Tony Stark bum didn't bother to clean it up...

Shouldn't there be place enough for the whole JLA, all incarnations in the Fortress of Solitude? Clean, safe and far away. And they can always have battles with psychic penguins on jet bikes.
***mmmhmmm***
jet bikes...

I look at that Hall of Justice and I think it looks like the Jedi Temple. Plus there is no parking.

I say, put it in the middle of the Atlantic Ocean - that way, Aquaman can charge rent.

Maybe they could pick up a second hand SHIELD Helicarrier?

Leaving the headquarters aside for a second, it's kind of Red Tornado's job to get blown up. Plotwise, I mean. To establish your bad guy as a BAD guy. The problem is, after the 80th time you've seen it (even in the cartoon or Alex Ross' Justice) you don't think, "Holy crap! That guy blew up Red Tornado! He's hardcore!" You think, "Damn, the JLA should check the warranty with T.O. Morrow."
Word verification: hmarcz, which I'm virtually positive Reddy has screamed while blowing up...

Huh. There's a Hall of Justice in Lansing? The JLA should move here, man.

I think they need both a public "Come in, look around, get to know us" Hall-of-Justice style public headquarters and a satellite/bottom of the ocean/inaccesable private headquarters.

But also assume that it's a magnet for crazies and gonna be destroyed fairly consistently, like the Flash Museum.

THEREFORE; You need a war bunker, a heavily defensible, isolated, and secret secondary homebase, where you can go-to-ground during the big, BIG cases. Stock this one fulla the dangerous trophies: Qwardian Weapons and pieces of Starro and Mirror Master and Cap'n Cold guns and stuff, so that they're not easily rip-offable by Catwoman or whoever as they would be in the publc building.

I like the idea of keeping it underwater so that Aquaman can maintain it. That gives him that spiffy "useful" feeling.

This also gives the JLA options if there IS dirty skullduggery that needs doing out of the public eye.

Put them in the St. Louis Arch. That thing needs a function, other than world's largest croquet wicket. And when bad guys attack and destroy their HQ, nothing of value will be lost.

I hate the Arch.

Oooooh, look! A message from the future! How are things the day after tomorrow?

Its gonna cause an argument no matter what. Batman wants a cave, Superman wants a fortress, Green Lantern wants to regain conciousness...

They should put it in Peter Parker's bedroom. Then they can access it by sliding the football statue on the mantle that hypothetically never gets dusted by Aunt May.

Why did nerdy Peter Parker have a football trophy, anyway?

The solution in the cartoon was to give them both an orbital base, where most of the JL's business was handled, and an embassy on Earth. I kind of like that idea.

Barring that, though, I wouldn't mind an artificial island, like the Avengers' Hydrobase or the Ultimates' Triskellion.

You know, that reminds me.

The JSA headquarters is also supposed to be a JSA museum. You know what you NEVER see in the JSA comic?

Tourists! You only see the curator and members of the JSA.

I could understand if Hawkman's St. Roch museum was under attended. If my city had a nightly Mardi Gras celebration, I might not be so keen on looking at old anvils that are only meaningful to you if you yourself used them in a previous life.

But a New York SUPER HERO museum? If that can't attract tourists, then the economy really IS in trouble.

actually, here's a shorter image to the real-life hall of justice:

damn, looking through your archives here... did you write this before the new JLA came out? I think Brad Meltzer owes you some idea money.

But I'm sure the next writer will still destroy the new satellite and Tornado too.

Hmm, instead of a headquarters...

After Batman loses his billions to a lawsuit, and Superman gets Kryptonite arthritis and can't squeeze diamonds into coal, the JLA end up just meeting at each others' apartments and houses, rotating on a weekly basis. Everyone brings a dish...

Superman, carrying a caserole dish, flies across the skyline of Metropolis on his way towards Keystone City. He spots Green Lantern towing a pizza box and a couple of 2-liter soda bottles. "GL! Aren't you headed the wrong way for Keystone?"

"Keystone? I though we were meeting at Bruce's new place this week."

"Didn't you get the message? It's been switched to Wally's. Who was supposed to call you?"

"Arrow. It figures, he's probably out getting his shaft polished. Man, could Wally's place be any smaller?"

"Tower... Hey, that's an idea! Can we get the Titans' place? Rent it out or something?"

"Didn't hear, huh? They got evicted. They've been holding all their meetings at a Mickey D's for a couple of weeks now..."