Meanwhile, back at "The Real World: Detroit"... 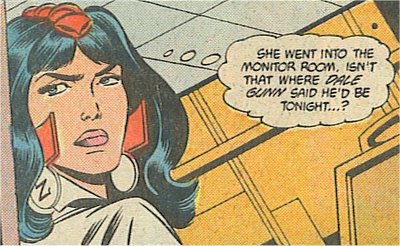 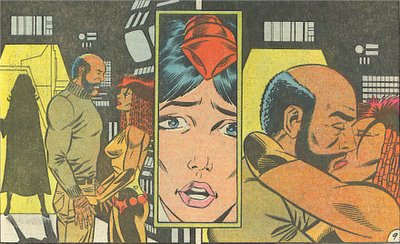 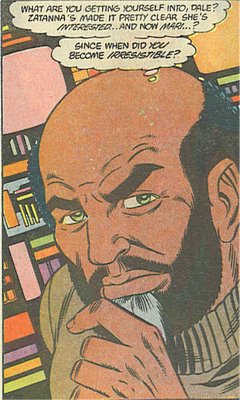 If he's so irresistible, howcum Gypsy and Sue aren't panting outside the door of the Monitor Room? Huh? Well? Can't answer that, can ya, smart guy?

Who's the black handyman
That's a sex machine to all woman?
DUNN!
Ya damn right!

They say this cat Dunn is a bad mother
SHUT YOUR MOUTH!
I'm talkin' 'bout Dunn.
THEN WE CAN DIG CONWAY!

Hmmm. That never occurred to me.

The idea that Vibe is gay, yes.

The idea that Gypsy is a lesbian, no.

Can't wait to see more on this development.

When you prepare your entry on Sue Dibny, please include one Murphy Anderson illustration. Sue is totally hot.

Gerry Conway's running buddy, Marv Wolfman also did something similar to this entire inexplicable Dale Gunn saga when he was writing Teen Titans and had Donna Troy/Wonder Girl fall madly in love with a total shlub named Terry Long. Rght.

I have just one thing to say.

When the movie comes out, will James Avery (the father from Fresh Prince of Bel Air) play Dale Gunn?

Is it just me, or does anyone else see Dale working in a school cafeteria in South Park, Colorado?

Did ALL of this happen in the first issue?

If I was Dale I wouldn't question it or be concerned it's a villain's plot. I'd just go with it and ride those ponies till I died.

"So! The villainous Key was manipulating the emotions of our wimmins to fall in lust with you as a distraction, Dale Gunn!"

" "Gypsy's a lesbian."Hmmm. That never occurred to me.

I mean, she has to be. She didn't try to sleep with Dale.

" Did ALL of this happen in the first issue?"

Oh, and much more, Vice, much more. But it was an Annual, they were bigger. Don't you think it's time for the JLDetroit Trade Paperbacks, gang?

" Is it just me, or does anyone else see Dale working in a school cafeteria in South Park, Colorado?"
Hey, I wasn't gonna say it!

"When the movie comes out...
By the time "Justice League Detroit: The Movie" comes out, the Legionnaires will be at the premier.

And Piper, who's occasionally a hero. Short list, I know, and half of them are blue men from space, but it's the best I can do off the top of my head without citing freaking Northstar.

The stuff with Zatanna in the nightgown and the cookies happened in the JLA Annual #2.

THEN, they had the 4 issues with the gimmick covers - each featuring one of the new characters - that were actually linked in a mini-poster, #233- #236.

Then, #239 was a focus on Vixen issue and THIS issue had the scene where Zatanna snuck up on Vixen and Dale smooching.

I think #250 was the anniversary tribute to gay sex issue that had Steel and Vibe getting it on, and Gypsy in the sack with Sue Dibny.

It's things like this that make me regret all my years as a Marvel zombie. Thanks for exposing me to this, Scipio.

Not quite old enough for the 'Gunn', whether or not she's a lesbian.

Dale Gunn. It takes some work, but eventually you can get that into an anagram of "Gerry Conway."

I mean, if you add and subtract a buncha letters. Still. Gerry Conway. As a sex-machine black mechanic. Even so: Gerry Conway.

Why else would be populate the League with Vibe and Steel? To throw the incredible manliness of Dale Gunn into sharper relief.

I love how he scratches his chin in deep contemplation.

The look on his face when he strokes his beard and asks "Since when did you become irresistible?" leads me to believe it's a rhetorical question. (The unneccessary answer? "Since childhood, baby.")

It's the eyes. Green eyes are hot.