I will miss him very much... 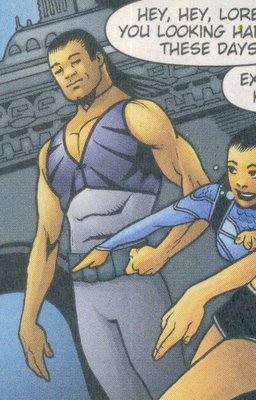 Jesus Herbert Walker Christ! What vendetta do the DC writers have against Aquaman that they keep offing his children? Seriously.

I bet Tempest is thanking Poseiden that he's adopted right about now.

When did Koryak die? In Aquaman #37 it looked like the Spectre's hand just missed Koryak as it slammed into Atlantis. There's no corpse. And without a corpse, there's no death. :)

Dasbender, check out the latest issue of Aquaman, out today. It's a pretty gruesome end for Koryak. And while there is no body shown, it's strongly implied that Tempest, Dolphin and Cerdia (uh, retconned to be a girl now I guess) have also been squashed, though Tempest likely teleported.

Perfectly stupid waste of an interesting character, and one of the few non-sterotypical Native American characters as well. Dumb move beyond words to describe on DC's part.

Ack, that's awful. :-( Do they really have to kill off/imply they're killing off so many characters?

On an unrelated note what happened to the poll, links and archives.

Then again, I also don't care. But he has no place in my own little Aquaman pitch.

" On an unrelated note what happened to the poll, links and archives."

Nothing; I still see them...

You're sidebar's gone in IE because of the Kyle Rayner picture you have imbedded in the list about GL boxers. Place that after the closing tag for the list and you're good.

DC is out to destroy my faveriots.

Its sad, Koryak finally got past all his problems, to start to become a great hero and his killed. I'm glad I'm not the only one disapointed with this. I'll miss you Koryak.

Scipio, what about Vulko? Another great character lost, his Aquaman's Perry White!

This is pretty damn depressing. I just picked up the bulk of Arcudi's run a couple weeks ago and it's damn good stuff - good, solid, core concept storytelling that really knows what it's doing with the character - and of course now I get to see it all wiped off the map, complete with mass character death, in time for goofy medieval drama with a stand-in character.

And what the hell is up with Aquaman's kids getting killed all the time? Even Robins don't have this kind of mortality rate. Christ.

I couldn't agree with you more, Lungfish.

You should write DC about it.

While wearing a "Sword of the Absorbascon" shirt...

Scipio, dude, Kory's death has brought us all low. But it's been more than a week. You can't let this stop your noble campaign to speak well of the DCU, no matter how much the words hurt. you need to get right back up there in the Absorba-saddle and preach the power of good comics to the masses once more.

Do it for the fishcake, Scip!