"Wha -- what?," the Superman fans are sputtering. "But ... he's Superman! He has superventriloquism and super kidney function and he can see you coming for miles with those super-peepers of his! He must be able to not only dance, but super-dance."

Dream on, fanboy. Superman's a shufflefoot. 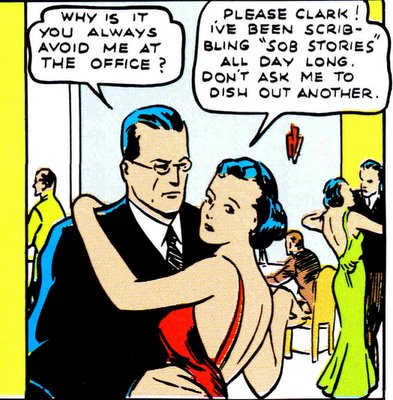 You know, those people --guys, mostly, particularly big luggish cornfed Midwestern farmboys -- whose attempts at dancing amount to shuffling their feet across the floor with only occasional accident correspondence with the music, desperate to maintain full sole-to-floor contact with both shoes at all times as if failure to do so would cause them to fall to the dancefloor in a hopeless tangle and flop helplessly like a walleye in a rocky motorboat, and who smash their partner as close as possible so that no one can see their feet.

Poor Lois has to dance with Clark a lot. You know, so some gangster can come along and embarrass her by shoving a grapefruit in Clark's face.

Lois feigns disgust as Clark picks the rinds out of his nostrils, but secretly she's relieved just to get off the dance floor, thinking, "googly-moogly, it's like dancing with a shopping cart with a bad wheel." 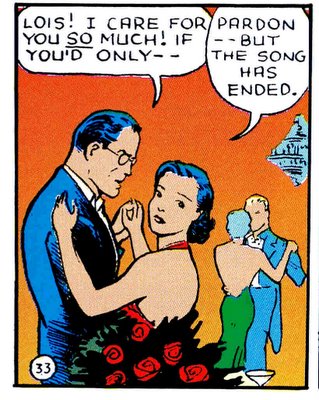 At one point, it got so bad, Lois was driven to Defensive Dancing. "Ha!" she aspirated. "I'll wear a dress made entirely out of an exceedingly thorny, yet beautifully blooming rosebush! Delicate Clark won't be able to dance with me without painfully stabbing himself all over."

As always, the joke's on Lois. Her secretly indestructible date doesn't notice the thorns and merely holds her more closely so as to supersmell their fragance, pressing the thorns deep into Lois's lovely gams, which leave a trail of seeping blood as they shufflefoot across the dancefloor.

Desperate to escape his diamond-vise grip, she considers chewing off her arms but instead opts for repeated pleas to the writer through the Fourth Wall; "the song has ended. NO, I'M TELLING YOU, HAVE THE SONG END ... NOW, FOR THE LOVE OF GOD!"

Further evidence? In the panel below, unabashedly stolen from my friends at the Comic Treadmill, we see Clark Kent as the (*snort*) Sultan of Song , spinning platters as a latenight DJ. 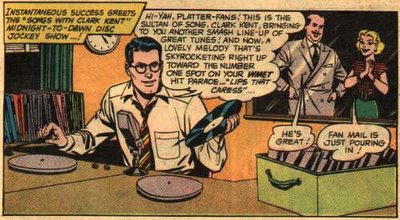 Hi-yah! What a goober. Anyway, everyone knows DJs can't dance. It's why they become DJs. Case closed, people.

Let's try a little mental exercise. Picture if you can, George Reeves dancing or Christopher Reeve dancing (yes, I mean BEFORE, wiseguy). Not, pretty, is it?

Tom Welling's not much better. I mean, sure he's pretty, but on Smallville he only ever dances an aimless shufflefoot with Curiously Asian Lana Lang and the few times he has to go to some real club you never see him dance. He's too busy being concerned. Or sincere. Or supportive. Or psycho. Or something else traumatic. 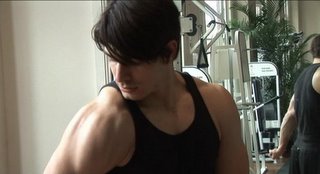 And can you picture Brandon Routh shaking his groove thang to the pounding beat at some stylish polysexual discoteque in a tight black tanktop or his shirt already off with his arms waving wildly above his head while he gyrates his hips into the nearest other dancer, gender unspecified?

Hm. Okay, that one is fairly easy to picture, I guess. In fact, it's hard not to picture. IN FACT, I think I still have the video file somewhere on my computer... .

But that's just Clark Kent, you say. What about SUPERMAN? Surely he can do something more than a meandering shufflefoot dance! 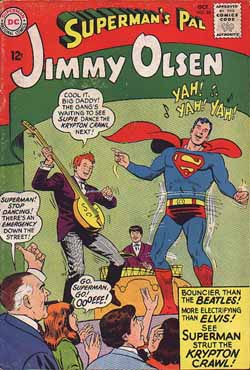 Shudder. If he can, you don't want him to.

I really, really, really, did not want to have to show you that, people. But some of you just don't trust me. And, so, because of those people, you had to endure Superman strutting the Krypton Crawl.

Let's-- just agree not to discuss this matter anymore. Suffice it to say, "no, Superman can't dance." 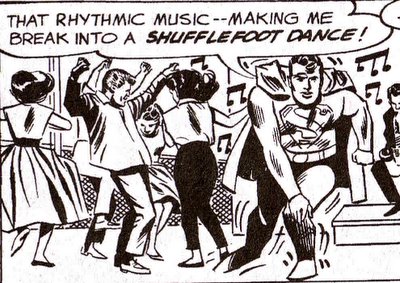 Ah yes -- but how do you explain this?

That is perhaps the most horrifying thing, I have ever seen. And I was a Navy Seal.

Amy, I can still see it when I close my eyes!

And the "shufflefoot" panel is just as disturbing. I have to assume that the previous panel showed the DJ announcing, "Just the dwarves, now! Everyone else off the dance floor!"

"Just the dwarves, now! Everyone else off the dance floor!"

I think I saw that episode of CSI.

Aw, give Smallville's Clark a little more time with Lex. One gets the feeling that Lex is in that blurry Brandon Routh video somewhere.

I hope you're happy. Now I can't stop "If Bubba Can Dance" by Shenandoah from running through my head.

Damn you, Scipio, and damn this country-fried state I live in.

I once wrote about the story that Amy references. After seeing that image, it's probably not suprising that I titled the entry Superman made me gay.

Superman, die because this is the way I want to remember you.

Amy, you rock my world. I pride myself on 1970s Super-goodness, but I've NEVER seen that panel before.

Where, oh where, did you find it?

I sincerely apologize for the trauma. No, wait, no I don't.

It looks like that's where Fatboy Slim and Christopher Walken got the choreography for the "Weapon of Choice" video.

Where, oh where, did you find it?

Scans_daily is one of the best reasons to keep a LiveJournal, even if you just lurk. I swiped the little gem above from this post. (WARNING: the other scans include more dancing from Clark, Jimmy Olsen in that God-awful purple suit, and Clark winning first prize for his John-Travolta-from-Saturday-Night-Fever impression.) Sadly, I don't know which issue it's from. If you can figure it out from the other scans, I'd love to know the issue and number -- this one is goofy enough to earn it a spot on my "must own" list.

Haw! Shufflefoot! One of your best character assassinations, Scipio!

He can't dance, but you know he tries anyway. I can easily envision him doing the Funky Chicken (poorly) at every Smallville wedding over the last decade.