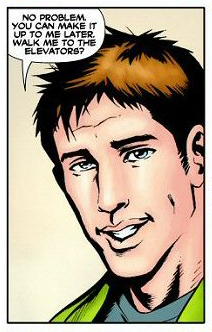 Well, as mentioned here, Todd Rice (better known as the world-destroying wacko Obsidian) is finally coming out and has a new boyfriend. No, really. It's in Manhunter, which everyone knows is really good, but no one reads.

Devon's been trying to get me to add Manhunter to my subscription for months. Devon's very persuasive and there's no one whose comic book opinions I respect more. But you know, Devon doesn't have grey eyes and a strong Roman nose and manly but unthreatening sideburns and JBF hair y los labios del deseo. Todd does.

In an interview, author Marc Andrecheyko made the point strongly that in having Todd Rice come out he is not trying to make any point strongly. There are people who are gay. Todd is one of them. End of subject.

He has not been made gay so he could get bashed, or get HIV, or adopt a baby, or have conflict with a colleague, or become some teenage heroine's unrequited crush. Score one for DC! Personal matters like the fact that Alan Scott is left-handed, or that Hawkman has brown eyes, or that Obsidian is gay makes them different from most heroes but it doesn't have to become a huge plot point, for pity's sake.

Todd has always been portrayed a whiny, self-pitying, underconfident nebbish. And that, frankly was on his good days. As JSA readers know, on Todd's bad days he hung with Mordru and Eclipso and nearly destroyed the world.

Oh, but look at that face. That's not the same guy at all! NOW I understand....

Todd's problems were because his dad's from Earth-2 (his mom, too, I think). Once Alexander Luthor fixes everything, we get this new, improved Earth-New Todd Rice. Who's not evil. Who's well adjusted. Who's utterly dreamy and superpowerful in the dark. Thank you, Alexander Luthor; god bless you.

Remember, from now on, if there's anything you don't like about a character, just blame on the mix-up on multiple earths. Mad about Jesse Quick's behavior or Courtney's midriff? Those aren't the REAL ones, the ones from Earth-New. Incensed that Vibe or Ice is dead? It's okay, those were just the Earth-1 versions, and ones from Earth-2 or Earth-New will be along any day now. Still think Batman's an ass, even though he now realizes he's an ass who needs Dick badly? Don't worry, the Earth-New Batman will be scary and nice all at the same time.

Infinite Crisis, you see, is our personal lord and savior. It's all about making Todd gay. And bringing back Vibe. And creating a Batman who is all things to all people. And making everything just the way that I personally want comics to be. Oh, and you, too!

What's that, Todd? May you envelope me in your shadow form and explore my inner horrors? Yes, Todd. Yes, yes, yes.

Email ThisBlogThis!Share to TwitterShare to FacebookShare to Pinterest
Labels: gay

He has not been made gay so he could get bashed, or get HIV, or adopt a baby, or have conflict with a colleague, or become some teenage heroine's unrequited crush.

And yeah, his mother was from Earth-2. She was the crazed supervillain "The Harlequin," who reformed, married Alan Scott, then ran away on their honeymoon and never came back. She had her twins and then, I believe, committed suicide. The twins were raised in seperate foster homes, not knowing their heritage or that they were twins.

Still think Batman's an ass, even though he now realizes he's an ass who needs Dick badly?

You mean Todd wasn't? I mean, Atom-Smasher was his best friend, and when his best friend tried to date Fire, Todd was all like "Nah man, it'll never work," instead of high fiving him and asking him how far he got. I just assumed Todd was jealous.

And those father issues?

Although, I will be terribly thrilled if Todd satys a good guy now.

Actually, Todd's mother was the Thorn. His stepmom is Harlequin.

I figure Obsidian wil be evil again... it's kind of inevitable when a character crosses over to the dark side the way he did. Will this make him the first openly gay supervillain? Nothing wrong with that, but given how few heroes there are, it could be bad PR for DC.

Regardless-- I like Obsidian better as a confused bad guy. As a hero, he always faded into the background (imagery intended).

Indeed, Ken. Obsidian made a GREAT bad guy, but a not so great hero...

Officially, Pied Piper would be DC's first gay supervillain, thought that's arguable because he wasn't openly gay until after he reformed. Geoff Johns implied that the other Rogues knew, even if the Flash and the audience never caught on.

And then there's the Joker, who pretty GAY for Batman (implicitly and explicitly, depending on the writer), and no character quite screams "unwitting beard" as loud as Ms. Harley Quinn.

Retcons don't count, although I suppose Mr Joker does. But they dealt with that in an issue of Flash where Wally asks the Piper, and he says Joker defies categorization.

I really liked the gay Piper in those days. They better not make him bad again.

Since you're so good at detecting which superheroes play for the other side, why didn't you comment on Superboy fawning so much over Alex Luthor? And what did they do in that mirrored rooms for ten years while Superman was being all gloomy over his wife?

Wow, when did Todd get attractive?

Damnit. This is blowing my mind.

Awww... And here I am without my copy of Manhunter. That's what I get for checking this site obsessively...

Naw, as far as openly gay villains go, Cannon and Saber have Todd and Piper beat for some time.

Okay, now I must start picking up Manhunter...

I've been reading Manhunter for ages. Had one of the coolest fill-in issues I've ever seen a couple of months ago.

I didn't realise I wasn't supposed to actually be reading it. Did I miss a memo?

Didn't Obsidian come out during an issue of Gerard Jones' Justice League ten years ago? Or am I on crack?

So, does this mean Obsidian will be joining your all gay Heroclix team? I can see him and the Fadeaway Man making a good team together (though not in *THAT* sense wink, wink).