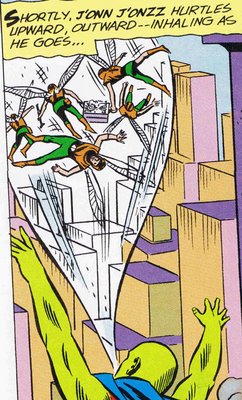 Sometimes, when I think about the Martian Manhunter, it hits me: he sucks. He sucks alot.

Look, he's sucking now! There's MM (JJ to his friends), fighting crime of the alien bee-men variety, and "inhaling as he goes." If I were a crimefighter, that's how I'd want to do it: inhaling as I go.

Then I realize, I'm underestimating J'onn. J'onn not only sucks, he blows. Big time. The Martian Manhunter blows like nobody's business. 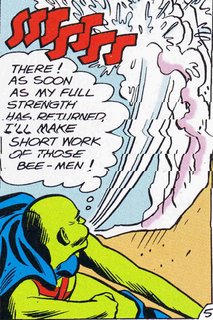 By the way, I hereby nominate "As soon as my full strength has returned, I'll make short work of those bee-men!" for the Word & Thought Balloon Hall of Fame.

When I go to parties, I like to pick a phrase like that from an old comic book and spend the evening trying to work it into casual conversation. It's worlds of fun. Of course, it has become increasingly harder to do as I consequently get asked to fewer and fewer parties...

I understand why J'onn does what he does. If I had superstrength, flight, omniutile Martian vision, telepathy, invisibility, intangibility, shapeshifting, and the ability to draw gold from seawater with my mind, I would spurn them all. Too easy. Too unoriginal.

Yes, if I were a superhero, I'd fight crime by sucking and blowing. It's fun. It's cool to draw. And nobody else can do it. Except Superman, but we kind of all agree not to talk about that, because, you know, J'onn's kind of sensitive.

If you haven't realized it yet, this is one of the Ten Clues You're in a Silver Age JLA Story: J'onn sucking or blowing, or, as I like to call it:

How powerful is the Martian Manhunter's marshalation? Powerful enough to make a mirror. 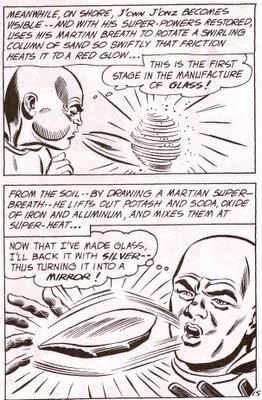 Hal Jordan and Kyle Rayner must love this guy, and probably never get more than arm's length away during a big fight. "Very well, Green Lantern, I shall craft you a mirror with my marshalation again, but I can assure you your hair is fine..."

Oh, and for the record, large quantities of Oreos do not exactly freshen your breath:

I mean, how bad does your breath have to be to make a demon from hell say "Ugh"?

Ah, Martian Manhunter, the Rodney Dangerfield of comics. Occasionally, they'd let him use his shapeshifting ability in a limited way, like superstretching his body.

So pretty much all you ever got to see him do in the Silver Age JLA was suck, 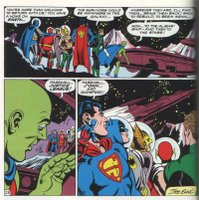 blow, and stretch out his arms.

Then they got rid of him ... and replaced him with who?

The Red Tornado
and the Elongated Man.

I saw the title. and thought this was going to be about the Marshall Plan.

Not having read those early JLA issues, but reading them via the Showcase volume, I continue to be surprised by how often he uses this blowing power. I don't remember him using that in, say, the last 10 years.

(The Absorbascon Verifier isn't keeping up. "PXXSPW" Is a fifth dimentional imp, not a Martian.)

"As soon as my full strength has returned, I'll make short work of those bee-men" is a perfect haiku. Perhaps that is why you like the quote so much Scipio.

That's our J'onn, innit? Godfather of the Silver Age! The big blowhard...

I also recall him blowing and sucking a lot in the early Fox/Sekowsky JLA. I often wondered if it was a way to differentiate him from Superman, who didn't blow/suck quite so hard, er, often in those issues.

Some great art by Big Mike there, Scip; and that last set of panels is classic Dillon-Giella (the only time I really liked Dillin is when he was inked by Giella).

Oh, you're just bitter because he won't return your calls, Scipio.