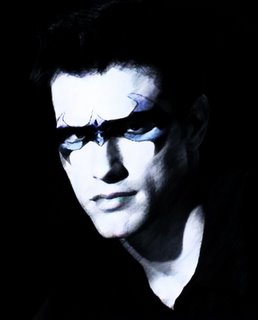 This is what the folks at Big Monkey are calling the "Peyman Theory" after the customer who devised it. It may be all over the internet elsewhere, but I haven't heard it until today.

Assume, for the moment, that Earth-2 will remain, perhaps as the basis for a new Earth-2 based imprint.

Plots have been arranged to loosen Dick's ties to Earth-1. He has been separated from his two groups, the Outsiders and the Titans, and Bludhaven, "his" city, is gone.

There are also metatextual clues. For example, interviews have emphasized that Nightwing has a very important but unspecified role in the Crisis and its aftermath.

The truth could be something simpler, like Bruce taking some time off and Dick taking his place, with no Earth-2 about it.

But the Peyman Theory still intrigues me.
Posted by Scipio at 8:49 PM

That would certainly let Grayson take the leading role he wouldn't otherwise have as long as Bruce Wayne is not allowed to age.

Unfortunately, I haven't gotten the impression that they were truly going to bring back multiple Earths the way Infinite Chrisis has played out so far (but I haven't been following buzz/spoiler sights).

But if they did bring back Earth 2, taking a member of Earth-now's overpopulated Bat-Family and sending him/her to take Huntress' place would make sense. It would also be a switch from the silver age, when Earth-2 characters kept taking residence on Earth 1.

Those of you who don't check out the advance comic solicitations might consider this a SPOILER, so you've been warned.

Unless DC is totally misdirecting us with fake covers then the new Earth-2 won't be permanent. April solicitations show Dr. Mid-Nite and Mr. Terrific back with the JSA after being left behind whent the others were "returned" to E-2.

Jay is still part of the team too, so it looks like his power loss is only temporary as well.

I don't think Earth-2 (or any other Earth) will stick around either.

BUT... there's nothing to say characters that are one Earth now couldn't venture to the other. Lord knows they did it all the time in the Silver Age.

I think its far more likely that they're removing Dick's ties to the "Nightwing" part of the DC Universe to allow him to become Batman for the OYL gap and the first year post-IC.

Of course, eventually Bruce will take back up the mantle and Dick will go back to being Nightwing. Probably by the time the next Batman movie hits theaters.

Yes, I'm with k26dp. I think that Alex Luthor will indeed 'fix everything,' and recombine the Earths in an entirely new configuration.

Off topic but is Vibe the movie meng real? It will come out in just over a month if it is. How could anything about the wonderful rolemodel Vibe not me G rated?

My theory, based on a lot of small possible clues as well as the gigantic piece of possible foreshadowing in Infinite Crisis #1 in which the Bat-Signal is seen pointed at the Spectre's chest, is that Bruce Wayne is going to die and take Jim Corrigan's place as the Spectre. Nightwing then takes his place as Batman.

Verification word: ybquenmr. Indeed, why would anyone be Q anymore?

Ha, no, Vibe the Movie isn't real (if you'll check the date carefully, you'll see it's a nonexistent one!).

Not YET anyway... But I think it's evitable, really.


As for the "Bruce/Spectre" theory, I had heard that before, but if you've read IC#4, you've seen who the new Spectre is, and it isn't Bruce.

Yeah, but is that permanent? The Spectre clearly doesn't want to be in that guy, whoever the hell he his. Both he and Batman are both figures of Vengeance-with-a-capital-V who are both consumed with guilt for their misdeeds and want forgiveness. They're totally simpatico.

"Yeah, but is that permanent? The Spectre clearly doesn't want to be in that guy, whoever the hell he his."

The Spectre never wanted to be in Jim Corrigan, either, or in any of its previous hosts, for that matter. The Spectre is happiest when it's roving the earth as a crazy mindless skull-faced spirit of death, killing everything and anything in its path, if the Ostrander/Mandrake series hasn't totally been retconned by Johns et al by now.

And the Spectre would really, REALLY not want to be tied to Batman, since Bruce would try to keep him from killing ANYONE, even the Joker, while Allen has at least killed perps in the line of duty before. In fact, the whole plot that lead to his death started with him shooting the Black Spider to save Montoya's life (during War Games... wow, everything IS connected).

The only "retcon" that I can see from two pages of the new Spectre is that he seems to be tied to Allen's corpse, while the previous two Spectres were clearly unattatched to their former bodies. I also wonder what skin color the new Spectre will have. Will he still be albino white, but with Allen's facial features? That could look pretty weird, though that's not necessarily bad for scariest being in the DC U.

The Spectre is happiest when it's roving the earth as a crazy mindless skull-faced spirit of death, killing everything and anything in its path, if the Ostrander/Mandrake series hasn't totally been retconned by Johns et al by now.

Actually, I think that's pretty much how the Spectre has been handled since then, including in all the run up to the current shenanigans I have seen. He's been played for a villain, mostly, hasn't he?